It’s time for the second half of Akame Ga Kill! (Episodes 13 to 24) to arrive in UK stores on both DVD and Blu-ray. The story picks up where it left off (as it obviously should!) as Night Raid, a group of assassins who only assassinate bad people associated with a cruel regime, are coming up against the Jaegers, a group of powerful people under the direct control of the corrupt Prime Minister of previously mentioned cruel regime. Most people of both sides have special weapons known as Imperial Arms that grant them either special abilities, armour or just a really durable and powerful weapon. Sounds simple, and that’s because it is! Akame Ga Kill! does a lot of things right, but complex plot isn’t one of them.

That being said, there is much to praise in this half. First off a lot of the Jaegers are actually very nice people who just happen to either be naive enough to think the ruling body being corrupt is just a rumour, or have accepted their role in unpleasant times as the only means to provide for their family. This adds an extra layer to one of the things I happily praised in the first collection, namely author Takahiro’s willingness to kill off characters, sometimes without fanfare, from both the good and bad camps. This view of storytelling doesn’t change in this half, let me tell you. The feeling that anyone could be killed off in any fight is a very rare feeling in this genre of manga / anime, so it’s very refreshing.

The lead characters, Tatsumi, a young man from a poor village who wound up joining Night Raid to bring down the corrupt government he was about to join, and Akame herself, a skilled assassin whose cold demeanour hides a more innocent side, play off each other well, without being an obvious straight-up romance plot. Likewise the lead antagonist (beyond greedy Prime Minister Honest… yes, the corrupt PM is called Honest…) Esdeath is a fun character to follow, being the leader of the Jaegers and an extremely powerful fighter who happens to have fallen for Tatsumi, and hardened veteran fighter and leader of Night Raid Najenda compliments her well on the “good” side. The rest of the two groups have pleasant enough characters, although I wouldn’t get attached to many of them…

A few negatives have to be mentioned, though. For a start, a lot of new villains are introduced with big fanfare, then killed off almost immediately. It gets a bit annoying in the middle of the set; you get the feeling they’re just delaying time before the two sides clash for the big finale. The ending is a bit weird, but from what I’ve read, it’s one of those “the anime caught up to the manga so they created their own ending for the show” things (although some chapters released just recently have borne some resemblance to the end of the anime, so maybe Takahiro tipped them off a bit). Still these little things aren’t a big deal, the whole series is basically an excuse for different large-scale fights, and they are definitely fun to watch.

Collection 2 comes with the usual array of extras, clean opening and ending (in this case “Liar Mask” by Rika Mayama and “Tsuki Akari” by Amamiya respectively, for Episode 15 onwards, the prior two episodes still featuring the opening and closing of the previous set) and the rest of the “Akame ga Kill! Theatre”, which is the seemingly now compulsory comedy shorts.

So, Akame Ga Kill! wraps up with Collection 2, and I can give it a good recommendation, though really I can’t see anyone buying Col.2 without having at least seen the first 12 episodes. If you’re looking for subtle storytelling or a twisting plot then you’ll have to look elsewhere, but if you want to see some bloody battles where you actually don’t know who will survive on either side, then this series gets a high recommendation from me. 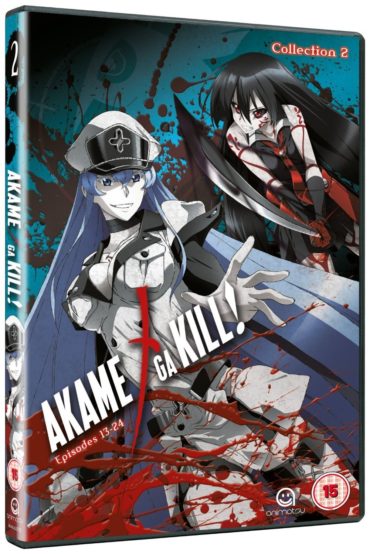