Naoko Yamada, the director for A Silent Voice, will be attending the Glasgow Film Festival screening on Thursday 23rd February 2017. She will also be offering a special Q&A segment alongside the knowledgeable and veteran of anime culture Jonathan Clements.

Naoko Yamada has been part of Kyoto Animation for a long time; supporting the studio by doing Episode Directing and Key Animation for Clannad, The Disappearance of Haruhi Suzumiya, Nichijou: My Ordinary Life, and Sound! Euphonium, in addition to directing the K-On! series, Tamako Market and Tamako Love Story.

El Presidente of Anime Limited, Andrew Partridge had this to say:

“We are extremely privileged and excited to be able to bring a director of such vision as Ms Yamada to the Glasgow Film Festival alongside the GFF. It’s a great opportunity to see one of the top anime films of 2016 in the cinema with the director and an excellent chance to ask questions about this touching and sensitive film. It really is not to be missed, and I am personally looking forward to it.”

A Silent Voice Plot Synopsis:
Shoya Ishida starts bullying the new girl in class, Shoko Nishimiya, because she is deaf. But as the teasing continues, the rest of the class starts to turn on Shoya for his lack of compassion. When they leave elementary school, Shoko and Shoya do not speak to each other again… until an older, wiser Shoya, tormented by his past behaviour, decides he must see Shoko once more. He wants to atone for his sins, but is it already too late…?

A Silent Voice will be available to watch in theatrical screens on March 15th with an English dubbed home release planned for sometime this year from distributor Anime Limited. 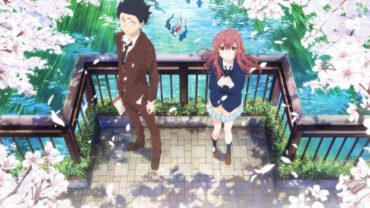