Based on Level-5’s hit Nintendo 3DS video game franchise, Manga Entertainment is very pleased to announce that the Yo-Kai Watch television anime will be coming to DVD in the United Kingdom on 8th May 2017. The release is currently available to pre-order on Amazon for £19.99.

Manga Entertainment describe the story of Yo-Kai Watch, as follows:

Primary school student Keita Amano’s curiosity is as innocent as any other child’s his age. But when one day he decides to venture deeper into the forest, he encounters a small and mysterious capsule. Out from its depths comes Whisper. After 190 years of imprisonment, this ghost-like creature is glad that someone has been kind enough to set him free. He decides to reward Keita by becoming his guardian against supernatural forces. Whisper is one of many Yo-Kai that exist in the world, and provides Keita with a special Yo-Kai Watch, which enables him to see and interact with all the other Yo-Kai. Yo-Kai Watch follows Keita, Whisper and the cat spirit Jibanyan as they encounter Yo-Kai, befriend them, fix all the trouble that they so often cause, and, with the help of the watch, use the powers of previously encountered Yo-Kai to aid them. Young Keita may have been just an ordinary primary school student when he first encountered the Yo-Kai, but the many adventures that follow his discovery provide him with invaluable experiences and precious life lessons that help him grow.

The first season of Yo-Kai Watch was originally broadcast on Cartoon Network last year. The second instalments in the video game series, Yo-Kai Watch 2: Bony Spirits and Yo-Kai Watch 2: Fleshy Souls will be released in Europe for the Nintendo 3DS on 7th April 2017. 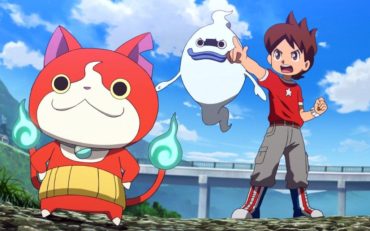