From ancient Chinese legends comes a beautiful tale of love and sacrifice.
In a world within our world, yet unseen by any human, the beings there control time and tide and the changing of the seasons. On the day Chun turns sixteen, she is transformed into a dolphin to explore the human world. She is rescued from a vortex by a human boy at the cost of his own life. Chun is so moved by the boy’s kindness and courage that she decides to give him life again. But to do this, she must protect the boy’s soul, a tiny fish, and nurture it to grow. Through adventure and sacrifice, love grows, yet now she must release him back to the sea, back to life in the human world.

Big Fish & Begonia is currently scheduled to be released in 25 cinemas nationwide, with the locations as follows:

Speaking to Anime UK News, Manga Entertainment confirmed that the majority of the screenings will feature the English language dub.

China’s foremost animated feature film, Big Fish & Begonia has already made a name for itself overseas, with enthusiasts and critics alike hailing it as the forefront of China’s growing animation industry. Andrew Hewson, Manga Entertainment’s Marketing Manager, had this to share about the news:

“We are incredibly proud to be bringing this beautiful epic to the big screen in the UK and Ireland. Big Fish & Begonia is a gorgeous fantasy adventure that will transport you right back to when you first watched a Studio Ghibli or Disney film – it is that distinctive and powerful! This is a must-see for all animation fans!”

Will you be seeing Big Fish & Begonia? 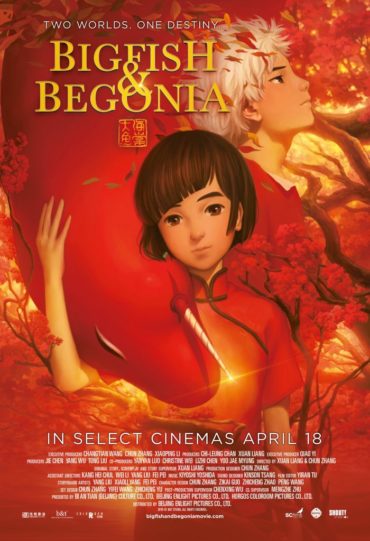