Following the broadcast of Love Live! Sunshine!!‘s second season finale earlier today, the school idols of Aqours were announced to be preparing a performance on their biggest stage yet – a Love Live! Sunshine!! movie has been officially green-lit! Details are still scarce at this stage, but keep your eyes on Anime UK News in the coming months for updates as and when they come!

This marks the second theatrical feature for the Love Live! multimedia franchise, following 2015’s Love Live! The School Idol Movie. The final chapter in the story of school idol group μ’s, the film was screened at London’s MCM Loves Anime event in 2015, but has yet to be released on home video in the UK.

Crunchyroll describes the story of Love Live! Sunshine!! as follows:

Uranohoshi Girls’ High School, a private school in the seaside neighbourhood of Uchiura at Numazu city, Shizuoka prefecture. A small high school in a corner of Suruga Bay, it is home to nine teens, led by second-year student Chika Takami, driven by one seriously big dream: To become the next generation of bright, sparkling “school idols”! As long as we don’t give up, any dream can come true… All we have to do now is keep pushing hard for glory! Now their “School Idol Project” begins to make their dreams come true! 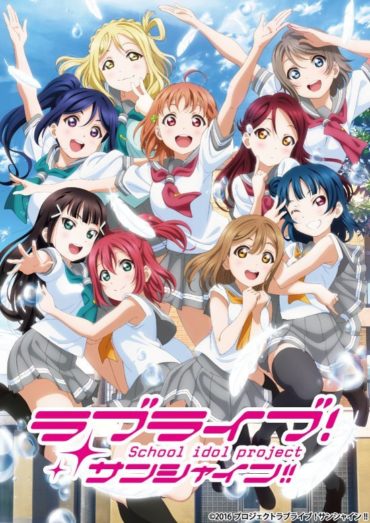 2015 – What Next? Hopes and fears as some of the writers at Anime UK News take stock and look to the future of anime (and manga) in the UK… HdE says: 2014 was certainly an interesting year in anime from a consumer’s perspective. Looking ahead, there’s a lot I’d like to see happen during … Continued