“In the city there’s a thousand faces, all shining bright. And those golden faces are under twenty-five.” – The Jam

The Anime News Network describes CITY as a slice-of-life comedy, but anyone familiar with Keiichi Arawi’s previous work like nichijou will know how surreal his work really is.

It certainly starts off like this. The opening segment (in colour!) tells the story of a bird that flew into a large rock and got turned into stone, that this stone bird served different functions throughout the ages, and that this bird has nothing at all to do with the story in question.

The story is actually about the residents of an unnamed city – or if it does have a name, it is just “City” (it is always referred to with a capital “C”). The first resident we meet is a 20-year-old student named Midori Nagumo, who is in debt to her elderly-yet-incredibly-strong landlady to the tune of 90,000 yen. This is mainly because whenever she begs her best friend and fellow student Ayumu Niikuru (a keen photographer who goes under the pen-name “Michael J. Niikuru”) Midori normally just gambles it away on the horses.

As a result, Midori chases after Niikuru while also being chased by her landlady. Thus we meet some of the other residents of the City: the new police officer who has just replaced the recently retired favourite two days ago; Wako Izumi, a woman who as a child was perfectly normal, but now relaxes by touching the gills of shiitake mushrooms and worships a god she made yesterday; the family who run the Makabe Western Cuisine restaurant; and the mysterious Dr. Adatara, who seems to rule the entire city and monitors everything using hidden cameras.

Midori tries to make some money by stealing a statue outside the Makabe restaurant, but after taking it to Toudou, the owner of a very successful antiques shop, she learns just how expensive it is and decides to return it, only to break it in front of Tatewaku Makabe, the son of the restaurant’s owner. Midori instantly promises that she will do anything to pay for the damage and Tatewaku just as instantly takes up the offer, so she becomes the restaurant’s new part-timer. However, she is not going to get much money out of it, as Tatewaku’s grandmother just happens to be Midori’s landlady, and the money she earns is thus instantly being used to clear her debt.

Anyone familiar with Arawi’s somewhat surreal antics will feel right at home with CITY. Indeed, Wako Izumi even appears in the nichijou anime. There are plenty of bizarre scenes to entertain. For example, Tatewaku takes his horoscope so seriously that when he is told that his lucky item that day is a miniskirt, he has to carry one with him, only for his father to tell him that for it to work, he must wear it, so for a whole day he has to wear the miniskirt in order for his luck to happen. In another, the officer is thought to have committed a burglary and is tied up by the locals, only for it to be discovered that all the stuff “stolen” was Midori’s, and it was taken away by her landlady in lieu of rent. Obviously, this kind of surreal humour is not for everyone, but if you like nichijou you should feel comfortable here.

You should also be familiar with Arawi’s wonderful art style, and with the translation, which is still using  Jenny McKeon, the original nichijou translator in this work. There are some bits of the translation that have been made to simplify things for English readers though. For example, the police officer is never properly named in the manga, so in the Japanese version he is called “Honkan”,  meaning “Officer”; while in English, he is just “Officer” or sometimes “Mr. Officer”. There is also a difference in presentation between the two books in that CITY is printed in a slightly larger format. 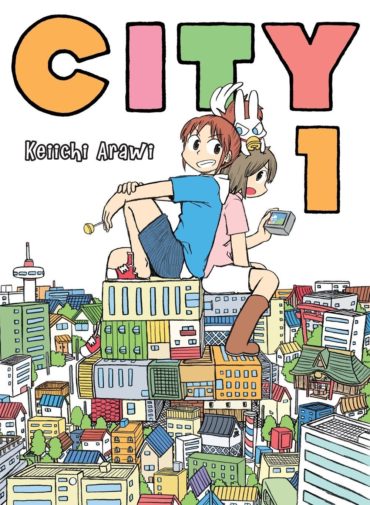