“Love is the gross exaggeration of the difference between one person and everybody else.” – George Bernard Shaw

This manga from 2009 by Yuri!!! On Ice creator Mitsurou Kubo may have been short-lived (only four volumes long, and is released in English in two 2-in-1 editions, the other being released in July), but it still has a charm of its own and has some details that are arguably relatable to her most famous creation.

The story follows Yukiyo Fujimoto, an unsuccessful man living in Tokyo, who is approaching 30. He has been relatively unlucky when it comes to love, but then all of a sudden he is contacted by a woman from his past… and then another woman… and then another. He is inundated with messages from various women he has previously known and failed to form proper relationships with. He believes that this is his season of popularity – his “moteki”.

Thus he begins to slowly make contact once again with the women from his past. First is Aki Doi, a woman who worked at a company Yukiyo once temped at and later went to a concert with, only to run away when he discovered she had a boyfriend, with whom she has since broken up. Second is lighting assistant Itsuka Nakashiba, a woman who is still a virgin and mistakenly thinks Yukiyo is also still a virgin. Yukiyo actually lost his virginity to the sister of his third contact, Natsuki Komiyama, a woman he nearly once ran over on his bicycle but later became close to. However, they never made love, even when visiting a love hotel. Lastly there is Naoko Hayashida, a former delinquent at his old school who later got married, had a daughter named Yuma, and then divorced. The manga sees him trying to re-establish these relationships separately, and seeing if any of them may result in happiness for him.

The main element of interest in Moteki is that although this is a harem manga, what with it focusing on one male character and at least four female love interests, it doesn’t feel like a conventional harem series. This is mainly because for most of the book all the relationships are kept secret. Neither Aki, Itsuka, Natsuki or Naoko are aware of each other or their past relationships with Yukiyo. Thus there has been little in the way of rivalry between the four women. It is not until the very end of this book, marking the half-way point in the series, that one of the women comes across one of the others.

Yukiyo is also an interesting character in some respects. With his insecurities about himself which range from how to talk to women to his own health – he used to be quite fat but then lost a lot of weight through exercise – you could arguably see some connections with Kubo’s most famous character, Yuri Katsuki, who also has his own anxiety issues.

There are some minor issues with the manga, namely that it has aged in some places. Back in 2009, MySpace was still popular and is thus referenced early on in the book. Other than this though, there is nothing that is terribly wrong with the writing. There are no translation notes in the back of the book, instead the translation (provided by Ko Ransom) of certain Japanese cultural points is provided in small text in between panels. It can be difficult to read, but it is there. On the plus side the manga also comes with some glossy colour pages.

Moteki is a nice fun read, and it will be interesting to see how the story will finally conclude. 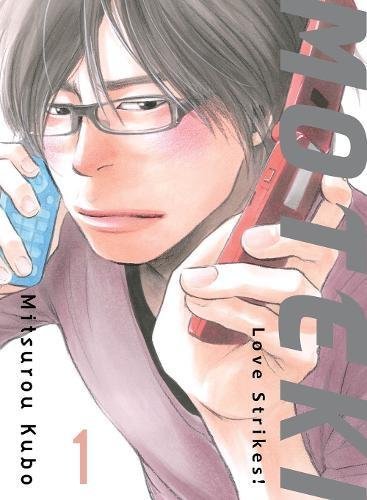