Big Fish & Begonia is the perfect example of the phrase “labour of love”, as creators Liang Xuan and Zhang Chun first created a flash animation that would become the basis for the film in 2004. The short flash film was well received, so Xuan and Chun decided to turn it into a big feature film, with the only snag being a practically non-existent Chinese animation scene and no money. The script was finished in 2009, but it wouldn’t be until 2013 when enough money was raised to make it, eventually getting released in 2016, twelve years after they decided to make it.

So what’s it all about? That’s a hard question, as it’s a very intentionally odd and dreamlike film. Chun is our lead character and is a female member of the Others, a race of people who live in a parallel world connected to ours deep underneath the ocean. The Others control the flow of nature in our world, for example making the wind blow or the seas move, or in the case of Chun, make the plants grow. Chun’s Grandfather, and the man who seems to be in charge of the other… Others, sends his granddaughter to Earth in the form of a red dolphin as part of a coming-of-age ceremony, and soon Chun falls in love with a young Earth boy who sadly ends up drowning while trying to save her from being caught in a net.

Chun, along with the child’s ocarina, returns to her home world and makes a bargain with “the Soul Keeper” to bring the human boy back to life in exchange for half her life span. Chun is given the boy’s soul (which takes the form of a small red dolphin) and is told to look after it until it reaches adulthood, and only then can it be returned to the human world, and thus starts the core story of Chun and her friend Qiu looking after this dolphin child… thing, and having to meet and stop various denizens of the Other land from killing it (humans are forbidden in their world, even in the form of floaty red dolphins, seemingly).

Much like in the Shrek films (which is a rather unfitting analogy in many ways, but bear with me) where you have the cast being based off of old English nursery rhymes and fables, a lot of the characters and plot in this film are based on Chinese folklore, which given I have no knowledge of this country’s fables means this already pretty out-there film just keeps getting weirder and weirder without the context of “oh I get it, it’s a version of classic myth” to break it up. I did enjoy reading about the myths after the fact, but that doesn’t change the film coming off as even more surreal than it was originally intended.

Overall the plot of the film is a heart-warming tale about love, the joys of childhood and of life and death. It may get really weird, but the message is still clear. It’s being compared to Studio Ghibli classics like Spirited Away and Princess Mononoke, which is always unfair to any project, but while I don’t think it reaches those heights of emotional and touching family drama, it does at least have its heart in the right place, even if the path to telling the story gets a bit muddled.

The main draw of the film is undoubtedly the animation, and it’s often stunning. A great blend of 2D and 3D animation that bombards you with colourful imagery and crazy set pieces. It’s one of those releases I properly recommend getting the Blu-ray version so the colours can pop as much as originally intended. The score, by Kiyoshi Yoshida of “The Girl Who Leap Through Time” fame, is suitably epic, sad and/or subtle when needed, and the English dub isn’t too bad. FUNimation handled the dub, so if you’ve ever heard any of their efforts involving kids and teens you’ll know the kind often heavy-American-accented dubs they provide, and of course the original Mandarin version with English subtitles is also available on the disc.

In terms of extras you can find a 15-minue Making Of documentary, breaking down the long journey the film creators went on to get this film made, along with trailers.

So to sum up, Big Fish & Begonia is a visual treat that has some heart and childish imagination behind it. It may not be the most cohesive film you’ll ever watch, you’ll sometimes feel lost in the relentless surreal imagery and nods to folklore you (most likely) won’t understand, but I can guarantee you’ll still sit in awe of the screen for the near hour-and-a-half runtime. 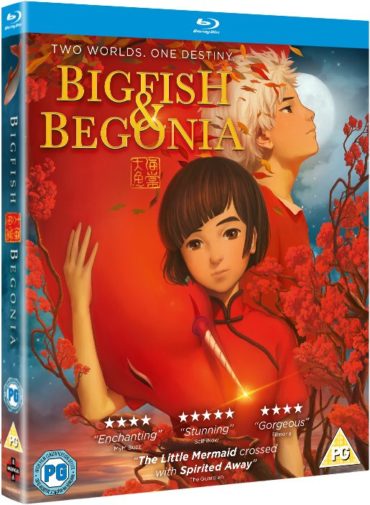