‘An original novel, with all-new characters and a new story set in the world of Attack on Titan! Fans of the series and readers alike will enjoy this immersive and engaging experience of the pop culture phenomenon and manga mega-hit.’

First of all, we’d like to thank you for agreeing to answer some questions about your new novel Garrison Girl and what inspired you to set the story in the world of Attack on Titan.

It was less of an inspiration and more of a dream come true. I’ve been an anime and manga fan since I was in middle school. My first series, The Legend of Eli Monpress, actually started as an experiment to see if I could apply the fighting anime formula to western fantasy. So when my agent heard Quirk/Kodansha was looking for someone to write an original novel set in the Attack On Titan world, I was ALL OVER IT. I dropped everything and wrote a synopsis for the plot that became Garrison Girl in three days. The rest is history!

Attack on Titan by Hajime Isayama has been one of the most successful Japanese manga and anime series for quite a while. How did you first come across it and what was its particular appeal to you?

It’s hard to be an anime fan without encountering AoT. It’s everywhere! That said, I’m not usually a fan of the really bloody stuff (I was scarred by Berserk), but my husband was like “you have to watch this, it’s amazing.” I’m so happy I listened! I was hooked on one episode. It’s just such a unique and imaginative setting with so many secrets. You can’t help getting addicted.

What interested me the most was the world. I found the idea of the last of humanity cowering in a walled city from giant monsters fascinating, and the secrets only made me more obsessive. How did humanity end up in this situation? How were the walls built? Where do titans come from? I had to know!

Alas, they didn’t tell me any of the secrets after I took the contract. I have to learn things as they come up just like everyone else T__T

The series has inspired many spin-offs, from video games and live action films to Japanese light novels. However, are we (at Anime UK News) correct in thinking that Garrison Girl is the first novel set in the world of Attack on Titan to be written in English? What inspired you to write the tale of Rosalie Dumarque?

So far as we know, Garrison Girl is the first officially licenced English-first novel for a manga franchise ever. As someone who cut her writing teeth on fanfiction, I’m SUPER STOKED about this. Yay for making history!

As for Rosalie specifically, I’ve always been obsessed with the nobility in the AoT world. In the show, they’re absolutely horrible, but surely not everyone inside Wall Sina is a selfish, horrible person. This is a society without mass media, newspapers, or radio. It’s totally possible there are very good people inside Sina who have no idea what’s going on outside. People who’ve been lied to and kept ignorant by those in power to protect them, but they’re not protect. Everyone is trapped inside the same walls, and if they don’t fight back and work together, those walls will become their grave.

This was the idea that formed Rosalie. I didn’t get a chance to explore everything I wanted to (it’s only one book), but I’m very happy with how her story turned out. Taking this well meaning but very privileged rich girl and throwing her into the meat grinder of the Trost Garrison was a lot of fun. (Sadistic author laugh.)

Even though we’re aware of stories for younger readers set in the world of Naruto being commercially published in the US, Garrison Girl seems to be the first full-length novel based on a Japanese manga/anime to be commercially published in the West. How did you go about pitching the project to the publishers? Or did they come to you with the idea?

I was one of several authors Quirk (the American publisher who works with Kodansha) approached, but once I heard about the project, getting it became an obsession. Some authors would sell their soul to write Star Wars novels, but I’ve always been an anime nerd. This was my dream project, and I went after it hard. Thankfully, I got the contract! I would have cried if I hadn’t.

Your background as a novelist is that of a prolific and successful SFF writer – and from your website, we’ve learned that your latest trilogy is Forever Fantasy Online, written with your husband Travis Bach. The first volume is described as ‘A thrilling new novel for fans of Sword Art Online and World of Warcraft!’ What inspired you both to explore the genre that people are calling LitRPG?

It was pretty simple! We watched Sword Art Online and Log Horizon and we immediately were like “We have to do this for Warcraft!”

Trav and I have been MMO nerds forever. We’ve played Rift, PlanetSide, the old Star Wars Galaxies MMO, but World of Warcraft was our addiction. Raiding was basically our second job for years. So when we got the idea to combine MMOs and writing (our other great obsession), it was a natural fit. We couldn’t not write it.

And for the record, I love FFO to pieces. We got to put all of our favorite raiding jokes and characters based on actual people we raided with. It was more fun to write than anything has a right to be. If readers have half as much fun reading it as we had writing it (and from the reviews, it seem like they do!) then my work is done.

Will there be more novels set in the world of Attack on Titan?

We’re starting with just this one for now to see how it goes, but I’ve got a whole bucket of titan-sized ideas if readers wants more. 😉

You must have some other favourite manga and anime that you’d like to recommend to our readers. What other series have you enjoyed – and what’s made them stand out? Is there anything new you’re following at the moment?

OMG where do I start? It is an absolutely amazing time to be into anime. Other than Attack on Titan, my current favorites are My Hero Academia, One Punch Man, Food Wars/Shokugeki, and Blood Blockade Battlefront (which has no real plot that I can tell, but is so incredibly imaginative I don’t care). For finished series, I loved Avatar the Last Airbender (not technically anime, but too good not to include), Madoka Magica, Recovery of an MMO Junkie, Kabaneri of the Iron Fortress, and Restaurant to Another World. And of course we’re still watching One Piece, because after 10 years it’s pretty much a religion.

And here are three text-centred questions from our reviewer Demelza:

1: I’d like to know what attracted the author to doing a story based on the garrison squad, instead of say the Survey Corps or even the Military Police? It’s certainly not the first thing that comes to mind if I was going to write a story in that world!

I’ve always had an obsession with the normal people of fantastical worlds, folks for whom magic/titans/etc is just another Tuesday.  I was particularly interested in the Garrison because they’re the front line. The Military Police cower inside the walls and oppress the populace, the Survey Corps bravely rides out to find answers, but the Garrison are the ones who are actually on the walls doing the world of keeping people alive for another day. I found that fascinating, so when I needed somewhere for Rosalie to learn the harsh reality of titans, it was the natural fit.

2: I noticed Pixis pops up for a bit, so I was wondering how much freedom Rachel Aaron had when depicting established characters. Was it something that the original mangaka had a lot of say into or could she depict them however she felt best? Which I guess leads into my final question…

I really wanted to bring in cannon characters! Part of this was because I wanted the story to feel like a real, seamless part of the AoT world, but mostly I’m just a giant nerd who jumped at the chance to write cannon characters I like!

And yes, Kodansha was very involved with the process. For example, I actually put Erwin in the original manuscript because he’s my FAVORITE. (I’m a sucker for a brilliant commander). But I had to cut him because Kodansha (quite correctly) pointed out that, according to the manga, there was no way he could be in the place I had him at the time he was there.

So yes, this book has been seriously vetted! Isayama himself read a translated version of the manuscript and requested minor changes. Changes I happily made, because my number one goal in writing this book (aside from telling a good story) was to deliver a reading experience that felt like Attack on Titan. I wanted to capture the same visceral terror and gritty desperation that got me addicted to the show in the first place. I think I achieved it, but I hope you’ll all read it and tell me how I did!

3: Was there anything Rachel Aaron wanted to write about for this book that she wasn’t allowed to because of Attack on Titan being an established IP, or was she allowed to explore anything she wanted to in this world?

As I said earlier, I REALLY wanted to put Erwin in (because favourite) but couldn’t because of the timeline. Other than that, though, I got to do everything I wanted. Kodansha gave me enormous freedom within the IP, and I really appreciated it. It was basically the ultimate fanfiction dream, and I loved every second of it.

Thank you so much for giving us this interview opportunity!

Thank you so much for having me!!

Demelza’s review for Anime UK News can be found here; Garrison Girl is published by Quirk books who supplied us with an ARC. 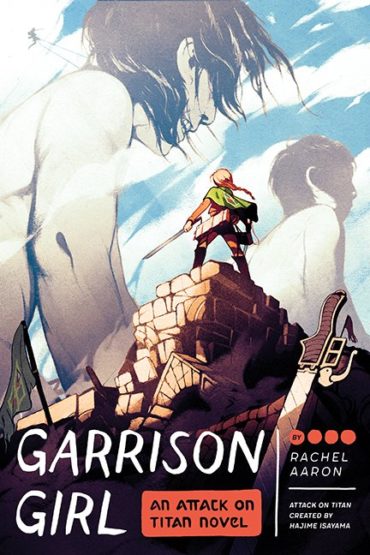 Attack On Titan YA Novel Out in August 2018

Garrison Girl – a YA novel set in the world of Attack on Titan – has been announced at C2E2.