If you read a lot of sci-fi manga then you may be familiar with the name Tsutomu Nihei, the creator of Blame! and Knights of Sidonia. Today I’m here to review the first volume of the mangaka’s latest work, APOSIMZ, to see if it lives up to the high quality of his previous works.

Now, the thing about this series is that mangaka Nihei doesn’t really give many details about the world at all within this first volume. Most of what I know I learnt from scanning through various Wiki pages and reading further into the series on Crunchyroll’s manga service. Nevertheless, here is what I’ve figured out for Volume 1:

APOSIMZ follows the story of Etherow and his friends Biko and Eo, who live on an artificial planet known as Aposimz. The planet appears to have two groups of humans living on it who are at war with one another. One of these groups, the Rebedoan Empire, live in the safety of the ‘core’ of the planet, while everyone else lives on the surface of the planet in harsh conditions with little food. Surface dwellers slowly succumb to “Frame Disease”, a disease which gradually transforms people into biomechanical creatures.

One day, while Etherow and his friends are doing some combat training, they’re interrupted by a strange girl who is being chased by Rebedoan Empire soldiers. The girl asks for the group’s help in keeping safe a “code” and seven mysterious bullets. Etherow’s group agrees to assist her and take down the girl’s pursuers, but in doing so they reveal the existence of their camp. Now faced with danger as never before, Etherow will be forced to make some difficult choices. Just what is this code they’ve been entrusted to protect, and what does it mean for the future of this planet?

As someone who’s never read any of Nihei’s other series before, I was worried at first that maybe this series was connected to one of his others, which would have explained the lack of worldbuilding in Volume 1. For example, at Scotland Loves Anime last month I got the chance to watch the film adaptation of Blame!, and the world in APOSIMZ really reminded me of Blame!’s setting. However, after a lot of research and asking around, I’m certain that APOSIMZ isn’t related to any of Nihei’s other works, which leads me back to my original confusion regarding the setting and plot.

I’m certainly not against being drip-fed information. After all, I read light novels where authors like to dump completely meaningless information on you at every turn (I’m looking at you, In Another World With My Smartphone!), and I know of plenty of manga that do that too, so it’s refreshing not to have that problem. The issue with APOSIMZ is that it starves the reader of information to the point where I still have no real idea what’s going on. I do have faith that all will be answered at some stage, judging by the tiny amount of information we do learn, but this is going to take more investment than I think most readers are willing to give.

Personally, I came away from this volume intrigued enough to read more of it but, had it not been readily available on Crunchyroll, this could have also very easily been the end of the road for me. With so little information about the setting I couldn’t get invested in the world, and Etherow as a character is very two dimensional with little to his personality and easily forgettable (which certainly doesn’t help in an already barren world). I do think if you’re an existing fan of Nihei’s work then perhaps it’s easier to stick out the first volume – maybe all of his works start like this? I don’t know – so what’s a bad first impression for me might not be for others.

Having said all of that though, APOSIMZ is certainly not all bad. The one saving grace of the manga is the fact that Tsutomu Nihei’s art is truly excellent in places and he has an incredible style. Many of his backgrounds are drawn expertly down to the smallest detail and look breathtaking, which captures your imagination and leaves you fascinated. However, not all of the panels are like this. A lot of his other shots tend to be rough outlines of buildings and people, which leads you to finish the image in your head. Nihei also tends to gray out large portions of his artwork as a means to display environments and people cast in shadow, but it results in him leaving out a lot of detail within these scenes.

It’s difficult for me to make my mind up about this art style. On the one hand, it takes incredible talent to pull it off (and I think the mangaka does manage it), but on the other hand it does sometimes come off as a bit lazy when he has such beautifully drawn images next to what can only be referred to as barren – much like his story. I think overall I like it, but I wouldn’t be surprised if it divided other readers.

This release comes to the UK thanks to Vertical Comics and has been translated by Kumar Sivasubramanian. The translation reads well and the book also includes a couple of colour pages at the beginning, which is a nice extra. Unfortunately these pictures are coloured in a range of black, gray and cream, so they’re not as colourful as I’d have hoped, but they do look interesting for what they are. As previously mentioned, the manga is also available on Crunchyroll manga, so if you want to try out the series or read ahead of the volume releases that’s the place to do it!

Overall I came away from APOSIMZ confused. I’m not sure who Tsutomu Nihei is creating this story for because newcomers to his work are likely to be completely lost, but the series also doesn’t seem to harbour any connections to his previous manga. If you’re willing to stick with it then I think there will be some pay-off in the end, but unfortunately I think most readers are going to bounce off it the same way I have. 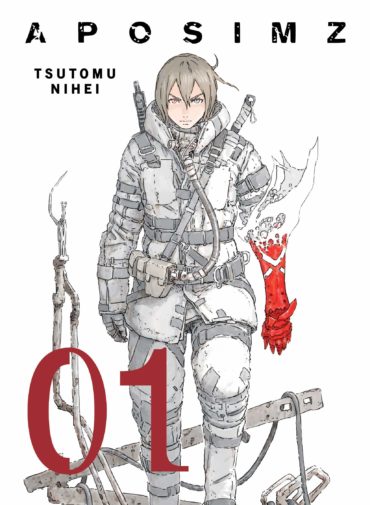 It may not be a perfect adaption of the manga source material, but it is certainly a good first step into this grim future world.