The critically acclaimed mecha series has now been released in this special edition, in a much larger size and with colour pages to boot.

The story takes place on the Sidonia, a large spaceship and the only one known still surviving that contains what is left of humanity, as the ship is not in contact with any other humans. It was one of several ships that left Earth after the entire solar system was destroyed by the Gauna, a race of gigantic shape-shifting aliens. During the past millennium that the crew of the Sidonia have survived, people have developed genetic engineering technology to allow cloning, asexual reproduction among intersex inhabitants, and the ability to photosynthesise and thus live just by consuming light.

The main defence of the Sidonia are mecha called “Gardes”. The series follows one of the pilots of these mecha: Nagate Tanikaze. He has spent his time living in a hidden corner of the ship with his grandfather, working on a Garde simulator and training himself to perfection. When his grandfather dies, he ventures deeper into the ship to find food and is apprehended stealing rice. He is later released, and after learning a bit more about how the ship works, Nagate is recruited into piloting an actual Garde. Despite being so junior, his years of training mean he is able to take on the Gauna himself and successfully fight against one, when before the Garde were purely defensive. Thus Nagate is able to start the fight back against the aliens.

Probably the main appeal of Knights of Sidonia is the setting. The ship is the last refuge of humanity, now that the Earth has been destroyed. Oddly it puts you in mind of The Hitchhiker’s Guide to the Galaxy, where the Earth is demolished very early on in the story, but with the bureaucratic Vogons replaced by a race whose reasons for destroying our planet currently remain unknown. The idea of the last people alive on a spaceship is also akin to that other British sci-fi comedy great, Red Dwarf, and the Sidonia itself has a similar, somewhat grotesque look to it (a solid octagonal prism with a large malformed blob of rock at one end). The only other spaceship mentioned so far is one called Aposimz, which lost contact with Sidonia over 700 years ago. Fans of Sidonia author Tsutomu Nihei’s work will recognise Aposimz as the title of his most recent work.

There are plenty of other interesting ideas played with in this title, namely around the subject of genetic engineering. There is the idea of humans being able to photosynthesise and thus avoid starvation by consuming light. This leads to two notable points in the manga. First is the one moment of fan service in the book where Nagate accidentally wanders into a female-only photosynthesis room and ends up the worst for it. The second is following a battle with a Gauna where he is stranded with another pilot, a woman named Shizuka Hoshijiro, after their Garde run out of energy. While Hoshijiro can photosynthesise and thus live without food, Nagate struggles to survive and needs extra help to keep living until they are rescued.

Other elements of this genetic storyline include the role of gender. Nagate’s best friend over the course of the story is Izana Shinatose. Izana says, “There are new genders now. I can reproduce with a man or a woman, and I can even give birth to my own clone.” In the original Japanese, Izana is referred to by gender-neutral pronouns, but in English Izana is given female pronouns.

Regarding the artwork, the fight scenes between the Gauna and Gardes are the most appealing. The conflict between the mecha and gigantic aliens leads to almighty sequences that are thrilling and entertaining. Plus, with the bonus colour pictures added to the story you get some extra drama and tension. There are other moments of action that also produce a thrill. These include a moment when the Sidonia needs to make a sudden change in direction to avoid a Gauna, causing a change in gravity that results in several people on the ship being dramatically and tragically crushed.

These sequences are certainly better than the character design, which is the biggest criticism of Sidonia. Many of the human characters look too similar to each other, and you have to examine the manga hard to find someone who stands out – e.g. an intelligent, walking and talking bear with an artificial hand. The characters often look so similar that you begin to wonder if the reason Nihei included clones in the story was so that he could just copy the same character design over and over again.

Turning to the production of this edition, the colour pages and enlarged size of the book are the only real extras. While it would have been nice to have the manga released in hardback as Vertical previously did with Mobile Suit Gundam: The Origin, it feels as if that might have pushed the cost of the books over the edge. The only translation notes are one or two added in the margins, and even then this is more for technical descriptions of certain aspects of the dialogue rather than for anything cultural (e.g. “ETL” meaning “Extra-Terrestrial Life”). Kumar Sivasubramanian is the translator, and in the series virtually all the written text visually depicted in panels is translated into English, and given how much there is, this is understandable. This first edition includes all of the first two volumes and the first chapter of the third. Given that there are 15 standard volumes in total, you can see why they are splitting the standard tankobon, because if you kept at two volumes per edition you would end up with one left over, while three volumes would probably be too big.

Knights of Sidonia is a series that has attracted acclaim from other people in the world of anime, and the story itself is certainly entertaining. This complete collection will be pretty expensive, but there is plenty going for it. 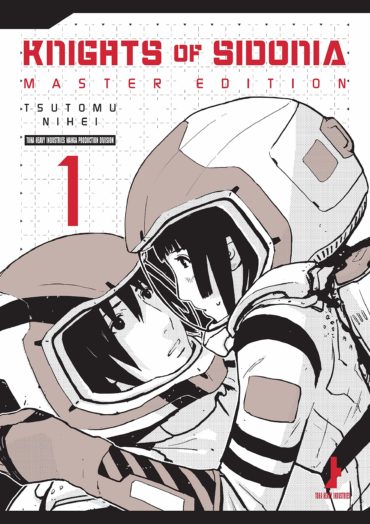