As far as high-school romantic comedies go, it’s not uncommon to have a setup where the protagonist is taught by a classmate, or teaches fellow students, and then eventually they fall in love. The latest series to be released in the West with this theme is Kodansha Comics’ The Quintessential Quintuplets, where our protagonist has not one but five students to tutor! Today I’m here check out the first volume to see if this manga offers anything new in a crowded genre.

Our story follows Futaro Uesugi, a high-school student with excellent grades but from a family with huge debts. On the day we meet Futaro, luck is clearly on his side as his little sister (Raiha Uesugi) calls, revealing that their father has found a great part-time job for Futaro. As it happens, a rich family has just moved to the area and is looking for a tutor to teach their daughter, a role that Futaro is perfect to fill. However, on this same day Futaro has a run-in with a girl during lunch that unfortunately ends in him insulting her. Shortly after he discovers that the girl, named Itsuki Nakano, is the girl he’s meant to be tutoring! Hoping to make amends before turning up as her tutor, Futaro does everything in his power to apologise to Itsuki – but whenever he sees her, she’s mysteriously surrounded by female friends…

In the end Futaro never gets to apologise to Itsuki, and worse, when he arrives at her home, he discovers that he’s been employed to tutor not only Nakano but her four sisters as well! As if things couldn’t get any worse, Futaro quickly learns that all but one of the sisters are uninterested in his help and flat-out refuse to let him teach them, despite their ridiculously low marks. Determined to gain the girls’ respect, Futaro must now learn more about each of them and appeal to their interests or kiss his new job goodbye.

The first thing that struck me while reading this story was how similar its setup is to Weekly Shonen Jump title We Never Learn, which, coincidentally, just had its first volume released in print last month from VIZ Media. That series follows Nariyuki Yuiga, who also happens to come from a poor family. In order to get the VIP recommendation from his school to the college he wishes to attend, he’s tasked with tutoring three of his fellow students who are all gifted in a single subject but hopeless in anything else.

Further into We Never Learn, the girls begin to develop romantic feelings towards Yuiga, something that The Quintessential Quintuplets also seems to have in mind for its cast. The beginning of the series actually takes place in the future, with Futaro preparing for his wedding day. Partway into the volume we’re shown that his future bride is one of the quintuplets, but given no inkling as to which one she is.

Comparing these two series, I’d say that We Never Learn focuses more on the comedy than the romance (reminiscent of Weekly Shonen Jump series Nisekoi), whereas The Quintessential Quintuplets obviously has romance at the forefront of its mind – even if there is a hefty dose of comedy in this first volume. Having said that, I came away from The Quintessential Quintuplets Volume 1 having enjoyed it but without the desire to read more. I am, however, a big fan of We Never Learn and have been following it since it debuted in the English Weekly Shonen Jump in early 2017, so maybe I just don’t currently have room in my heart for a very similar series. Regrettably, with these two series being released at the same time, I don’t think I can confidently tell readers to pick The Quintessential Quintuplets over We Never Learn unless they’re looking for romantic progression more than comedic value (because, quite honestly, We Never Learn is a lot more funny).

The other problem I have with The Quintessential Quintuplets is that there are just too many characters in this first volume. I know that’s what mangaka Negi Haruba was going for but, as a result, only Futaro and one or two of the siblings receive meaningful development while the rest are for the most part ignored. This will hopefully improve as the series continues, but right now it’s not a fantastic start for getting to know everyone.

Characters aside, I like the artwork that Haruba has delivered here. It’s very clean and easy to follow with just enough detail to tell the quintuplets apart despite the fact that they all look more or less the same (except for Miku, the sister who wears headphones around her neck all the time). Futaro’s design is oddly inconsistent to start with though, as earlier on he looks like he has sort of a mushroom cloud of hair but that later changes to be somewhat more attractive. Haruba also makes good use of backgrounds and double-page spread panels to convey important scenes to the viewer, so on the whole I came away satisfied with what I saw.

This release comes to the West thanks to publisher Kodansha Comics and has been translated by Steven LeCroy, whose translation reads well. The back of this volume also advertises that The Quintessential Quintuplets has been made into an anime, which at the time of writing is due to begin airing on the 10th of January and has been picked up for streaming by Crunchyroll. An English ‘simuldub’ will also be produced and streamed by FunimationNow starting on the 30th of January.

Overall, The Quintessential Quintuplets is an okay entry in the romcom genre. It’s perhaps outshone by VIZ Media’s recent debut of We Never Learn but, nevertheless, if you like this genre, I think The Quintessential Quintuplets is worth checking out at some point – even if it’s not right now. If nothing else, perhaps the anime adaption will be able to help you decide. 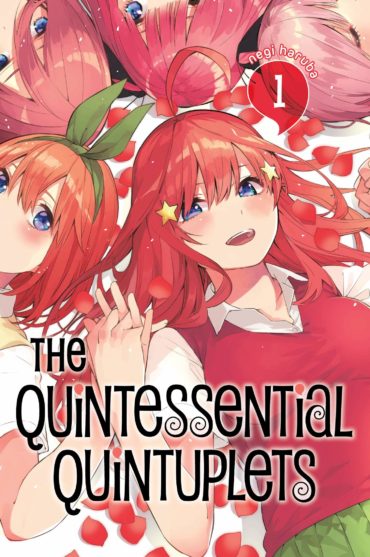 We Never Learn continues to be an entertaining romantic comedy. While this second volume is more episodic in nature compared to the previous one, this works in the series’ favour and offers a nice chance to spend time with all of the cast one-on-one.