When I attended Scotland Loves Anime last year, one of my favourite films was I Want to Eat Your Pancreas. The story has stuck with me ever since and I eagerly read the original novel when publisher Seven Seas brought it to English at the end of 2018. Now Seven Seas have also released the manga adaption of the series and I was keen to see if it could live up to the film and novel. Let’s find out!

The story follows a quiet high-school boy (who goes unnamed) who finds a diary belonging to his classmate Yamauchi Sakura. Titled “Living with Dying”, the diary reveals Sakura’s battle with a pancreatic disease. When Sakura discovers that the protagonist has found her book, she swears him to secrecy about her disease and although he has no interest in being her friend, Sakura finds herself curious about the boy and his life. Using their shared secret to her advantage, Sakura finds excuses to hang out with him (such as becoming a library assistant alongside him at school) and despite his protests, the boy can’t seem to refuse Sakura’s requests.

Having experienced this story so many times now through its various media, I firmly believe that the most impactful viewing is the one without knowledge of where the story is going. That’s a feeling I want to protect for others and so I won’t talk about the plot anymore, at least not in detail. I’d urge anyone with even a remote interest in the story just to go in blind. This story has a lot it wants to show you and so much of it is emotionally driven, so even if I described it you wouldn’t find it half as interesting as it actually is.

From my previous experience I can say that the film of I Want to Eat Your Pancreas is a heartwarming tale about a girl whose living out what’s left of her life to the fullest and the boy who spends his day absorbed in books instead of reality. It sets out to offer a bittersweet romance between two unlikely souls and fully delivers, although unfortunately this manga adaption doesn’t.

I Want to Eat Your Pancreas is a story told in the first person. For the novel (and movie) this is something that works well, but it hasn’t worked out quite as well in the manga. Quite a few of the protagonist’s inner monologues have been removed or condensed down and this proves to be a big shame. Not only does it prevent us getting a grasp on his development over the course of the story, it also brings into question why he’s so willing to go along with Sakura’s whims. Having read the novel, I already know what drives the main character and could piece it together again here, but for those who aren’t familiar with the story, he just seems bland and uncaring. This, unfortunately, brings me to another problem with the manga.

The artwork for this manga is poor for the story it needs to tell. The character designs aren’t bad, but they’re generic – and the mangaka, Idumi Kirihara, isn’t good at making the cast expressive either. The protagonist isn’t meant to be good at expressing his emotions, but in the original novel Sakura is described as a ray of light – always shining and bouncing with life,  despite her condition. That doesn’t come across in the manga at all and it’s a real disappointment for a story that hinges so much on emotion. The protagonist for his part is supposed to have moments where his feelings do come through and he’s meant to loosen up a bit as the plot develops, but this too is absent.

Overall I’m not sure I can say any of the artwork is anything remarkable. Panels are fairly empty and screentone is applied liberally in an effort to get around adding detail. Even when there is more going on in a panel, it’s usually just the bare minimum of detail and that makes the story difficult to get into. It’d be different if the cast were more expressive, but the fact they aren’t, combined with this issue, just makes the book dull.

The manga adaption of I Want to Eat Your Pancreas feels empty, void of almost everything that makes the story good. The only redeeming quality is that the dialogue still packs an emotional punch. Translated by Beni Axia Conrad, the text reads well and they’ve done a good job getting around the issue of the protagonist not being named and referred to as ‘something-kun’ for most of the story. Conrad has done a great job on this front.

This release comes to the West thanks to publisher Seven Seas Entertainment, and is a complete release of the manga. In Japan, the series was released in two volumes, so Seven Seas’ release is an omnibus. The collection opens with colour pages, which seems to include the image Japan used for Volume 2’s cover among them. Having the complete manga in one book is nice, but it does make this quite an expensive collection at £15 (if you go for a physical copy, that is, rather than the digital version).

At the end of this review, I find myself unable to recommend I Want to Eat Your Pancreas in its manga form. For a story I love so much as a film and as a novel, the manga just doesn’t carry the same weight and I’d recommend all the other media above it. With average artwork and lack of emotional depth, it’s hard for me to find anything redeeming here. Even for existing fans, it’s honestly a tough sell. 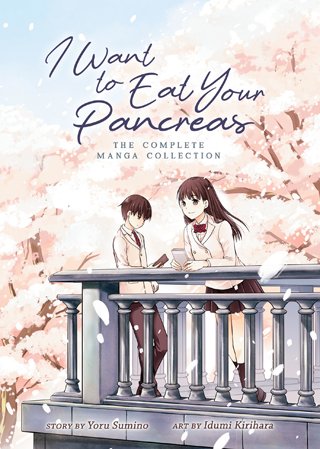 Title
I Want to Eat Your Pancreas: The Complete Manga Collection

Seven Seas announces plans to publish Japanese novel “I Want to Eat Your Pancreas” and its manga adaptation. Also, a new trailer for the Japanese anime feature film has been released!