Frequent readers of the site may remember that last year I reviewed Orange from mangaka Ichigo Takano. Orange is now a critically acclaimed series, so it will come as no surprise that publishers Seven Seas have recently licensed another of Takano’s works: Dreamin’ Sun. Today I’m here to review the first volume of this earlier work in the hopes that it can capture my heart as much as Orange did.

Dreamin’ Sun follows the story of high school student Shimana Kameko, who runs away from home and bumps into a mysterious stranger named Fujiwara Taiga. Fujiwara offers Shimana a place to stay, but only on three conditions. The first is that Shimana tells him why she ran away from home, the second is that she must help Fujiwara find his missing house key, and the third is that she must have a dream and fall in love with someone!

Shimana isn’t sure what to make of oddball Fujiwara – and things only get worse when she encounters Nakajou Zen and Tatsugae Asahi, who both attend her school and also stay with Fujiwara – but to find a place where she can truly belong she’s willing to follow his rules. She ran away from home due to feeling that she didn’t fit in with her family anymore. Shimana’s mother died when she was in seventh grade and since then her father has remarried and had a son with Shimana’s step-mother. Because this Shimana felt that she wasn’t loved and that the baby was all her stepmother and her father cared about. Whether that’s true or not, Shimana wants the chance for a fresh and safe start, which Fujiwara offers her – provided she can clear the conditions.

Dreamin’ Sun is actually one of Takano’s older series. Originally published in 2007 until 2011, the manga ran for 10 volumes. While that sounds like a lot, I think it’s probably about right for what the plot is doing. At heart Dreamin’ Sun is an interesting mix of a heartfelt shojo and a quirky comedy series. The characters have a great deal of personality and a further nine volumes should offer them ample time to develop, and it’s hopefully enough time for Shimana to find her place in the world. Fujiwara seems as though he has many secrets to reveal through the course of the story and although Nakajou and Tatsugae currently seem stamped as ‘idiot friend’ and ‘love interest’ respectively, I have faith that Takano has something interesting up her sleeve for them. I mean, why are these two living with Fujiwara in the first place?

My only complaint with this first volume are Takano’s designs for Shimana and Tatsugae. Shimana looks a lot like Naho in Orange, and love interest Tatsugae also heavily reminds me of Kakeru. This series was penned before Orange so this clearly wasn’t intentional (and if anything Orange just proves Takano really liked these designs), but considering the order of release, it’s difficult not to compare the designs for Dreamin’ Sun to Orange and be a little put off.

Away from character designs, the artwork is very nice throughout this volume. As it is a comedy there are a few panels filled just with comedic character shots, but wherever there are backgrounds they’re always very well drawn. The afterword at the back of the book implies that this is a new edition of Dreamin’ Sun and Takano redrew some of the panels. Presumably the series was re-released in Japan at some point but this is the first English release, so it doesn’t make a difference to us. The quality of the art is very high overall and I especially liked how much emotion Takano conveyed through the way she drew the eyes of our cast.

It’s hard to say if Dreamin’ Sun will be able to hold my attention for ten whole volumes. It’s off to a fantastic start with a fun cast of characters and an interesting story, but I’m not sure it grips me in quite the same way Orange did. If you like Shojo manga then I definitely think it’s worth giving a go, but if you’re not a fan of the genre then maybe take a ‘wait and see’ approach. I can at least say that I’m looking forward to Volume 2 and I’m glad Seven Seas decided to bring over more of this mangaka’s work. 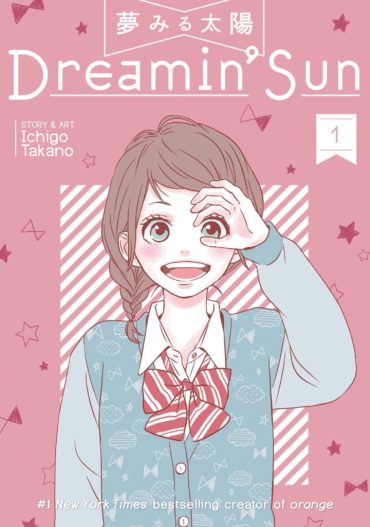