While the game has been on general release since Friday 15th February, people were able to play on Tuesday 12th by paying more for it (£89.99 in comparison to £44.99). Those who made the choice not to purchase in advance are probably feeling smug at the moment, pointing out various issues the game has had.

In Jump Force, our world collides with many parallel worlds that are home to characters from various Shonen Jump series. Humanity is attacked by a race of mind-controlling villains called ‘Venoms’, some of whom have allied themselves to Jump villains, while some control heroes from the stories. You play a human who at first falls victim to a Venom attack lead by Dragon Ball villain Frieza, before being revived by Dragon Ball hero Trunks using a device called an ‘Umbras Cube’. This character is your custom-made avatar, and the Cube gives you the same powers as the Jump heroes. 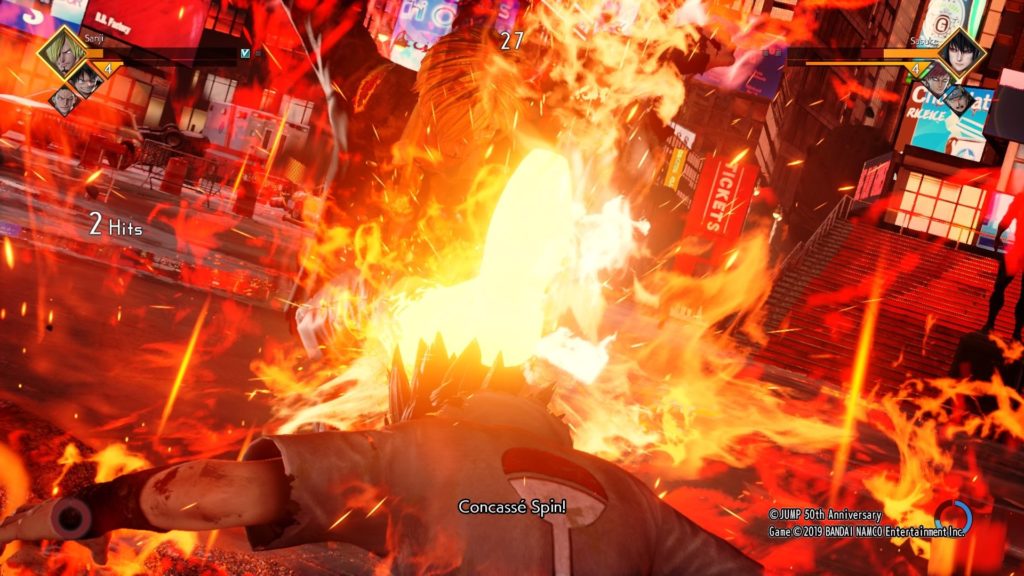 You are then recruited into a unit tasked with getting rid of the Venoms and restoring order; the so-called ‘Jump Force’ from the game’s title. The organisation is split into three main units: Team Alpha, a force that fights off Venoms lead by Dragon Ball’s Son Goku; Team Beta, a unit reclaiming territory from the Venoms headed by One Piece’s Monkey D. Luffy; and Team Gamma, a reconnaissance unit organised by Naruto‘s Naruto Uzumaki. Along the way you will also encounter characters from other series, such as Hunter x Hunter, JoJo’s Bizarre Adventure and Bleach, but some members of the Jump Force appear to have alternative motives, including one non-playable character: Light Yagami, who appears to be searching for his ‘Death Note’.

Gameplay normally involves battles in teams of up to three characters who can also jump into the fight, or you can swap with the others mid-fight to try and gain an advantage. As well as the normal punches and kicks, you can equip your avatar with various abilities used by Jump characters, the strongest being your ‘Awakening’ move that you can trigger under certain conditions, such as when you take a certain amount of damage. You can mix and match abilities belonging to characters from different comics. You might equip yourself with Goku’s ‘Kamehameha’, Naruto’s ‘Rasengan’ and Luffy’s ‘Fourth Gear’. 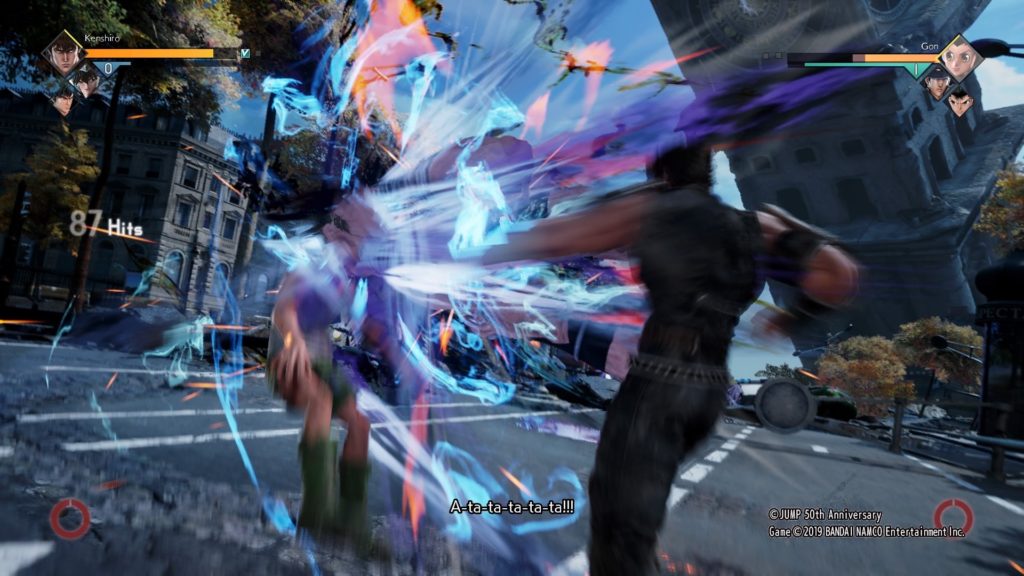 The actual combat gameplay is good. It is really enjoyable and easy to pick up; you can quickly lose yourself in the fighting. Whether you are someone who learns all the combos or someone who just pounds away at the buttons (I tend to fall into the latter category), the fights are still fun.

This might be why I was one of those people considered gullible enough to have picked up the pre-order edition that people have been mocking online. When I first encountered the game, I played a demo version at Hyper Japan in July 2017. Only the fighting gameplay was available, which is the best bit of the game. I thus ordered the beta test version when it came out, but the beta version was unavailable on the PS4 for most of the time. I only got to play it once, and it ended before I finished my first fight. This was probably a sign of the issues to come.

If you look Jump Force up online, especially on social media platforms like Twitter, you will see people mocking some of the dodgy animation in the cut scenes, where characters are moving oddly. In the game itself, I came across sequences with Light Yagami when he is accompanied by Ryuk, in which Ryuk has dialogue as is indicated by the subtitles, yet you don’t hear him speak the words. Speaking of subtitles, you can only play the game with the original Japanese audio and English subtitles. No English dub is available. Another issue I spotted was the game suddenly stopping and shutting down at one point just after a cut scene end and a fight was about to start. 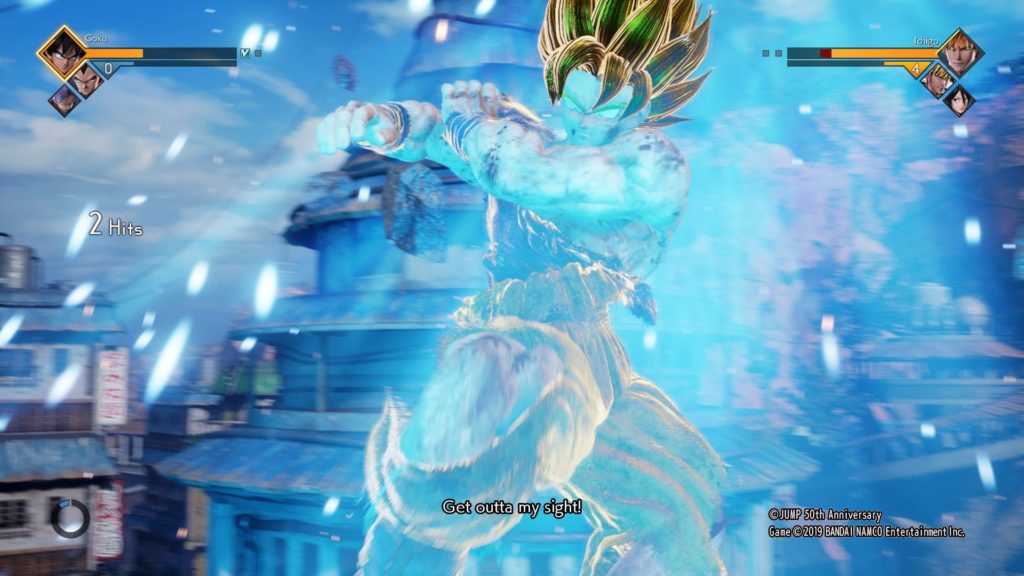 There is also a strange meme going around concerning one character: Izuku ‘Deku’ Midoriya from My Hero Academia. If you play with him as the opening character in your team, and are battling a team whose opening member is Dragon Ball’s Piccolo, Deku says before the fight: “A Villain…! I have to protect everyone…!”, to which Piccolo replies: “I’m no villain! I’m a Namekian!” This has lead to a meme on Twitter jokingly suggesting that Deku is being racist. I’ve even seen some rather good drawings depicting him as a Donald Trump figure, wearing a ‘Make Jump Force Great Again’ cap and suggesting that they should build a wall around Planet Namek. These are all jokes about unfortunate dialogue, of course, but some people are taking the remarks a bit too seriously.

However, there are other issues with the game, such as the choice of characters in general. In the entire game, there are only four playable characters that are women (except the avatar, if you choose a female version). These characters are One Piece‘s Boa Hancock, Naruto‘s Kaguya Otsutsuki, Bleach‘s Rukia Kuchiki, and one villain who is an original character made for the game. It would have been better to have had more women in the game. For example, as they already have Naruto, Sasuke Uchiha and Kakashi Hatake, you would think that they would have also picked Sakura; then you would have had the whole of Naruto‘s Team 7. The only other characters picked from that series were Gaara and Boruto. Boruto also has his own problems – namely, the game’s version of Naruto is his teenage self from the second half of the Naruto series. Logically, we should be playing the older version of him and the other Naruto characters to make it accurate.

Other issues concerning character selection refer back to the reason the game was released: to mark the 50th anniversary of Shonen Jump. Given that, you would think some characters would be included from older series, but there are no characters at all from series dating back to either the 1960s or 1970s. It only goes back to the 1980s, and all of the characters come from action/fighting titles. If you are a fan of Jump’s sports series like Kuroko’s Basketball, or harem shows like Nisekoi, you will have to look elsewhere. Aside from the series I’ve already mentioned, other manga featured include Black Clover, City Hunter, Dragon Quest, Fist of the North Star, Saint Seiya, Yu-Gi-Oh! and Yu Yu Hakusho. 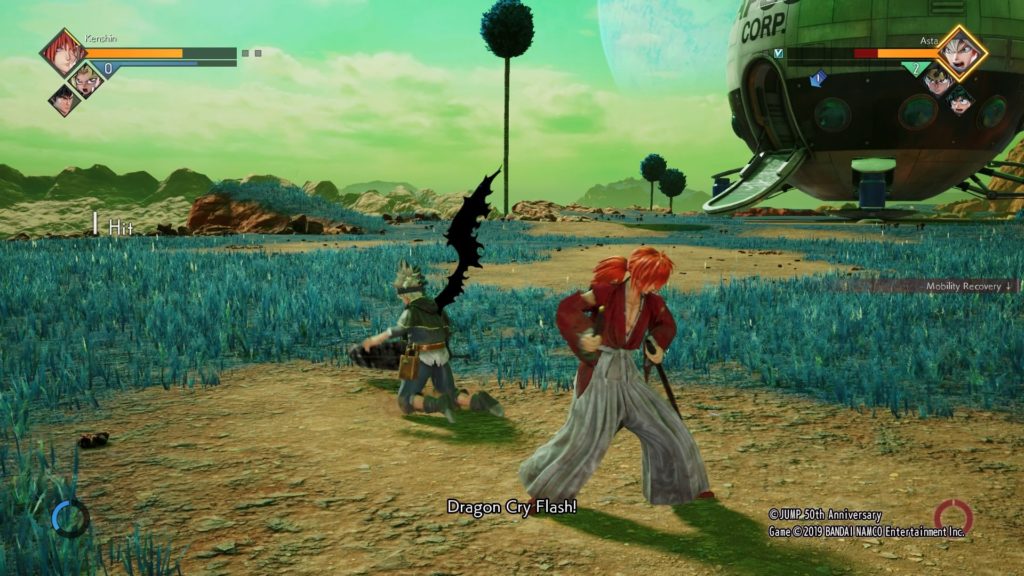 There is one other series that has contributed to objections to the game: Rurouni Kenshin. While much as been made about the quality of Jump Force, there has been little mention of the choice to include characters from a series made by a man who was fined for possession of indecent images of children. It’s like putting together a compilation album of glam rock songs and adding a track by Gary Glitter. No matter how good the rest of the album is, that track would still present a bit of a moral issue.

All of this is infuriating because the actual gameplay is perfectly good. However, everything else hampers the enjoyment, whether it is the dodgy animation and dialogue, the lack of women, the limited range of genres covered, or the scandals involving some of the creators. The game is playable, but it is certainly a case of ‘good, not great’ at best. It is probably more accurate to say ‘OK, not good’. In terms of the comments regarding the foolishness of those who purchased the more expensive pre-order edition, I regret to say they are probably right – and I include myself in the group of people who did pre-order. 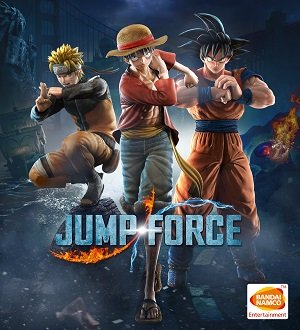 The Japanese producer Shueisha has announced that it has printed 100,400,000 books in Masashi Kishimoto’s Naruto ninja manga series. Shueisha will release the 51st volume of Naruto on Friday. Naruto is the fifth Shueisha manga to surpass the 100-million mark; among others, it follows in the foosteps of Eiichiro Oda’s One Piece pirate manga (189 … Continued