Thanks to her directorial debut last year with film Maquia, Mari Okada is a name fresh in the minds of anime fans. Okada’s a woman of many talents, who mainly works as a screenwriter, but lately she’s started branching out into other roles. Today I’m here to review O Maidens in your Savage Season, the first manga written by Okada. Does it live up to her usual thought-provoking, coming-of-age stories? Let’s find out!

The story follows Kazusa Onodera, who’s part of her high school’s Literary Club. Within this club she and four other girls read and discuss literary classics, but for Kazusa this gives rise to a newfound interest in sex due to the sexual references and euphemisms in the books they read. To make matters worse, Kazusa is crushing on her childhood friend, Izumi – but surely the cute boy she remembers from days past wouldn’t have such impure thoughts?

Each of the girls in the Literary Club have differing opinions when it comes to sex. Kazusa gets embarrassed at the mere thought of it, while the club’s president, Sonezaki, scoffs at those interested in it. Sugawara, hailed as the prettiest girl in the school, wishes to have sex before she dies, while the club’s budding author, Hongo, wishes for sexual experiences to improve the quality of her novels. The only member whose thoughts we don’t yet know is Momoko, as she’s so quiet and reserved that it’s not clear where she stands in all of this. Surrounded by classmates who talk about sex like it’s nothing special, the members of the club feel like the odd ones out.

Although there are five members in the club, this first volume spends most of its time with Kazusa as she fights with her feelings towards Izumi. Back in middle school Kazusa was bullied for being friends with Izumi, who had a cult following of female admirers. Since entering high school, Kazusa has been keeping her distance from Izumi so as not to repeat the situation, but this leads her to develop a distorted image of the current Izumi. Being childhood friends and living next door to one another, Kazusa often brings food over from her family to Izumi’s home, and when she one day walks in on Izumi watching porn, she discovers that he’s just as curious about sex as she is.

If you’ve ever watched any of Mari Okada’s work you’ll instantly be familiar with the characters in O Maidens in your Savage Season. They’re the ‘odd ones out’ in a way that Okada’s characters often are. The emotions the club face and how they’re portrayed are also very distinctly Okada. There’s plenty of humour scattered throughout to balance the serious topics presented but the manga doesn’t shy away from drama either. O Maidens in your Savage Season is by no means as explicit as Scum’s Wish (which is the best example of a similar story in manga) but it’s not afraid to broach the subject of sex, what it means to us as individuals, and how mysterious and fantastical it seems when you’re going through puberty.

I tend to find Okada’s characters and stories relatable more often than not, too. In this case I can certainly understand Kazusa’s embarrassment thinking about sex and her inability to make sense of her feelings for Izumi. It made it easy to sympathise with her and grow attached to her, as well as the rest of the cast of O Maidens in your Savage Season who share similar traits.

Having said all that, if you don’t like the melodrama that comes from adolescent coming-of-age stories, this manga won’t do much for you. Currently it’s not an overly in-depth a look at sex and sexuality and instead more about transitioning from child to adult and the abrupt changes that can bring. However, if this does sound like your cup of tea, then it certainly hits all the right notes for a story of this kind.

The artwork for O Maidens in your Savage Season has been handled by Nao Emoto, who also drew the artwork for Forget Me Not. Having read some of Forget Me Not previously, I much prefer Emoto’s style here. Character designs vary greatly and have childlike round faces with a hint of maturity. Emoto gives the cast a wide range of expressions and is especially good at portraying emotion through their eyes, something I’m always fond of in manga! Character models can look a bit off when they’re in the background of a scene or just in the distance but I didn’t find it too distracting.

O Maidens in your Savage Season comes to the West thanks to Kodansha Comics and has been translated by Sawa Matsueda Savage. The translation reads well and there are some translation notes included at the back of the book. I did notice one oddity where there was a translation note under a panel on the page before the element it was referencing though, which was confusing – especially when there was space to place it on the page in question. The manga is ongoing at 6 volumes in Japan and Kodansha have Volumes 2-5 scheduled for an English release this year. There’s also an anime adaption scheduled for the summer.

Overall, O Maidens in your Savage Season is off to a good start. Fans of Mari Okada’s work will find a lot to like here, as will those looking for a more realistic look at puberty and growing up. With a large cast at its disposal I’m looking forward to getting know the rest of the characters in future instalments.

A free preview of this volume can be found on Kodansha’s website here. 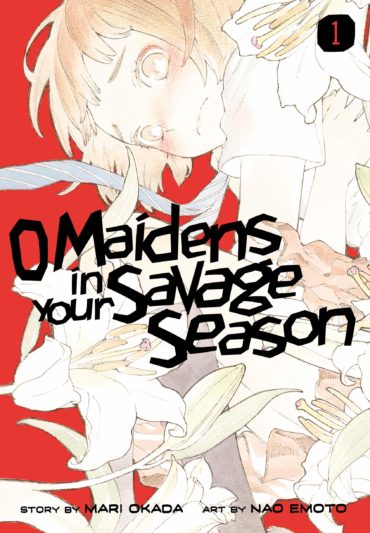