The final volume of O Maidens in your Savage Seasons is here! As this fascinating manga comes to end, we meet up with the Literary Club once more to find out how their stories are going to conclude.

As we reunite with our cast we find the Literary Club putting up a united front against the school. In the previous volume of the series, Sonezaki and her boyfriend Amagiri were expelled under the new no-dating policy and so the rest of the group came together to try and convince the principal to allow them to return.

Of course, it wouldn’t be a cast of Mari Okada characters if this stance wasn’t suitably ridiculous and so the girls proceed to blockade themselves inside the school and kidnap club advisor and teacher Milo-sensei. Although he is bound and gagged, it quickly becomes clear that he doesn’t agree with the principal either and is willing to go along with the Literary Club’s fight for now.

Neither side of the argument is willing to give in and ultimately the principal decides to leave the Literary Club to spend the night in the school, hoping they’ll have seen sense by the morning. With the principal and teachers off the scene, Sonezaki, Amagiri and Izumi all sneak into the school to talk to their friends. This brings with it its share of troubles as Nina, Kazusa and Momo are reminded by Izumi’s presence why they’d been arguing so much recently.

The girls are still caught in a triangle, with Izumi and Kazusa now dating but Nina wanting to confess her feelings to Izumi and Momo being in love with Nina. The whole thing is messy and quickly comes to a head once more in this volume. However, being the final instalment does mean that the storyline finally reaches its conclusion once and for all.

If you’ve watched the anime adaptation of O Maidens in your Savage Season, then you’ll be familiar with how the series concludes. Despite the manga having not quite finished in Japan at the time of airing, it seems the anime was completely faithful to the end of the manga. As someone who has already watched the anime a couple of times, I don’t think I would have been happy had the source material ended any other way, so I’m pleased to see how it turned out.

However, if you don’t know how the series concludes, then let me just tell you that you’re in for a real treat. Here at the end, everything has a dramatic flair that you’ll recognise as Okada’s way of writing stories. It’s not as grounded in reality as the rest of the series, prioritising fun over realism, but I think that’s fine. It still hits all the emotional beats we’ve come to expect from O Maidens in your Savage Season and will leave readers satisfied. There are a couple of minor things I wish the epilogue had expanded on, but those aren’t enough to negatively impact the overall experience.

From beginning to end, this series has been nothing but a gripping and relatable work, supported by lovable characters and beautiful artwork by Nao Emoto. We’ve watched these girls go through so many different problems, many of which we as readers will also have grappled with, and it’s rewarding to see where they stand at the end of it all. Not only that but having been so strong throughout ensures the series will remain in our memories for many years to come.

Volume 8 of O Maidens in your Savage Season comes to the West thanks to Kodansha Comics and has been translated by Sawa Matsueda Savage. As always, the translation reads well with no issues to mention. Included as a bonus at the back of this book is an “O Maidens Recording Sessions Report”, which talks about the voice actors as they recorded their roles for the anime.

Overall, O Maidens in your Savage Season finishes just as it began as a relatable but highly entertaining read. The strengths of Mari Okada’s writing are shown throughout the series but are certainly at their best here for the conclusion. While this volume loses some of the realism we’ve come to know the manga for, it still delivers a fantastic read. This is a story that belongs in everyone’s collection. 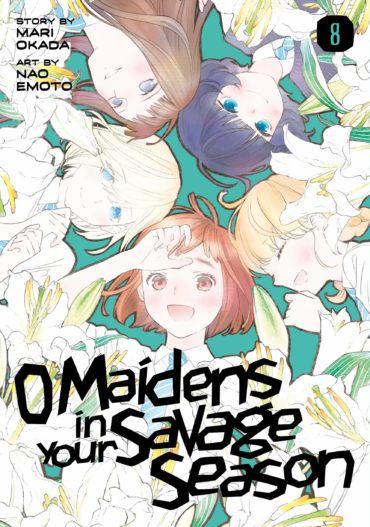