With the anime adaption of O Maidens in your Savage Season in full swing, all eyes are on Mari Okada’s latest hit series. As Kodansha continues to release the manga I’m here to take a look at Volume 3!

At the end of Volume 2 of O Maidens in your Savage Season, Izumi declared that he didn’t want to have sex with Kazusa. This statement understandably hurts our young protagonist and although Izumi tries to reassure her that he just doesn’t think about sleeping with anyone, the whole thing leaves her reconsidering where the two stand.

Elsewhere in this volume, we see the relationship between Sonezaki and classmate Amagi advance. Amagi turns in the fifty page essay Sonezaki demanded he write to explain why he likes her. While Sonezaki is initially put off by Amagi’s somewhat lazy writing, she quickly crumbles to the passion he’s poured into it. For someone who’s always stood apart from everyone else, who was bullied for being ‘ugly’ and quiet, this is a major shift in emotions and Sonezaki discovers feelings she never expected to have.

We also see Izumi and Nina begin to spend more time together, causing Kazusa to worry that she may have a rival for her childhood friend’s affection! In truth, Nina is simply helping Izumi realise that Kazusa has feelings for him, but to an outsider the two do look like they’re becoming more than just friends.

I think Volume 3 does a good job of fleshing out a few of the subplots that have been set-up over the course of the series. Now that we’re familiar with each character and their particular problems, we can finally begin building on them. While Izumi and Kazusa are a constant presence and integral to the series, it’s nice to spend more time with Sonezaki, Nina and the others on their own.

I’m especially fond of Sonezaki’s story and have been rooting for her and Amagi. I can relate to her harsh feelings towards herself and feel she deserves to be happy (and hope she’ll eventually accept that not everyone hates her), so I’m really glad to see someone showing her they care. It’s a great confidence booster for Sonezaki and an important lesson to us as readers that you don’t need to change who you are to find someone who loves you.

The one thing I will say though, is that Nina has had a fairly… problematic backstory established. As she becomes better friends with Izumi, Nina opens up about her time in a theatre troupe aged 11. There she met stage director Hisashi Saegusa, who quickly fell for the young Nina and favoured her above the other children. Although Saegusa finds young children inspiring for his work and lusts after young girls, he never once laid a finger on Nina (or anyone else as far as I can tell).

The issue I have isn’t necessarily with the backstory, but more with the fact that Saegusa has been brought into the cast in the present day as well – with Nina looking for guidance from him. It’s a creepy relationship and I’m not entirely convinced I’m going to like where it goes but I also have faith in Okada as a writer that this arc has an important meaning at some point. We’ll have to wait and see what happens there.

O Maidens in your Savage Season Volume 3 comes to the west thanks to Kodansha Comics and has been translated by Sawa Matueda Savage. The translation reads well and is, as always, problem free. 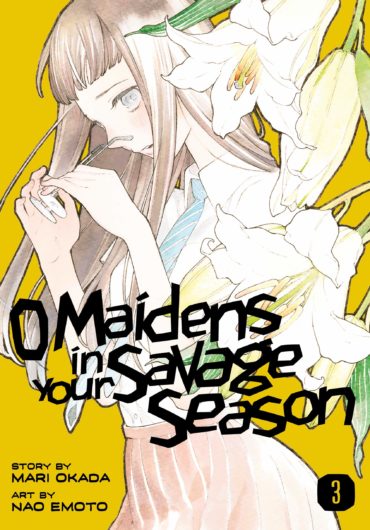