Some of you reading this may already be familiar with the title I’m Standing on a Million Lives. The manga has been published digitally by Kodansha since July 2018 and has now come to  the physical market. The series promises to bring something different to the fantasy genre, but does it succeed? Let’s take a look!

The story follows ninth-grader Yusuke, who has no aspirations for the future and just wants to go home and play video games. On a day like any other, Yusuke is completing his class duties and preparing to go home when he suddenly finds himself in a fantasy world! However, it’s not just Yusuke who’s come to this world but also two of his classmates – Shindo and Hakozaki. Shindo is one of the most popular girls at Yusuke’s school and has recently made her debut as a model. Meanwhile, Hakozaki is a shy and frail girl.

Shortly after being transported to this world, Yusuke and the girls are greeted by Game Mast, a mysterious being who brought them there. Game Mast explains that Yusuke and co. are there to complete a quest and will have to go through eight rounds (although Shindo and Hakozaki have already played a round). If one member of the party dies, they can be revived, but if everyone dies, then they’ll die in real life – and they’ll also die if they fail a quest. As each round goes by, a new member will join the group.

With the rules of the game laid out, Yusuke must spin a wheel to decide on his class! Unfortunately, Yusuke has bad luck and ends up as a farmer, which is fairly useless to the group. Thankfully Hakozaki is a warrior and Shindo a mage, so they at least have some fighting capabilities. Together the three set out to complete their first quest: defeating a troll. The odds are against them, but perhaps they can muddle their way through to victory?

The set-up for I’m Standing on a Million Lives is fairly generic. There are some twists to the formula to keep it interesting as the volume continues, like the fact Game Mast is from the future, but it’s hard to overlook the weak start. This is only exacerbated by an unlikeable trio of characters.

Yusuke has a bad habit of never saying what’s actually on his mind. This leads to awkward situations between him and the girls, but on top of that – he just doesn’t care about working in a team. Worse still, Yusuke doesn’t show any real willingness to change his ways. Shindo is your average popular girl who’s close to Hakozaki but doesn’t trust Yusuke. Hakozaki, for her part, is a quiet girl with an unnamed illness in the real world which has left her unable to join any after-school activities. She and Shindo seem like an unlikely couple to be friends, but a dark history of Shindo’s has led her to be protective of those weaker than her.

Even putting aside my issues with Yusuke I feel as though the girls only exist for Yusuke to save them and that exact situation plays out in this volume with Hakozaki. It’s difficult to cheer on any of the cast when their personalities feel so manufactured, especially with no meaningful development in sight.

I’m Standing on a Million Lives has been created by Naoki Yamakawa and Akinari Nao (Trinity Seven) with Yamakawa in charge of the story and Nao handling the artwork. The story almost feels as if it would be better suited to a novel format as the manga is very dialogue-heavy and perhaps it might have flowed better that way. Nao’s artwork is good during fight scenes with easy to follow shots and panelling, but I found the character designs generic and backgrounds were often empty or lacking in detail. It’d be one thing if the story held its own, but it doesn’t and Nao’s artwork isn’t good enough to overturn the bad impression the rest of the piece gives.

As previously mentioned, this series comes to the UK thanks to Kodansha Comics. This volume has been translated by Christine Dashiell and the translation reads well. I’m Standing on a Million Lives is on-going in Japan at seven volumes, six of which Kodansha have published digitally in English so far.

Overall, although I’m fond of the fantasy genre, I came away from I’m Standing on a Million Lives cold. If you can overlook the unlikeable cast then I think there might be something worthwhile in the plot, but otherwise there are much better series available to check out.

A free preview of Volume 1 can be found on Kodansha’s website. 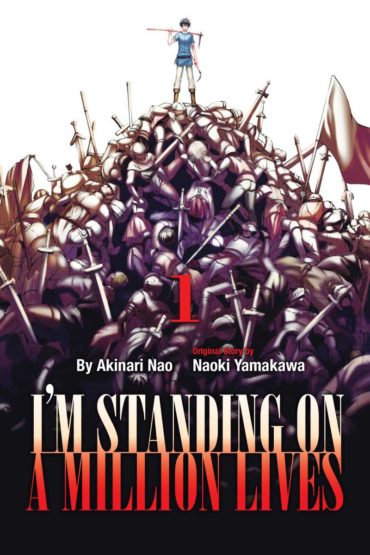