Two years ago, Hiro Mashima’s beloved Fairy Tail manga came to an end, and the anime adaptation is also reaching its conclusion this Summer. However, some of us aren’t quite ready to let the series go. As it turns out, neither is Mashima! Today I’m here to check out the sequel we’ve all been waiting for: Fairy Tail: 100 Years Quest. Does it live up to the original series? Let’s find out!

We reunite with the Fairy Tail guild one year after the conclusion of the original series. Nothing much has changed for our heroes since we last saw them but Fairy Tail has recruited a new member! New girl Touka has come to the guild chasing after Natsu, whom she proclaims to be in love with. Unfortunately for her, Natsu, Lucy, Erza, Wendy and Gray are off tackling a new quest that has been unaccomplished for over a century.

With an adventure of a lifetime ahead of them, it could be some time before our heroes return home but perhaps this is for the best as Touka isn’t the sweet and innocent girl she first appears to be. Unbeknownst to the Fairy Tail guild, Jellal is travelling around trying to find information on Touka and warning those he speaks with to avoid her at all costs.

Elsewhere, team Natsu are shocked to discover that the 100 Years Quest involves sealing away Five Dragon Gods on the continent of Guiltina. Each god is said to be just as powerful as Acnologia, but Natsu is undeterred and the team sets out to accomplish the quest at all costs.

Fairy Tail: 100 Years Quest feels like a natural continuation for the well loved franchise. Following team Natsu as they embark on their next adventure is great fun, especially when it involves dragons and a brand new continent. This first volume contains 9 chapters, which do a good job of finding the balance between following Natsu and co. while also swapping back to the guild and other characters occasionally. It offers the opportunity for subplots to run alongside the 100 Years Quest, and with a cast as large as Fairy Tail’s that’s certainly welcome.

While this manga is considered a sequel to Fairy Tail it’s not all being handled by Hiro Mashima. As Mashima’s currently working on his new series, Edens Zero, he’s handed over art duties to Atsuo Ueda and only provides layouts and the story for Fairy Tail: 100 Years Quest. It’s always a little bit worrying when a series is handled by another artist but thankfully Ueda is doing a great job at capturing the original style of Fairy Tail.

The characters for the most part look similar to how they would if Mashima was drawing the series. There are some subtle differences (namely with Happy looking off-model in some shots) but they’re not enough to be an issue. If you haven’t read Fairy Tail in a while, I’d even go as far as to say that you likely wouldn’t notice the difference. I didn’t at first! My only minor concern is how Ueda’s art will be when it comes to fast-paced battle scenes, as this volume doesn’t have enough action to say yet if they’re up to snuff. Mashima has such a good sense of how to panel and angle battles that I’d be disappointed if Ueda couldn’t live up to that.

The nice thing about this sequel is that it doesn’t just feel like a ‘cash-in’ either. Fairy Tail has so many characters and stories that this both feels natural and in a good position to build on some of the cast’s stories. For example, the beginning of the book hints that Lucy may be reunited with a loved one on this quest, which would be really wonderful to see. Fairy Tail: 100 Years Quest is a great read for anyone who wanted more Fairy Tail.

It’s worth noting that this series is not newcomer friendly. It definitely acts under the assumption that you have read (or watched) the entirety of the original Fairy Tail series, so be warned!

This release comes to the UK thanks to Kodansha Comics and has been translated by Kevin Steinbach. The translation reads well and is problem-free. The series is currently ongoing in Japan at three volumes and Kodansha currently have Volume 2 scheduled for an English release in November, with Volume 3 following in February 2020.

Overall, Fairy Tail: 100 Years Quest is a wonderful return to the franchise. Longtime fans will be overjoyed to be reunited with their favourite characters as they embark on a whole new adventure. As someone who can never get enough of Fairy Tail, I will certainly be eagerly awaiting every volume. 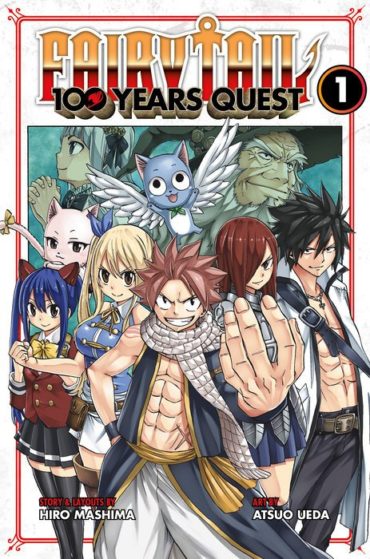