We’ve reached the fourth volume of Fairy Tail: 100 Years Quest and now our heroes are busy working out how to deal with the Wood Dragon God Alderan. On top of that, Juvia arrives with an urgent message signalling that the members of Fairy Tail are in grave danger!

The guild has been taken over by the White Mage Touka, who has brainwashed everyone and wants to claim the power of the Five Dragon Gods for herself. Unfortunately, Natsu’s team already prevented Touka from getting her hands on the power of the Water Dragon, but that doesn’t stop her trying to capture the Wood Dragon! With Fairy Tail under her control, she sends Laxus’ team as well as Mirajane, Lisanna, Elfman, Levy, Gajeel and Jellal after Natsu and his party.

Seeing no choice but to split up to protect Alderan, Natsu and his group set out to protect the dragon. However, at every turn, they’re faced with their friends and guildmates who are looking for a fight! Will Touka prevail or can our heroes knock some sense back into their friends before something terrible happens?

Admittedly this plot twist feels like an excuse to use the other characters in the Fairy Tail universe. We’ve been seeing Jellal and Laxus here and there throughout the previous three volumes, but for the most part, the focus has been on Natsu’s party. For fans of this huge franchise it’s certainly nice to see our favourite characters be given a moment in the spotlight, but turning them evil does feel a little bit forced.

That said, while Gajeel is more than happy to have an excuse to beat up Natsu, when it comes to Jellal (who is facing off against Erza) things unfold quite differently! Jellal has no interest in fighting Erza and instead proclaims that he’d much rather spend his time “getting it on” with her and vows to protect her from anyone who dares interfere with their time together. As someone who has a soft spot for the relationship between these two, I thought this was an entertaining development and better fitting than the characterization of some of the other ‘evil’ Fairy Tail members.

Perhaps the biggest problem with Touka brainwashing Fairy Tail is that it has created a third faction fighting over the dragons. The series already has the Diabolos guild who are after the dragons for their nefarious plans. There is already so much to keep track of that I worry the plot is becoming unwieldy. It’s going to be difficult for Hiro Mashima to balance all these different sub-elements and while I have faith he can achieve it, I can’t help but worry, all the same.

Despite my concerns about the direction of the story, it’s hard to deny that this is another fantastic instalment in the series. Mashima and artist Atsuo Ueda have gotten into a solid groove of offering plenty of plot exposition and action scenes. The fights in this volume, in particular, are some of the best so far and it’s nice to see Ueda living up to Mashima’s legacy for captivating battles.

Fairy Tail: 100 Years Quest comes to the West thanks to Kodansha Comics and has been translated by Kevin Steinbach. The translation reads well with no problems to note. Volume 5 of the series is scheduled for release in October.

Overall, Fairy Tail: 100 Years Quest continues to be a wonderful addition to the franchise. While this volume shows signs of the plot becoming unwieldy, it does also make great use of Fairy Tail members who aren’t in Natsu’s party. Fans of the series will certainly be happy with the developments this time around. 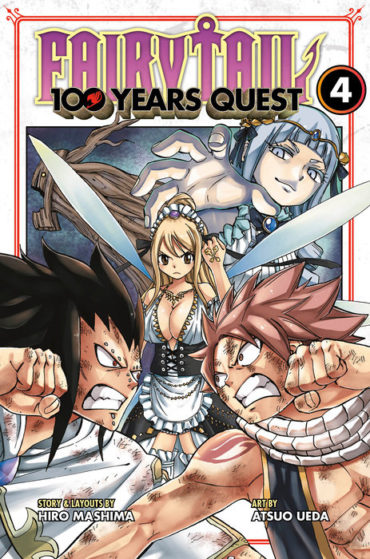