Since starting to release Fairy Tail: 100 Years Quest in 2019, publisher Kodansha Comics has rapidly caught up to the Japanese releases. Now the speed of English releases is beginning to slow down but that doesn’t stop us beginning a new year with the latest instalment in the series!

As we reunite with our cast, there are only two spheres on the Wood Dragon to protect. While a lot of the battles concluded in Volume 5, this time around Natsu finds himself facing Touka while Wendy is still fighting Nebaru from the Diabolos guild. Having already destroyed a number of the spheres, team Fairy Tail absolutely can’t afford to let the same happen with these two – but can they overcome the challengers in front of them?

Most of the focus of this volume is on Wendy’s fight with Nebaru, who has stayed to continue his fight with her, despite being told to retreat by his guildmates. Backed into a corner, Nebaru uses the power of the “Generation Five Dragon Force”, which is forbidden by Diabolos.

Using the Dragon Force, Nebaru can overpower Wendy but before fatal damage can be done, our heroine calls upon a new power all of her own. Wendy enchants her body with the memories of Irene Belserion, a powerful mage who can give her the magic she needs to finish off Nebaru once and for all.

Readers may remember Irene Belserion as being Erza’s mother and a difficult foe that our heroes had to overcome toward the end of Fairy Tail. When we last saw her she was dead, but as we all know author Hiro Mashima is not particularly fond of killing or keeping his characters dead, so perhaps her revival should come as no real surprise!

It has to be said that in the few chapters in which we see Irene it’s unclear if she’s an image Wendy has conjured up or if her spirit is still floating around in the world. Considering she talks about finding a new body to inhabit, it seems to be the latter, but since Wendy called it magic using her memories of Irene, it throws some doubt into the mix. Whatever the case, I did grow fond of the character, so I’m not bothered by her returning. I’m sure some readers will groan though!

Speaking of new magic, in my last review I talked about Natsu getting the ability to turn into a spirit and how I hoped it wouldn’t be a recurring power. Thankfully this book put my worries to bed as Natsu never once turned into a spirit while facing Touka. Through the battle between the two, we also get to learn a little bit more about Touka’s history, which is something we’ve all been waiting for.

Compared to Volume 5, I think this one holds together better in terms of its story and pacing. Where the last book was a bad dash between characters, this one is more focused. Also despite a character being given a huge power-up, it at least feels like it makes more sense within the Fairy Tail universe than Natsu’s did previously, which leaves the reader more satisfied.

Fairy Tail: 100 Years Quest Volume 6 comes to the West thanks to Kodansha Comics and continues to be translated by Kevin Steinbach. The translation reads well with no issues to note. Volume 7 of the series is currently scheduled for release in April.

Overall, Volume 6 of Fairy Tail: 100 Years Quest proves to be one of the better entries in the series so far. Although long-term readers may groan at the author’s decision to bring back one of the old characters, I’m looking forward to seeing how that plotline progresses in the future. 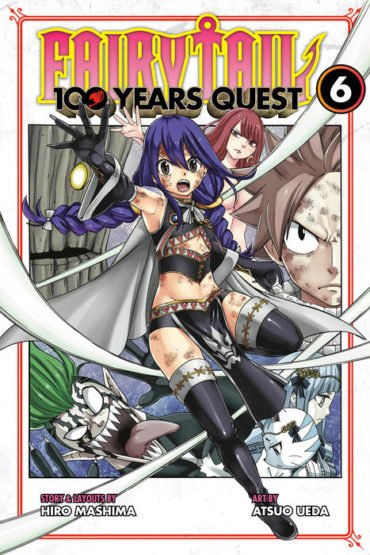