High schools with mysterious transfer students and overbearing student councils may not exactly be original concepts for an anime series, but what if you traded love letters in lockers for chips on a game board, or summer holiday tests of courage with Russian Roulette? Well, you would have a series as uniquely bizarre and mesmerising as Kakegurui: Compulsive Gambler!

Gambling is king at Hyakkaou Private Academy, where the children of society’s elite spend their time outside classes staking more money than we can imagine on everything from rock-paper-scissors to Indian poker. Those who can’t keep up and fall into debt are designated “house pets”, the abused lower ranks of the school’s social hierarchy. It’s a cruel system, but it works… until the arrival of Yumeko Jabami. She looks sweet and unassuming, yet her passion for high stakes thrills can’t be controlled by petty things like logic or reason, and the tempestuous storm she kicks up soon earns the attention of the student council’s iron-clad rule.

Adapted from the manga by Homura Kawamoto (story) and Toru Naomura (art), the first season of MAPPA’s anime debuted on Japanese TV in July 2017, before making its way overseas via Netflix in February 2018. With a second season having launched in June, May 2019’s MCM London Comic Con provided the perfect opportunity to talk with the event’s Anime Guest of Honour, director Yuichiro Hayashi (Garo: The Animation), about the series and what we can expect from its return!

What inspired you to pursue a career in anime, and how did you get your start in the industry?

With its focus on gambling, Kakegurui has a really unique set-up compared to other anime. What first drew you to this project?

So for me, Kakegurui was very, very different from anything I had done until that point. I’m sure you know, up to that point most of my repertoire had been action animation like Garo [The Animation] and those kind of series. Those had a lot of male characters, but Kakegurui has a primarily female cast, so I thought that was quite interesting. Also, the fact that they’re gambling at school, and there’s almost no action to speak of in the entire series. So it was almost a complete 180 to what I had done in my previous work; I thought that was a tremendous challenge to me, and something that I was really interested in, and looking forward, to taking on.

I really liked how the art style of the show contrasted between the quite alluring and beautiful, to suddenly ugly character reactions. How difficult was it to strike that appealing visual balance?

Of course, this is building on the original manga. In the original manga, the artwork is quite beautiful, but then all of a sudden you’ll have these strange, almost grotesque faces. So, it was finding the best way to extrapolate off of what was already there, but one of the things I really paid attention to and was very careful about, was striking the balance. Even though it is grotesque, it’s not necessarily going over into the realm of obscene; it’s both ugly and beautiful. So I wanted to stay away from those really obscene expressions and gestures, and really bring that into a realm where there’s both beauty and ugliness, kind of co-existing in the same space.

That kind of really fits the whole general feeling of gambling, doesn’t it? Like, how you have the highs, then the ugly lows?

I think that’s an interesting point. In gambling, I think in one way it brings out human greed, but on the other hand, you have this kind of emotional release and excitement, because there is so much risk, and there is the potential that – depending on the game you play or how high the stakes are – that you could lose everything. So there’s this interesting play between those two elements. Speaking of the emotion of gambling, there’s so many extreme characters and performances to match, like those from Saori Hayami [Yumeko Jabami] and Mariya Ise [Midari Ikishima], what was it like working with the cast on these emotive performances?

I didn’t really go into too much depth with the actresses. As you can tell from the finished series, the artwork itself kind-of almost directed the actresses for us; it told them really where we needed the emotion to go, and the feelings behind the scene. Especially with Midari, who is played by Mariya Ise, the character was quite extreme to begin with, and that gave her the starting point. She really just built up on that. We would maybe give specific notes about different details of the performance, but there was quite a clear road map of where we wanted the emotion behind each scene to go.

How was the decision made to have Kakegurui Season One end with an anime-original finale, and what was it like working with Kawamoto-sensei on the scenario?

The biggest inspiration and reasoning behind doing that, was obviously the manga series itself wasn’t concluded, and we really needed to find a way to create some kind of anything within the limitations of a twelve episode season. From the beginning, we had discussions with Square Enix and Kawamoto-sensei about perhaps wanting to do something original that could bring the first season to a close.

Kawamoto-sensei was actually involved from the beginning; he sat in on all of the script meetings and read-throughs, so it was a very congenial atmosphere and this was something we had in mind from the very beginning. So it was a very natural progression into that kind of original work.

The writer Yasuko Kobayashi wasn’t very versed in the rules behind gambling and how to create a specific game, so that’s where we worked with Kawamoto-sensei, to have him bring his expertise and come up with the format and what the game itself would be. So we worked directly with him to create that final episode.

The ending of Season One left me desperate for more, so with Season Two launching internationally soon, could you offer a tease of what fans can expect?

We’re going to have a chance in the second season to really explore in more depth what a year in these characters’ lives look like, to explore more of the emotional depth behind the characters. We’re also going to be including the Tower episode that would have been the ending to the first season, so for any fans who were disappointed by its absence from Season One, I hope that you’ll look forward to that. If I were a student at Hyakkaou Private Academy, I’d probably be a pet in my first day – but how would you fare? Do you have any personal experience with gambling?

I also really don’t have any experience with gambling, and I’m quite weak when it comes to that kind of competition, so I would probably be a “pet” right there along with you as soon as I entered the school. I don’t think I would fare very well! *laughs*

Thank you very much. It’s been great talking to you.

It was great talking to you as well. Thank you.

Later that day, I also attended the panel hosted by Mr. Hayashi, where I learned some interesting facts about Kakegurui’s production! Recordings and photographs were prohibited, but Mr. Hayashi walked attendees through the life cycle of various scenes from the series.

Starting with pages of the original manga, he detailed the rough and revised storyboard stages, explaining his reasoning behind even subtle changes, like altering a scene’s perspective to make it easier for audiences to follow. Mr. Hayashi then treated us to glimpses of those scenes at an earlier stage in the animation process, noting that voice actors will sometimes have to record with these unfinished versions as references. While this sounds like an inconvenience at first, he did mention that this also allows them to fine-tune the animation to fit an actor’s performance. After taking us through the different production stages, we were treated to the finished scenes. For someone who loves seeing production materials and other behind-the-scenes aspects of anime and films like myself, it was a rare and fascinating treat.

The panel and the Q&A session that followed also revealed some interesting pieces of trivia, like the influence of at least two western films on the anime. Mr. Hayashi revealed that a scene in Kakegurui’s final episode, of Yomozuki surrounded by a circle of Tarot cards, was a homage to a similar shot of The Joker in Suicide Squad, and that upgrading Ikishima’s padded room to a dingy dungeon was inspired by the Saw movies. When asked by a fellow attendee, he also revealed that Zack Snyder (Batman v Superman: Dawn of Justice) is his favourite director.

Kakegurui: Compulsive Gambler Season 1 is streaming on Netflix now, and Kakegurui xx has just launched on 13 June 2019. The first season has also been licensed by Anime Limited, with a home video release planned for later this year. 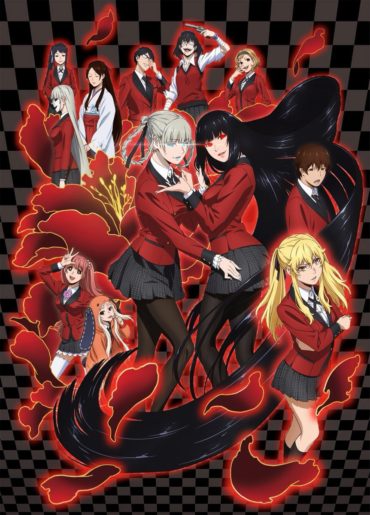 Crunchyroll and Anime Limited have announced plans to host the UK premiere of anime sequel film “Saga of Tanya the Evil: The Movie” at MCM London Comic Con this Sunday!

Anime Limited provided an update on their entry to Vinyl at MCM London Comic Con for May 2019.