Over the Summer publisher Kodansha Comics began releasing the fascinating new series Magus of the Library in English. Now Volume 2 of the manga has arrived and it’s time to find out how aspiring ‘Kafna’ Theo is getting on as he sets out on a grand adventure.

We reunite with our young protagonist seven years after the end of Volume 1. Theo is now 13-years-old and leaves his hometown behind to travel to Aftzaak, where he’ll take the exam to become a Kafna (and hopefully return the book lent to him several years ago). The road ahead of him may be a long one but the friends Theo makes along the way will keep him going.

While the first volume of Magus of the Library focused on the importance of libraries and books in people’s everyday lives, this instalment is much more focused on Theo and his journey. By the end of the book we’ve reached Aftzaak and the Kafna exam but before that, our hero gets himself into his fair share of trouble! This includes helping a young girl come to terms with her older sister’s marriage, preventing book theft, and rescuing a Hulua (a type of rodent) from an abusive owner.

During this book Theo also meets two other individuals looking to take the Kafna exam: a girl named Mihona and and a boy named Alv. Initially both Mihona and Alv look down on Theo, telling him that he’ll never be able to pass the exam, but as they travel together our plucky protagonist wins them over with his passion and knowledge of literature. Mihona and Alv appear to have fairly interesting stories of their own that have yet to be told, and I’m certainly looking forward to finding out more about them – especially now that they’re travelling with Theo. Alv in particular is alluded to be from royalty or at least a notable bloodline, so I think it’ll be fun to see how that eventually plays out.

Although this volume of Magus of the Library has shifted its focus somewhat, it’s still the same book-loving series we came to know and love in the beginning. In particular, there’s a whole chapter about Theo visiting the town of Itzamna, home to book-sellers row. The town is renowned for offering all of the latest novel releases and Theo’s expressions while visiting the various stores are utterly adorable (and relatable in my case!).

I think this entry of the series does a good job at fleshing out the world and characters more than the first time around. We now have a better understanding of what the world outside Theo’s village looks like and how difficult it is for a man to become a Kafna. I also appreciate that we have a clear goal for the rest of the series – Theo becoming a Kafna – because that’s something the first volume left me worried about.

Story aside, mangaka Mitsu Izumi has continued to do a truly fabulous job with the artwork. The world is full of life and Izumi draws her cast with a wide range of expressions. The two-page spreads I loved so much from the last volume also make a return to offer some truly breathtaking displays. All-round, there’s nothing to complain about here!

As previously mentioned, Magus of the Library continues to be released in English thanks to Kodansha Comics. Translation has been handled by Stephen Kohler and reads well with no issues to speak of. The third volume of the series is currently scheduled for November, so there’s not long to wait to find out more about Theo’s grand adventures!

Overall, Magus of the Library continues to impress with its likeable characters, fascinating story and beautiful artwork. Now that my concerns from the end of Volume 1 have been alleviated, I’m looking forward to seeing where Theo’s journey takes him and if he truly can become a Kafna. One thing is for sure, this is an adventure not to be missed. 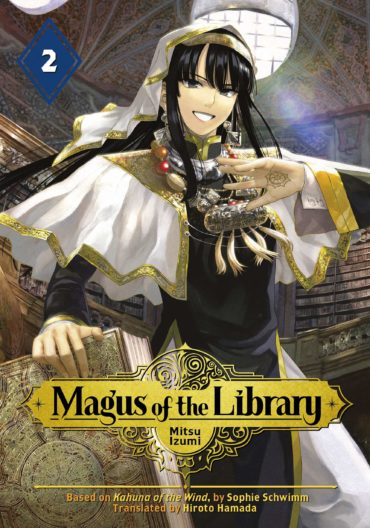 Title
Magus of the Library Volume 2

Magus of the Library Volume 1 Review

Overall, I loved every second I spent with Magus of the Library. Theo is a likeable main character, with a passion for books as mighty as my own. The story itself is relatable to anyone who loves printed media, and younger readers will be captivated by the fantasy elements.