Since Kodansha got caught up with the Japanese releases of Magus of the Library, we’ve had quite a wait for a new instalment. Over a year after the release of Volume 3, the latest entry in the series is here – but does it continue to impress? Let’s find out!

In this volume of the series, we reunite with Theo as he returns to Aftzaak, the magisterial City of Books. Having passed the exams to become a Kafna, our hero now has to compete against the other trainees and decide which of the twelve offices he wants to work under after his training is over.

On their first day of training, the young Kafna are given a test, which shows Theo that those around him are much more talented than he is. Many of the Kafna have spent longer studying for the role than Theo has, but with only the top three in the class being able to choose to join whichever office they want, he soon realises that he’s got a lot of catching up to do to decide his future. If he doesn’t make it into the top three then his teachers will assign him to an office they think he’ll be suited to.

This book is focused largely on self-discovery for Theo. Not only does he need to get used to a new routine, with new teachers and people to get to know but he also needs to figure himself out. Becoming a Kafna was such a big dream that Theo never thought about what would happen if he passed the exams. Now he’s surrounded by people who have got it all figured out, including some of the friends he made during the exams.

However, by the end of the volume, Theo is much closer to figuring out his future and for us as readers, his journey to that point has been rewarding. The thoughts and feelings he faces are similar to things many of us will have been through as well, especially in education and picking a path to follow.

Of course, this only works so well because mangaka Mitsu Izumi is incredibly good at conveying emotion through their artwork. Once again this book is full of incredibly detailed pages and two-page spreads, that keep you looking over them for quite some time to capture every small detail. Coupled with the charming cast and thought-provoking dialogue, this truly is a fantastic series.

Theo has come a long way since he was introduced in Volume 1, but what I really like about his story is the sense that we’re growing alongside him. There is a lot of history to this world and the various factions in it and each book gives us glimpses into it while not overloading us with detail, which is important. It would be so easy for the author to just info dump on Theo (and therefore the reader), but instead, we learn things through much more organic conversations.

While this part of Theo’s journey is likely to be quite similar in structure to when he was taking the exams, I’m still looking forward to seeing how it advances. While the exams were about learning the rules of being a Kafna, this arc is about finding yourself and I think that’s going to be interesting from both Theo’s perspective and the characters around him who have their struggles.

Magus of the Library Volume 4 comes to the West thanks to Kodansha and has been translated by Stephen Kohler. The translation reads well with no issues. Volume 5 of the series is currently scheduled for an English release in November.

Overall, Magus of the Library continues to be a delightful read. Theo’s journey is only just getting started and now I’m excited to see the path he will choose for himself, having overcome so much to get to his position as a trainee Kafna. 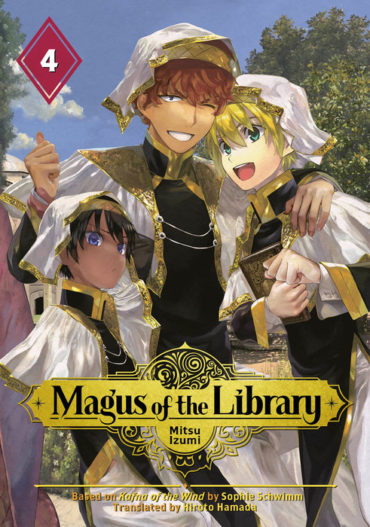 Title
Magus of the Library Volume 4