This time last year the Granblue Fantasy anime had just received a home video release thanks to MVM Entertainment. This year the second season of the series has just begun to air in Japan (available on Crunchyroll outside of Japan). With this in mind, what better time for the manga adaption to come to the West? Today I’m here to check out the first volume to find out if it’s worth your time!

The story follows protagonist Gran and his talking dragon companion, Vyrn. Gran lives out his days peacefully but dreams of leaving his home of Zinkenstill behind to chase his father, who is said to be waiting for him on the legendary island – Estalucia. One day Gran’s life changes forever when he meets a young girl called Lyria, who is on the run from the Erste Empire and crash-landed on the island with her guard Katalina Alize.

Unable to turn a blind eye to those in need Gran quickly jumps to the aid of Lyria and Katalina, helping to fend off the soldiers after them. However, his luck runs out when the empire summons a hydra and he is fatally wounded. Lyria casts a spell which revives Gran, but at the cost of tying his life to her own. Now the two can’t be parted, but perhaps this is the excuse Gran needs to finally see the world for himself. That’s if he can take down the hydra this time!

Although the set-up for Granblue Fantasy isn’t all that original, the manga sets itself apart with its charming main characters. At first glance, Gran is your average JRPG protagonist who’s full of guts and determination, but underneath he’s surprisingly thoughtful. Meanwhile, Lyria has had a sheltered upbringing, so she’s quite shy but has a strong desire to live her own life. She pairs up well with Gran and the two together cover for one another’s shortcomings.

If you’re familiar with the Granblue Fantasy mobile game or the anime adaption already then you’ll know what you’re getting with the manga. The story seems to be untouched, but that doesn’t mean it’s a bad read if you’ve already experienced it. Although I’ve not played the game, I have seen the anime and still had a great time revisiting the series in manga form. If you’re completely new to the franchise, then I highly recommend giving this volume a look as it’s an inexpensive and great way to do so.

This manga adaption has been handled by Makoto Fugetsu (credited for layouts) and cocho (illustrator) and it looks fantastic. The artwork brings out the charms of the cast with expressive facial designs that play up both the series and comedic pages extremely well. Panels are often quite busy with a lot happening scene to scene, but the team do dedicate beautiful two-page spreads to the most impactful moments. I also want to praise the illustrations of the hydra in this volume because it’s very detailed and gives off an aura of being dangerous – as you’d expect!

Granblue Fantasy Volume 1 comes to the West thanks to publisher Kodansha Comics, who have released it in their bigger format like O Maidens in your Savage Season and Magus of the Library. There are some lovely colour pages included at the beginning of the release as well. This volume has been translated by Kristi Fernandez who offers a solid translation. It looks like all the Granblue Fantasy specific terms are in-keeping with other translations of the franchise, which is always nice to see for something so popular. The series is on-going in Japan at 6 volumes and Kodansha has Volumes 2-5 scheduled for release between December and June 2020.

Overall, Granblue Fantasy Volume 1 is a stellar start to a beloved fantasy franchise. Fans of the series will be pleased to read this entertaining and accurate take on the story, while newcomers will be captivated by Gran and Lyria’s adventure. A release not to be missed!

A free preview of Volume 1 can be found on Kodansha’s website here. 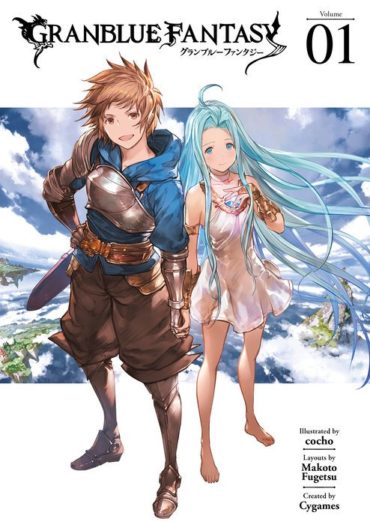