Along with the likes of Mobile Suit Gundam Wing and Mobile Suit Gundam Seed, Mobile Suit Gundam 00 is one of the few more popular Gundam entries in the West, most of which originally appeared at key generational points in the western anime fanbase. 00 sits with Seed in the mid-2000s anime peak, and rather than have the series be another space epic, 00 places itself closer to home, with a politically charged story that was very relevant for the time, focusing on things such as the depletion of the Earth’s natural resources and the growing threat of global organised terrorism. 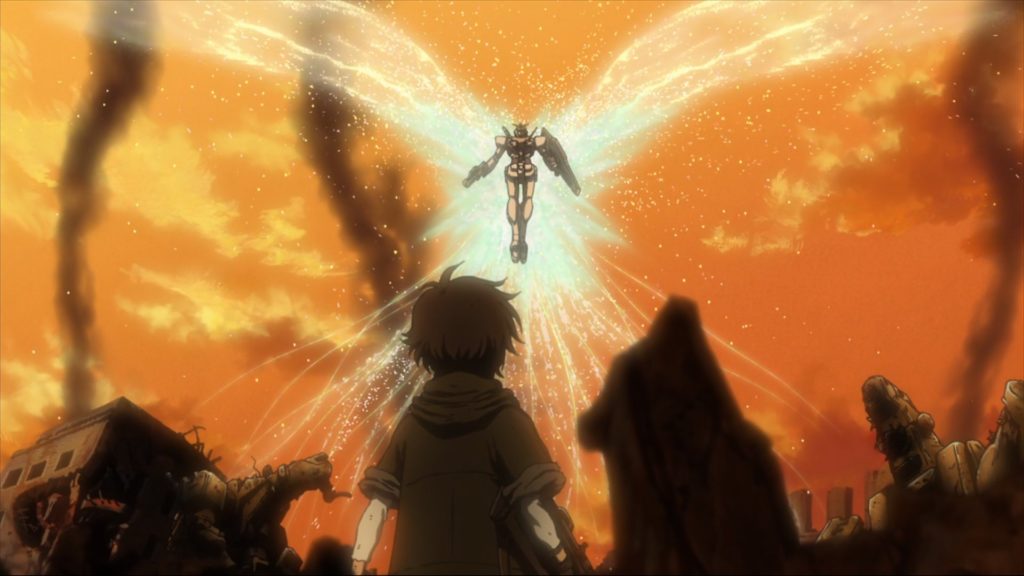 Taking place in the year 2307 AD, humanity has constructed a planetary ring of solar energy-gathering satellites, supported by three enormous Earth-to-space pillars known as Orbital Elevators. Each of these is controlled by one of the planet’s major superpowers: The Advanced European Union, covering most of Europe and Africa; the Union of Solar Energy and Free Nations, encompassing the Americas, Australia, New Zealand and Japan; and the Human Reform League, taking in Russia and the mainland south and east Asian nations.

While this system guarantees these nations an endless supply of renewable energy, many nations that staked their economies on the oil industry, particularly those in the Middle East, have been excluded from these pacts and have seen their countries descend into chaos, poverty and constant wars over the little remaining natural resources. 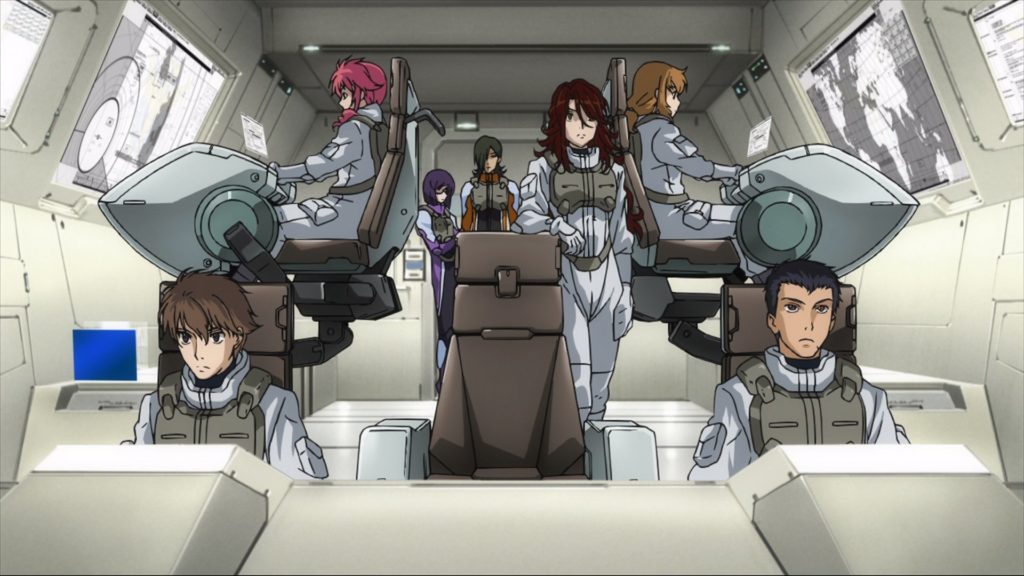 If you can’t already tell, the plot of Gundam 00 is quite a heavy one to get into, and the series opts for a slow start as it needs to establish all of the different factions and characters in play in this complex world. Initially I found this confusing and a little bit off-putting as you are bombarded with acronyms, jargon and technobabble; yet as things start to get going and the world takes shape it actually becomes quite a fascinating series as it shows the world viewed from different angles.

While the show’s main point of view is that from Celestial Being, each faction has its own specific story to tell which really deepens the world building and reinforces the show’s main themes, showing not just the entire overarching battle but how it affects different groups of people. I like how it particularly focuses on the lives of civilians, primarily shown through the viewpoints of students Saji and Louise, and how war and conflict might seem far away from a peaceful nation, but can actually trigger some horrific side effects, whether that be the loss of civilian life or power games played between powerful individuals that ignore the human cost. 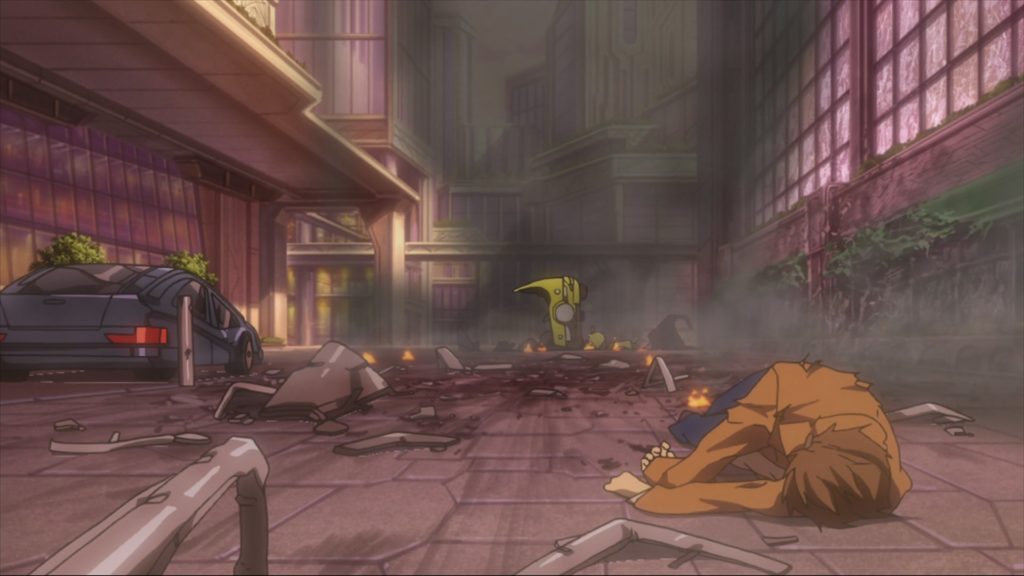 It certainly gets deep at times and often has a lot of things going on, but it does well in holding everything together, as the actions taken by Celestial Being start to generate a snowball effect of one event leading to another, putting all of the pieces in the right places for the explosive second half of this set.

While that is when the series becomes more action-focused, it’s not like the first half is particularly action-light, as we continually see Celestial Being’s Gundams head into action in hilariously one-sided battles. With combat abilities far exceeding anything else on Earth, to say the Gundam mobile suits are overpowered would be an understatement, and for a time it actually works really well to create a spectacle. Seeing the Gundam Exia dance around and slice up its opponents, or the Gundam Virtue take out everyone at once with its giant beams of death is very satisfying; however, there’s only so much of this walkover that you can take and it does start to get somewhat boring towards the midpoint as you wait for all of the other factions to catch up. 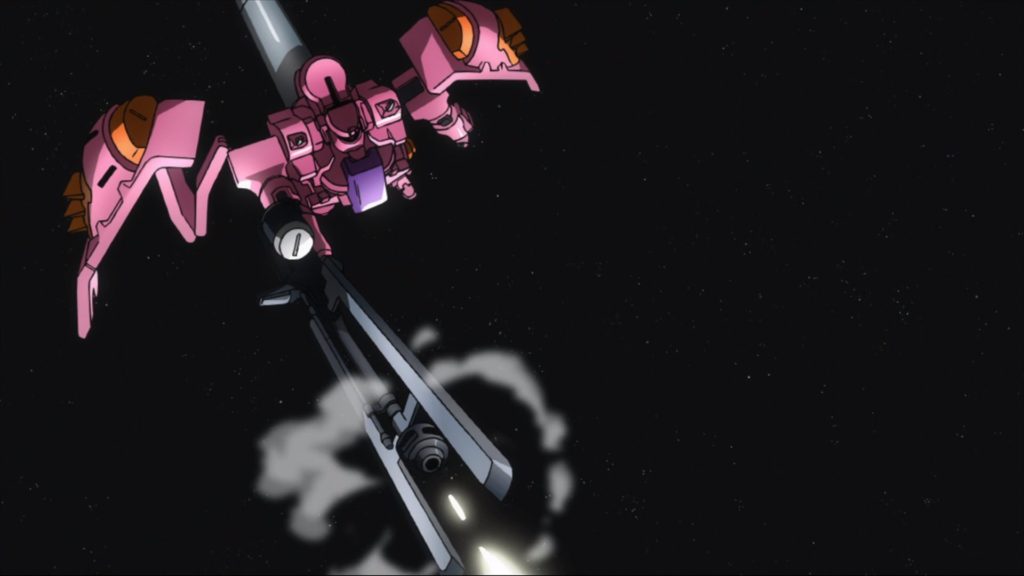 When they do, however, the series really puts its best foot forward in some terrific mobile suit battles. Everything is generally well animated and the action is fast and fluid, with the space-based combat being able to show each mobile suit’s abilities a lot better than having them stuck on the ground. Their designs are also really good, and I quite like how each Gundam specialises in a specific area: the Exia is an up close and personal melee unit, the Dynames is a sniper, the Kyrios is a versatile and mobile mid-range mobile suit that looks like a fighter jet, and the Virtue is essentially a tank and used for heavy bombardments. By having specific roles, I felt it helped solidify the Celestial Being Gundams as an actual team and everyone really has their part to play; reinforcing each of the distinct characters that pilot each Gundam.

However, I wouldn’t call each character’s personality deep, as each of them only really has one thing pushing them forward in their resolve to be a part of Celestial Being. Central lead Setsuna F Seiei is a typical stoic hero who is focused on becoming a symbol of justice, while Lockon Stratos is often seen as his dependable sidekick, although his main reason for being in Celestial Being is to get revenge on the terrorists that killed his family. Allelujah Haptism seems far too nice on the surface, but has a dark hidden past that caused him to end up at Celestial Being and Tieria Erde, perhaps the weakest of the four characters, sees himself as being more important than he actually is, which may prove to be a fatal flaw. While I didn’t dislike any of the main cast, I simply found them uninteresting apart from maybe Allelujah who remains a bit of an enigma for a good two-thirds of the show, and I think it’s a shame that a lot of the side characters and enemy fighters feel more compelling than the Gundam pilots do. 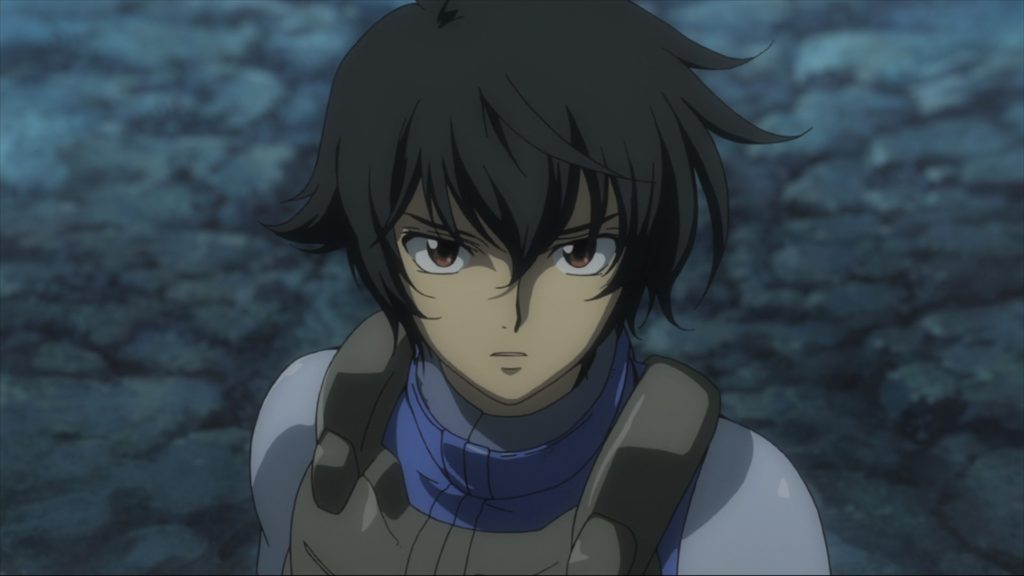 This isn’t helped by some wooden and very literal dialogue that doesn’t really get the point across when it matters. For example, Setsuna often claims that he is trying to become a Gundam, which in the way it is said and delivered doesn’t make sense and it was not until later in the series that we realise he’s not actually trying to become a Gundam, but what the Gundam represents.

This is more of a script and direction problem though, as the actual voice acting is fine in both English and Japanese, with my particular favourites in the latter being Hiroyuki Yoshino (Baccano!, My Hero Academia) as Allelujah Haptism, and Keiji Fujiwara (Attack on Titan, Fullmetal Alchemist) as the warmongering Ali al-Saachez. The English cast are less well known in comparison, but older viewers will hopefully at least recognise Brad Swaile of Light Yagami fame voicing Setsuna. 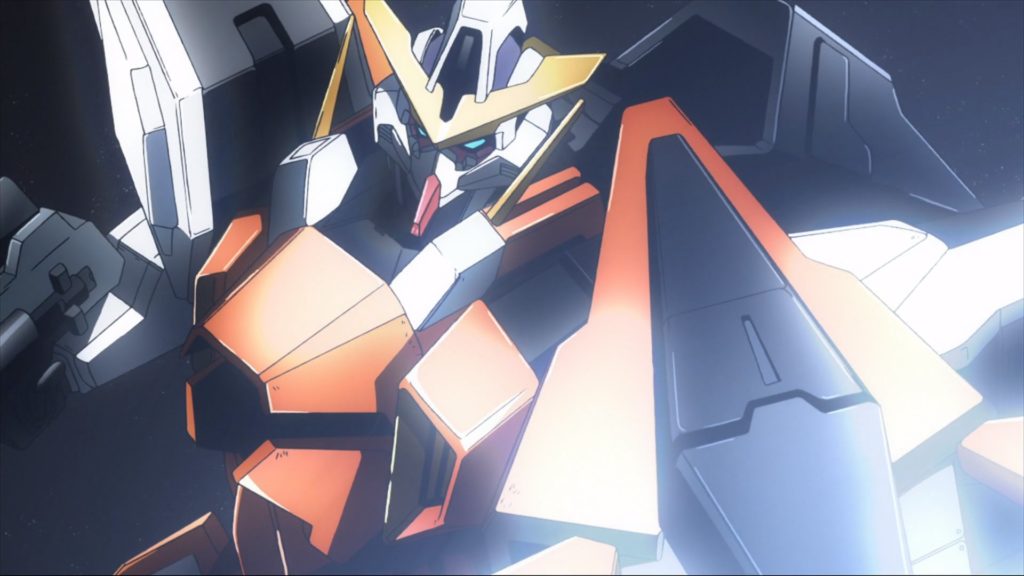 The music is composed by the legendary Kenji Kawai, perhaps best known for his soundtrack to the original Ghost in the Shell, and he applies himself well to the Gundam franchise here, creating pieces that carry a very classic 80s sci-fi sound. The series also has a great set of theme songs, with my personal favourite being the second opening, “Ash Like Snow” by The Brilliant Green.

This release from Anime Limited is the same as the US release, featuring Episodes 1-25, clean opening and endings, audio commentaries for Episodes 17, 21 and 25, a series trailer, and a humorous preview for the second season in the form of a short flash animation. I had no real issues with the quality of the package; however, I did find the Blu-ray menus slightly confusing to navigate in the way they’ve coloured which option is selected, and I feel it could have been a bit clearer, especially for the language selection. 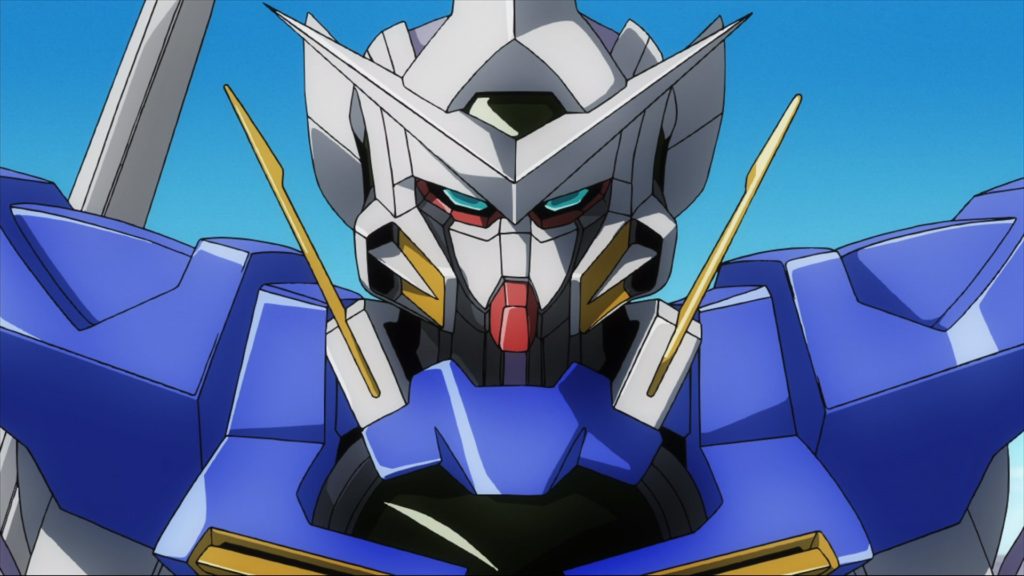 Overall, the first season of Mobile Suit Gundam 00 offers a deep, politically-focused mecha series that reflects many real world issues of its time, balancing it well with some great action sequences. While the political issues can be confusing at first, the show offers plenty of intrigue and machinations to pull you along, although I wish that the main characters were more compelling and there was some better dialogue than “I am a Gundam”. 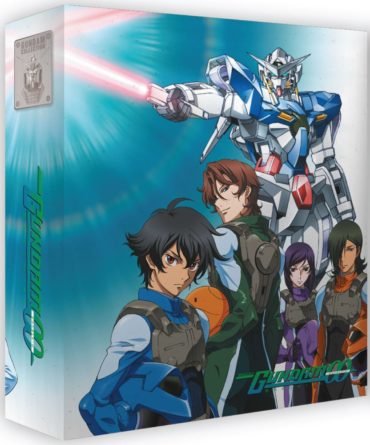