Welcome to the anime with the single most inaccurate theme song. The above quote is the opening line to Gundam ZZ (Double Zeta), which is very definitely an anime. Also, it’s set in the future, so my guess is that what is depicted isn’t going to be true. However, I am told by another AUKN reviewer that the reason this song came about was because creator Yoshiyuki Tomino was responding to fans who claimed that Gundam wasn’t an anime but something more serious in comparison with other mecha series at the time.

After listening to the theme song for the first time, the viewer discovers that the first episode is primarily a recap of the events of the original Gundam and Zeta Gundam, as well as a taste of ZZ. However, it uses unrestored footage and so it isn’t an easy or indeed required watch. Fortunately the rest of the series does use restored film.

ZZ begins directly after the events of Zeta Gundam. The Argama, captained by Bright Noa, docks into Side 1 following a fearsome battle which has left the pilot of the Zeta Gundam, Kamille Biden, in a state of severe shock, with him being unable to move or speak. One of the people living in Side 1 is Judau Ashta, a boy who, rather than attending school, spends his days working as a scrap metal dealer, saving up to give his little sister Leina a good education. 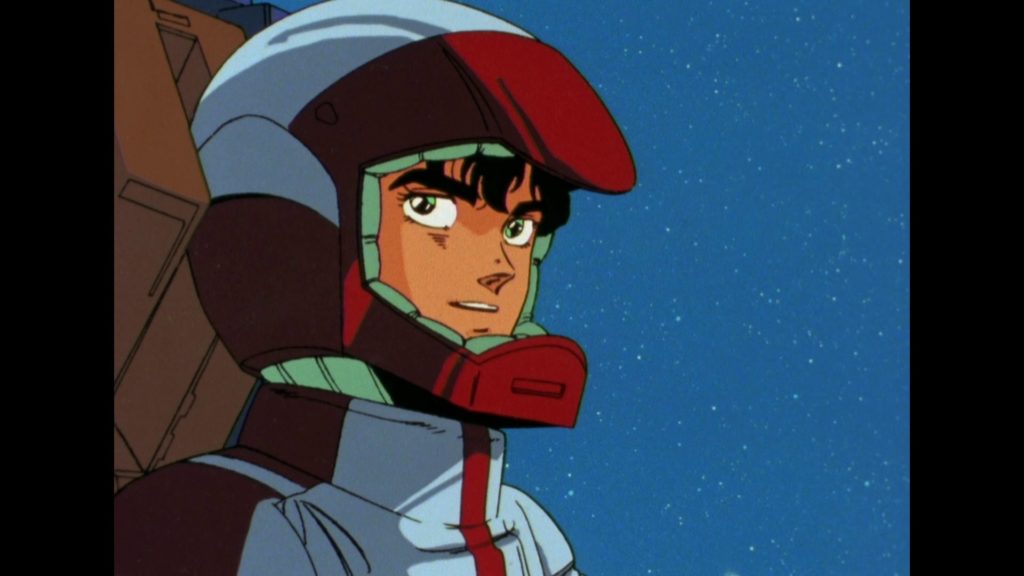 While working, he finds an escape pod that has in it one of the Titan soldiers, Yazan Gable. Yazan decides to use Judau and his friends to steal the Zeta Gundam from the Anti-Earth Union Group, but while Yazan wants to use it to fight, Judau just wants to sell it. When they try to steal it and see how violent Yazan is, Judau grabs the mobile suit for himself and defeats him, and later manages to escape with his friends.

Later a ship from Axis Zeon docks into Side 1, captained by the rather elegant Mashymre Cello, who is always seen wearing a rose given to him by Zeon’s leader Haman. The first collection of episodes follows the attempts of Judau, Yazan and Mashymre to take the Zeta Gundam for themselves. As they do, we begin to see signs that Judau is a Newtype. Eventually, Judau, Leina and their friends become members of the Argama.

While in space the crew of the Argama are helped by a woman named Roux Louka, originally from the La Vie en Rose. With her help as well as that from his friends, Judau becomes the pilot of an even stronger mobile suit, the “Double Zeta” or “ZZ Gundam”, with Roux piloting the Zeta Gundam. 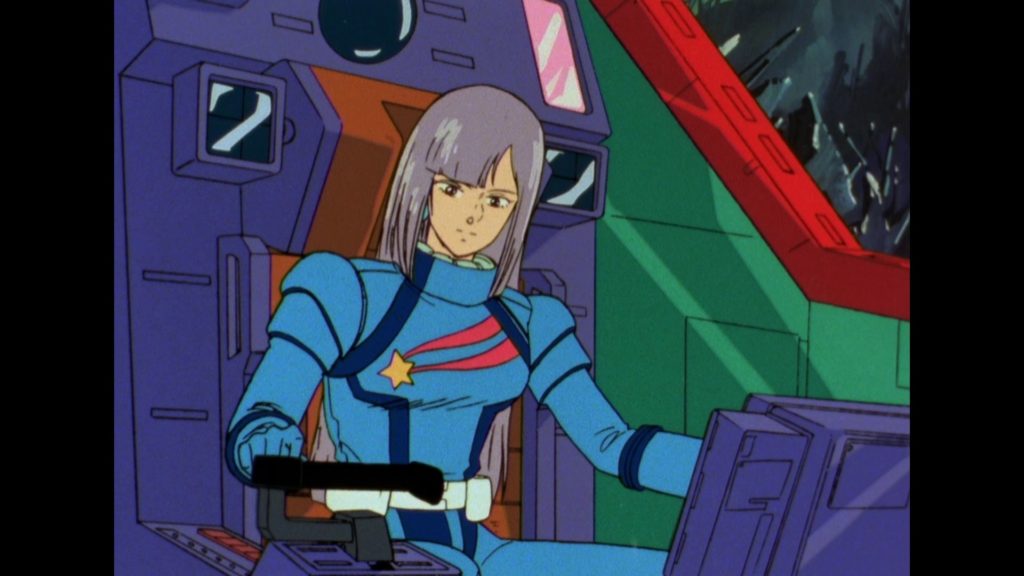 However, one of the Zeon soldiers, Glemy Toto, falls in love with Roux and tries to kidnap her in the heat of one battle. Instead though, he mistakenly kidnaps Leina. This act forms the main motivation of the series, with Judau coming up with various extreme methods to rescue his sister, facing trouble from both Zeon and his superiors.

Much of the comments concerning the first half of ZZ Gundam are that it is more light-hearted than most of the series, and while there are some comic moments like in Judau’s first attempt to steal the Zeta Gundam by throwing oranges at people, there is still plenty of seriousness and there is always one big fight in every episode. The series does start slowly, and the unrestored opening episode doesn’t help things, but when Leina is kidnapped it makes for a more interesting story, giving Judau something to fight for. As with Zeta Gundam, you feel that the second half of the series is going to be the more exciting one because that is where the real battle begins.

One other sticking point that this collection has is that there has been a considerable change in the cast. Kamille has no speaking part, and neither Char Aznable nor Amuro Ray appear outside of the first episode. Aside from Noa, Haman, Kamille and Yazan, the main returning characters to appear so far are Kamille’s girlfriend Fa, Wong Lee, the children Shinta and Qum, and Haro the ball-shaped robot. As the series progresses, there is less to connect you back to the original show. 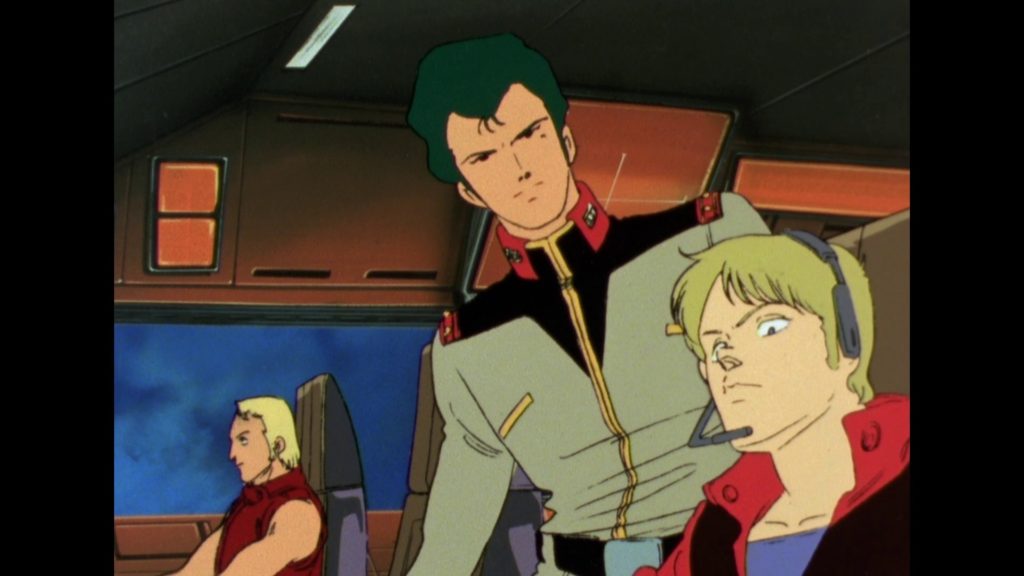 In terms of extras, the collection comes with a box to house both this and the forthcoming second volume, while on the discs we have the textless opening and closing, so you can hear Masato Arai’s paradoxical opening song as often as you like, as well as TV spots. However, there is no English dub to this collection. You can only listen to the Japanese dub, with a choice of either English or French subtitles.

While this series does have some exciting moments, there are many times that it seems to drag. You get the feeling that rather than ZZ it should be zzz…, but that is probably being harsh. Best to see the second part in order get a full view of the show. 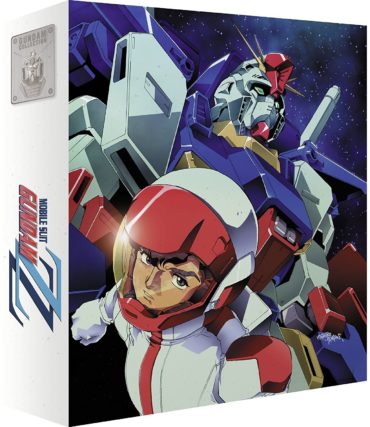