Two years on from the battle of Edmonton and fulfilling their mission to get Kudelia Aina Bernstein to Earth in order to secure the de-regulation of half-metal, Tekkadan stand as victorious heroes. Now a full member of Teiwaz, they have been able to secure enough money to spread themselves out over both Mars and Earth, while their funding of Kudelia’s newly formed Admoss Company has enabled the building of both a school and an orphanage for the red planet’s impoverished children. 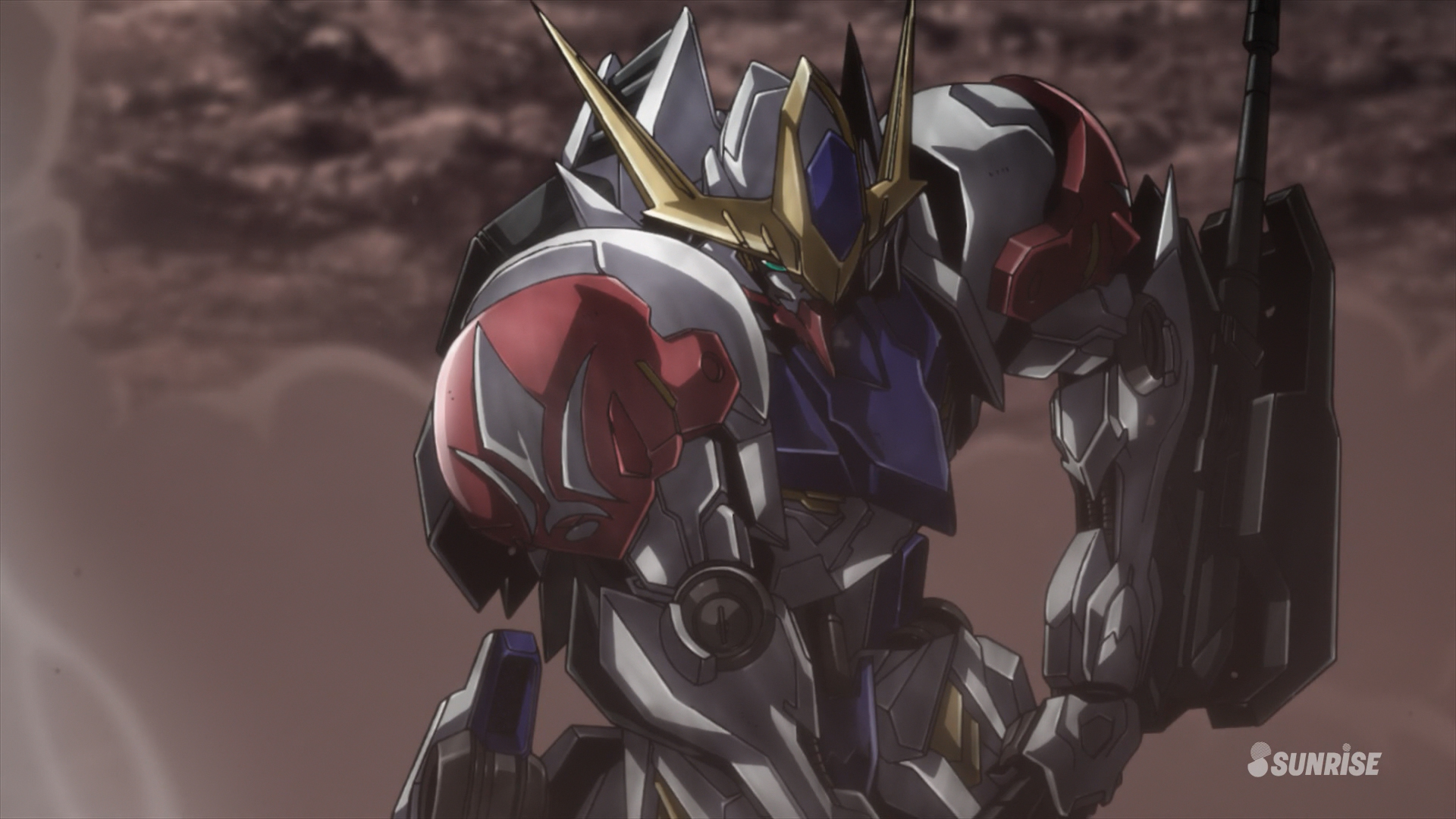 However, their actions have had unintended consequences elsewhere, as the erosion of Gjallarhorn’s authority has seen the rise of both terrorism and piracy, while tensions between Earth’s three economic blocks are at the highest they have been since the Calamity War. With the organisation’s corruption now exposed, McGillis Fareed sees this is an opportunity to wrangle Gjallarhorn away from the seven controlling families and take full control of the organisation, yet to do that he has to face off against the tactical genius of the scheming Rustal Ellion. As the power struggle between these two men eventually leads to proxy wars and other conflicts, Tekkadan find themselves ensnared in a deadly trap, as Rustal uses his influence to manipulate both Teiwaz and Gjallarhorn to dance in the palm of his hand. Will our heroes be able to survive, or are they doomed to fall? 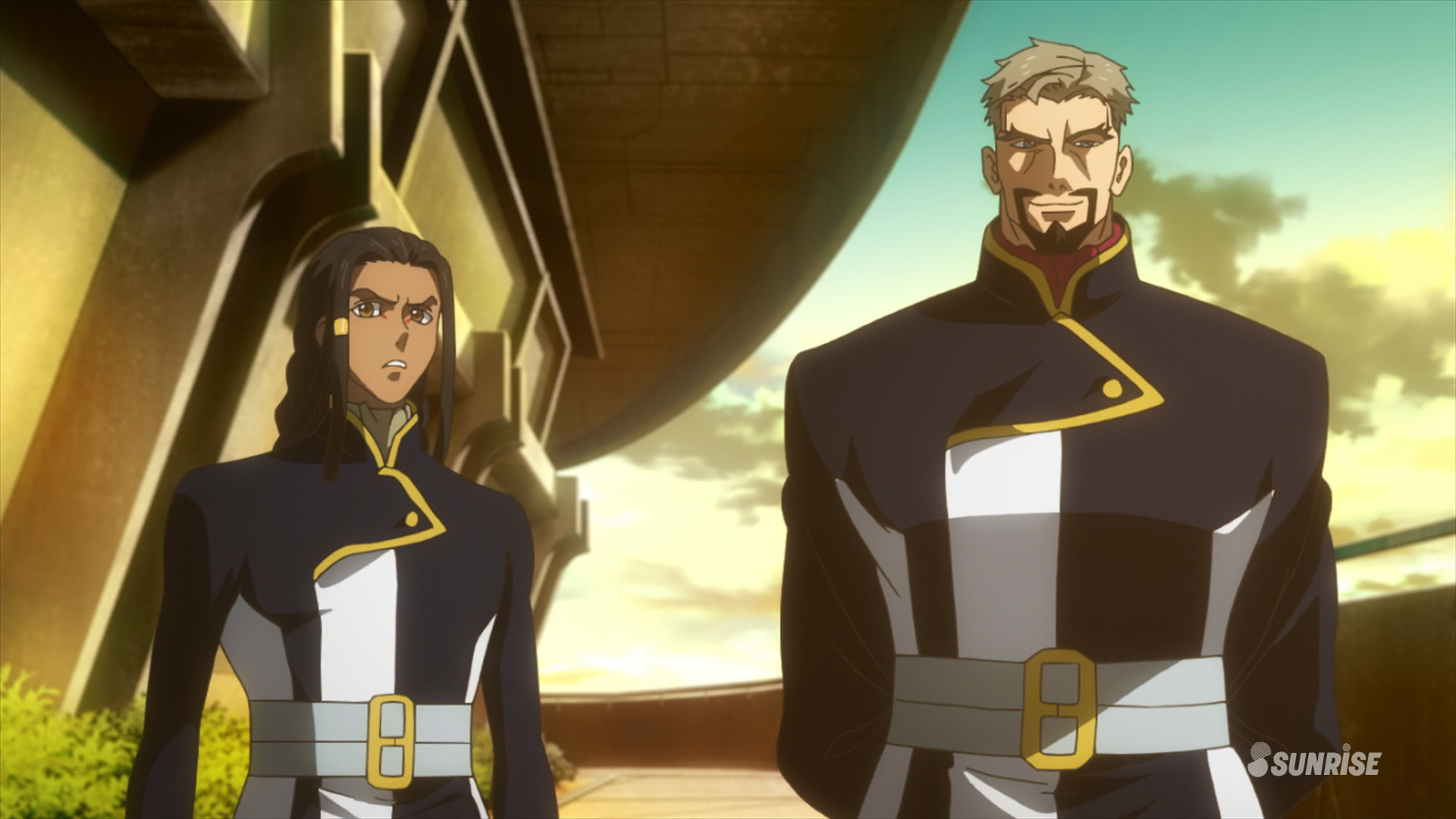 This second half of Mobile Suit Gundam: Iron-Blooded Orphans is a rollercoaster ride into hell, as it drops a lot of the drama and politics for high-octane battles that make it feel a lot more like a more typical Gundam series compared to its first half. While it still retains some of the drama and politics, they certainly don’t seem to be as effective, as it moves things away from showcasing the humanitarian subtext of people being oppressed, to this simpler power struggle.

From a pure entertainment point of view, this actually works in its favour, as it allows the show to focus on its fantastic action sequences. If the drama is the slow climb up, then these are the exhilarating rush down to the bottom, being frenetically paced and utterly brutal to watch. While I found the first part’s physical combat to be lacking in spectacle, particularly in comparison to the franchise’s traditional laser beam-based fights, they have managed to overcome that here as the mobile suits dance elaborately on the battlefield and punch and kick their way through hordes of enemies. 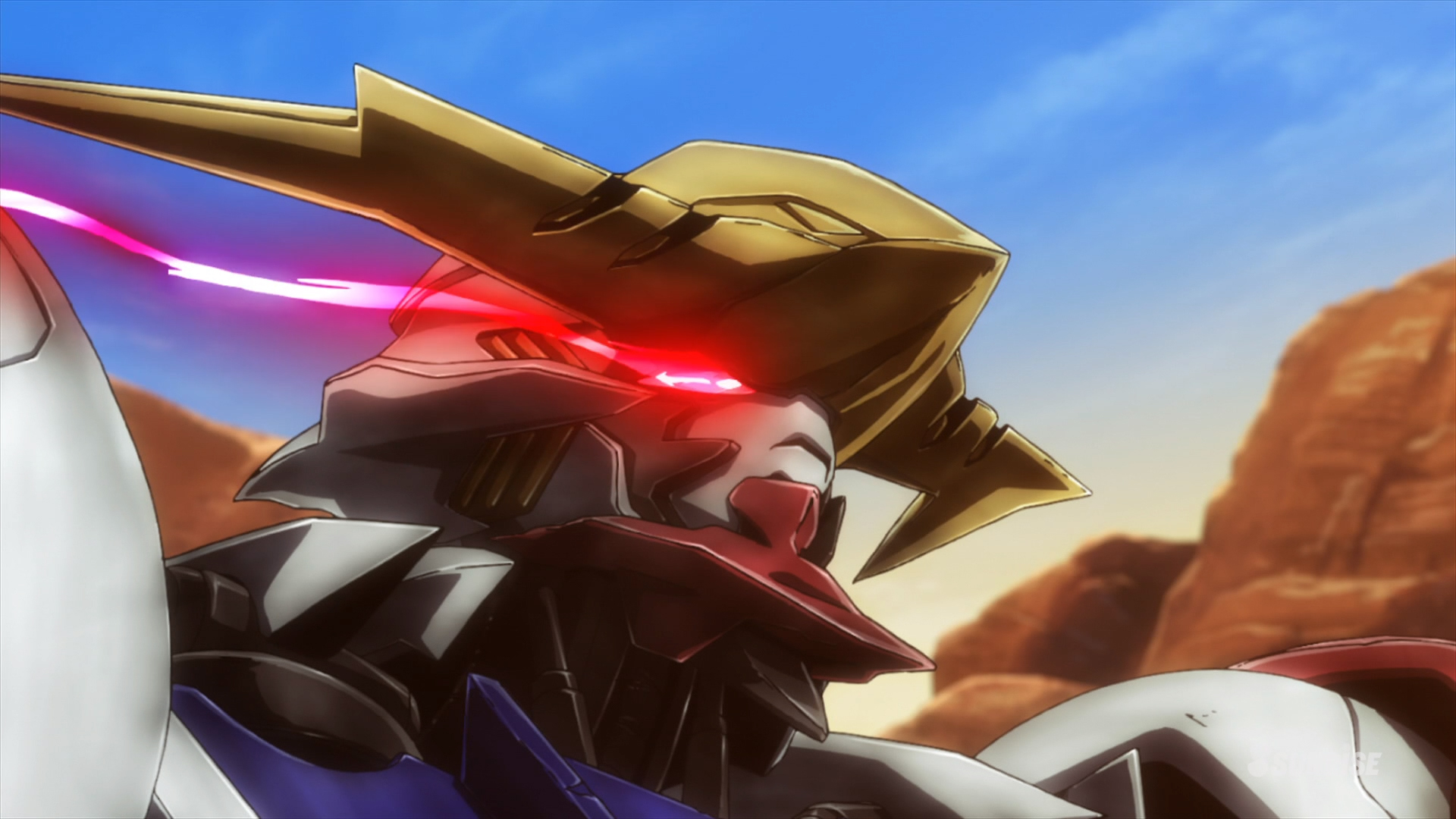 It helps that the mobile suits themselves have had a clear upgrade, and feature more distinct designs and variety, whether that’s the Gundam Frames themselves or the standard grunt units. The Gundam Frames in particular look like utter beasts and they really light things up whenever they appear, while one unit in particular that may be familiar to Gundam veterans also gets a terrifyingly good reimagining, which makes them feel like a vicious threat, holding the power to slaughter humanity.

Speaking of which, the show definitely isn’t afraid of killing off its characters, with the series boasting a very high body count by the end. While the grunts are very much expendable, every named character’s death means something and helps drive the story forward. It also treats them with a lot of care and respect, in a way that on both sides of the conflict, each major death has a meaning or a purpose, and you can empathise with the rest of the cast as you can really feel their impact. 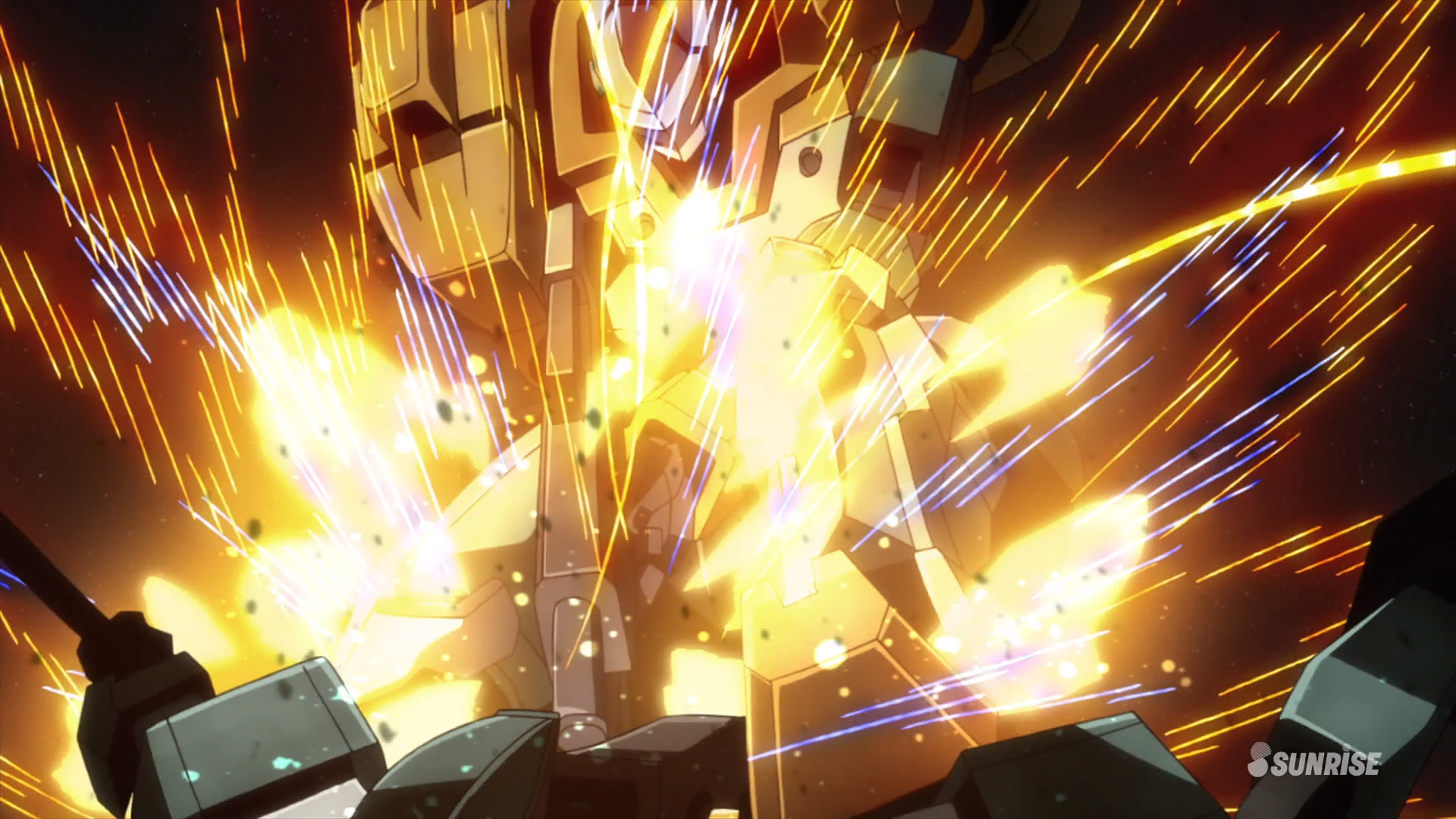 This speaks a lot for the quality of Mari Okada’s script and how the characters develop over the course of the series, using both the action and the downtime in between battles to explore and flesh out certain characters. While Orga and Mikazuki are still the leads, it’s pleasing to see the younger characters get a lot of development too, with the likes of Takaki and Ride really coming into their own, alongside newcomers such as Mikazuki’s upstart rival Hush. The romantic developments in this half are a lot better too, as we see different members of this one big family bond in different ways, exploring more of Okada’s family-based themes. I’d say that the love triangle between Mikazuki, Atra and Kudelia still feels a bit awkward, but I think this is more my distaste for Atra’s tendency to push her feelings onto others rather than anything else. The other pairings I thought worked really well, with some cute moments with each couple, and I’ll give it props for meaningfully including a gay character and being respectful about it. 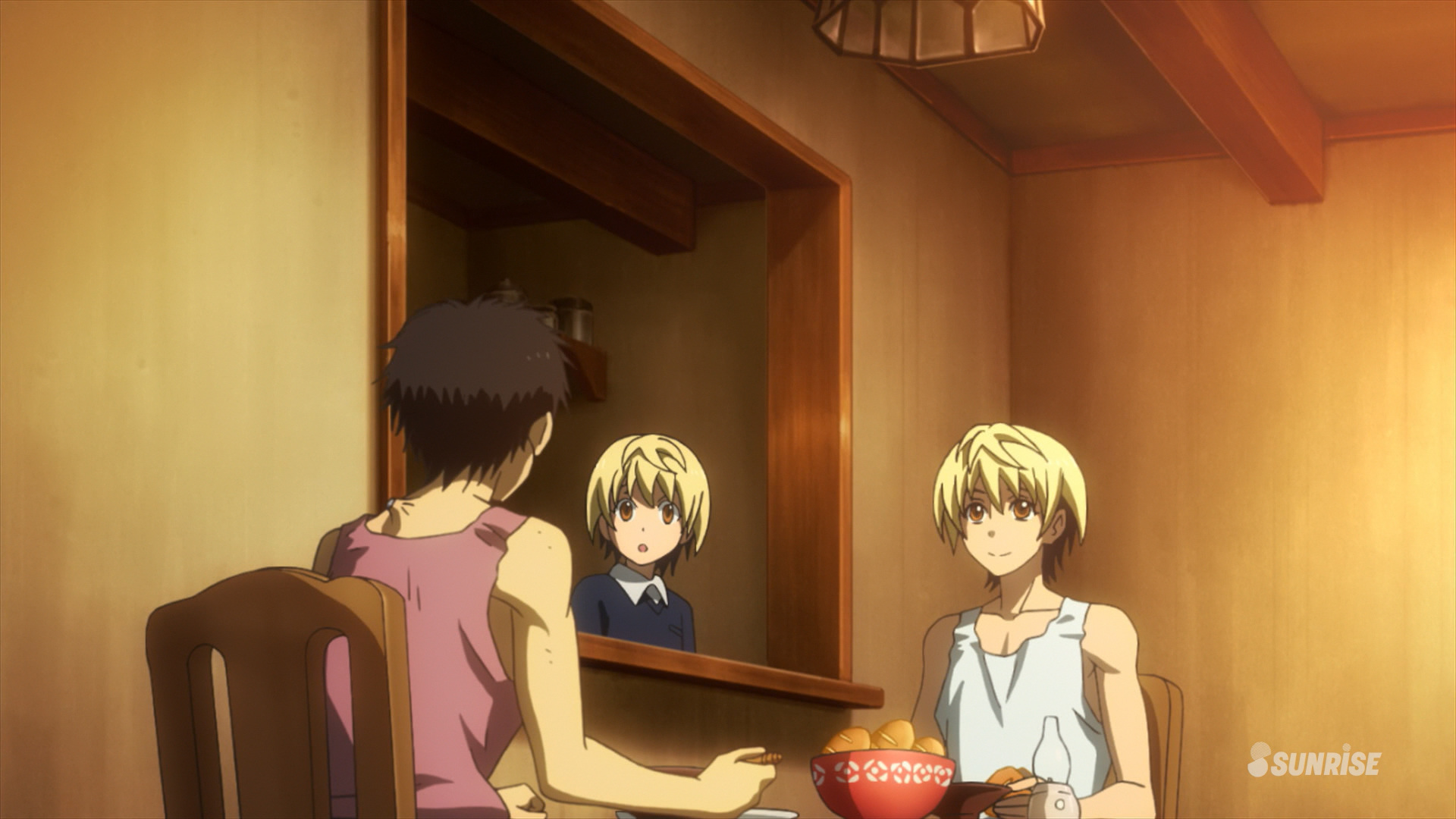 With the focus on the action sequences, Sunrise gets to show off a lot with the animation, particularly in the couple of really key battles in the series where Barbatos gets involved and it goes into its powerful overdrive mode. It’s a shame they couldn’t do the same for the other Gundam Frames though, as with Barbatos being the face of the series, it ends up taking all the glory and a lot of the animation budget too.

Masaru Yokoyama’s soundtrack remains really strong, and has some nice variations on the show’s common themes in this second half that reflect the tone of each scene as the mood takes a much darker turn. The sorrowful motif that accompanies Tekkadan through this run is used for some great foreshadowing, while the slower pieces work great in playing with your emotions as key characters slowly but surely get killed off. I also liked the sound effects that are slowly added to Barbatos as it is upgraded, becoming more and more of its own animal over time. The opening themes, “RAGE OF DUST” by SPYAIR and “Fighter” by KANA-BOON, aren’t as iconic as the first season’s openings, but are still suitably punchy rock songs. Meanwhile, the second ending, “Freesia” by Uru, is a charming ballad that matches the tone of the series, yet the first ending, “Shonen no Hate” by GRANRODEO (a band I’m not particularly fond of, if I’m being honest) is largely forgettable. 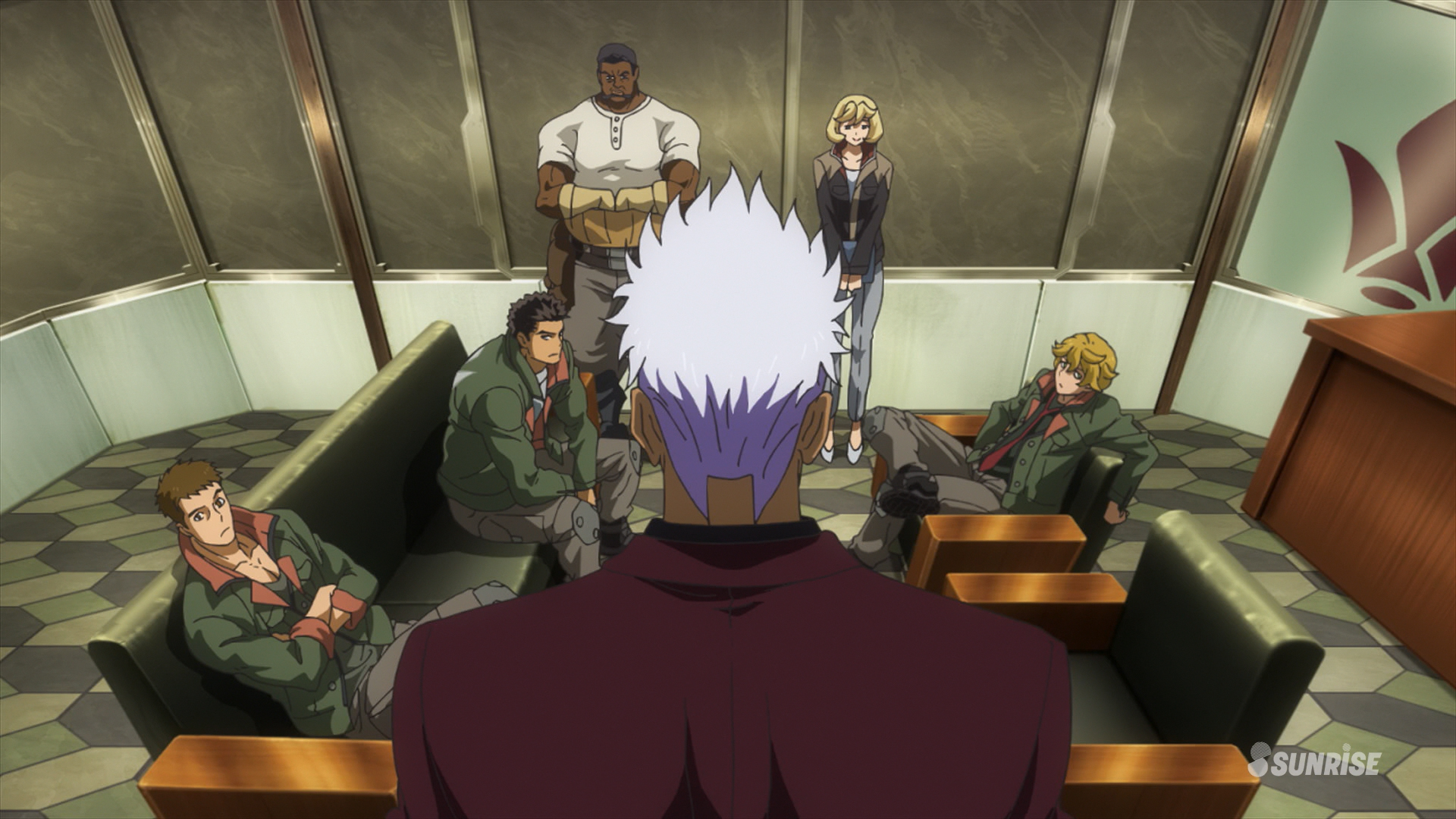 Anime Limited’s release features Episodes 26 to 50 in both subtitled Japanese and the English dub. The Japanese language version continues its strong form, although the subtitles can feel a little awkward in places or are either out of position or missing punctuation. Unfortunately, the English dub shows no improvement and suffers from the same problems I mentioned in my review of Part 1, with poor delivery and pronunciation. In terms of extras, the collector’s edition comes with a bonus 44-page booklet, while you’ll find clean opening and ending themes and trailers for other series on Discs 2 and 4. 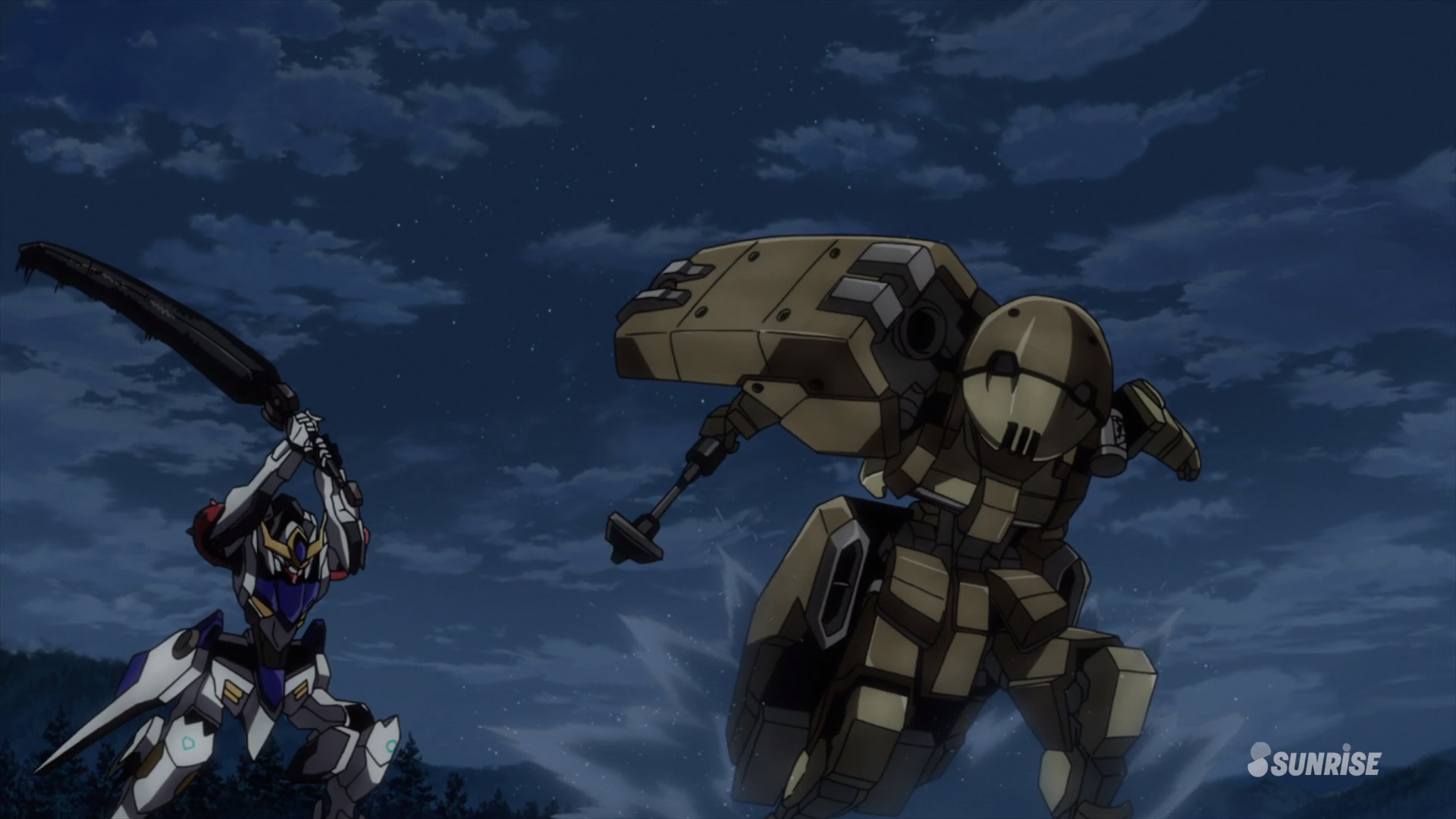 Overall, the second part of Mobile Suit Gundam: Iron-Blooded Orphans cements the series as one of the strongest entries in the Gundam franchise thanks to its heavy, no holding-back action sequences, and its strong, tight-knit cast of characters that you really get attached to. While it may lack the finesse of the first part’s drama and plot development, it still delivers a mecha show that series fans will enjoy, and works exceptionally well for newcomers. 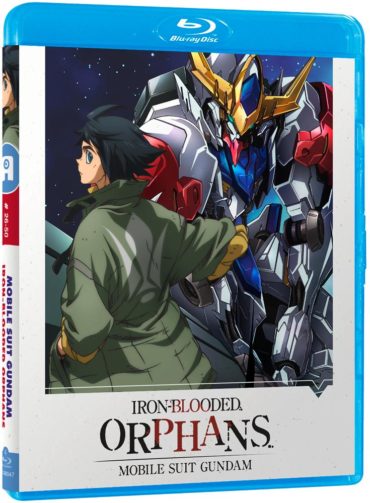