Director and writer Hiroyuki Imaishi and Kazuki Nakashima are best known for working together on Gurren Lagann and Kill la Kill, the latter of which being a firm favourite among fans of Studio Trigger. This year the two have reunited to create Promare, a film co-produced by Studio Trigger and XFLAG, but does it tap into the same magic as Imaishi and Nakashima’s other works?

The story takes place thirty years after Earth suffered a great calamity known as the Great World Blaze, which saw humans spontaneously combust,  thus killing half of the world’s population. In the present, there are people with the ability to control flames, known as the Burnish. Thanks to a terrorist group known as the Mad Burnish, the Burnish are discriminated against and branded a danger to mankind. 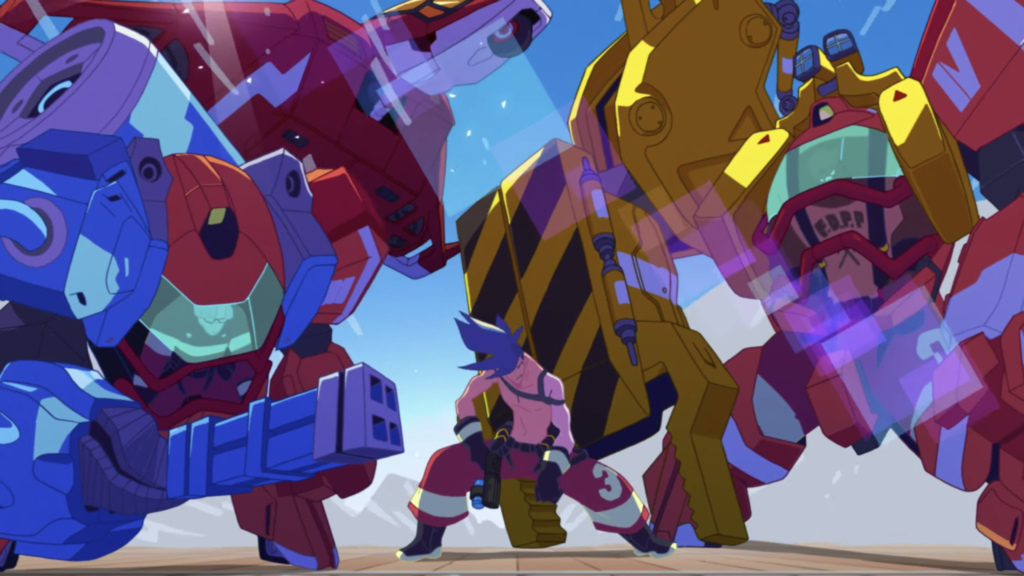 The hero of this particular story is Galo Thymos, the newest member of the Burning Rescue team (a firefighter team) in the city of Promepolis. While attending a fierce fire, Galo goes up against the last three wanted members of the Mad Burnish. Little does he know that this encounter will change the fate of the world forever…

Galo successfully defeats the Mad Burnish and is labelled a hero by the town, but when a friend working at the local pizza restaurant favoured by the Burning Rescues squad is taken into custody for being a Burnish, he begins to wonder if he did the right thing. Shortly after, he comes face-to-face with the leader of the Mad Burnish (Lio Fotia), once more after his group manages to break free of their captors. Lio tells Galo that the Burnish are being experimented on by Kray Foresight the Promepolis city mayor and that he’s only trying to save his friends’ lives, but Galo struggles to believe his idol could be part of such a horrible act. Torn between standing up for the Burnish and doubting Kray, Galo is left confused and vulnerable but fate has no intentions of giving him time to sort his feelings out! 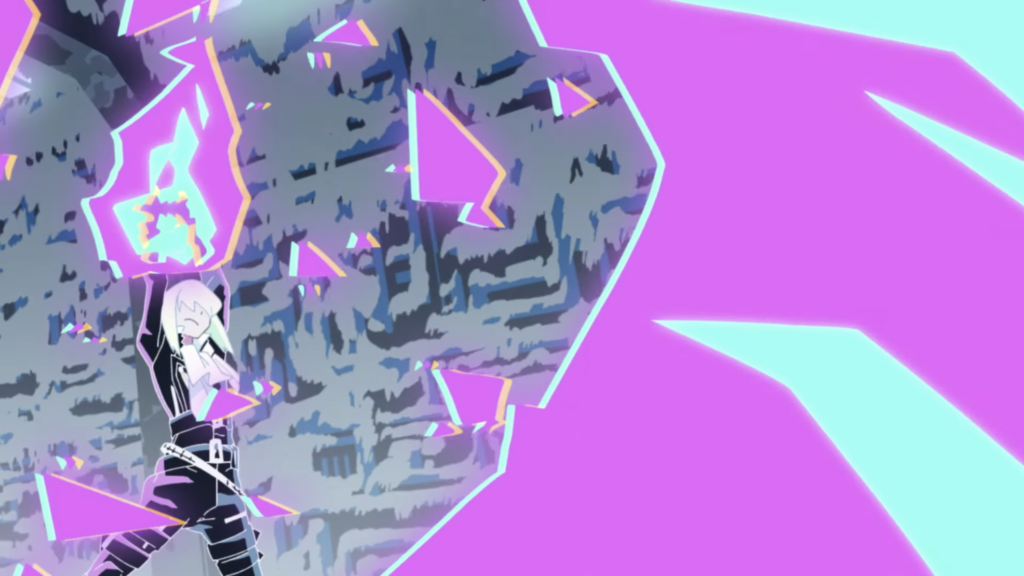 From start to finish, Promare is constantly upping the ante and takes great pride in making things as insane as possible before reaching its thrilling conclusion. I’ve seen this movie twice now and not once did I feel it lost its way in much the same way Kill la Kill never does. There is always a lot happening, but the story is easy to follow and the characters are likeable. Most importantly, Promare doesn’t take itself seriously and leans into being pure fun.

As far as the cast go, Galo is boastful, optimistic and what I lovingly term a great big idiot. He’s your typical shonen protagonist with all the stupid, bold personality you expect but only in the best possible ways. He’s the source of most of the humour of the film and that’s fine, he’s a great lead. 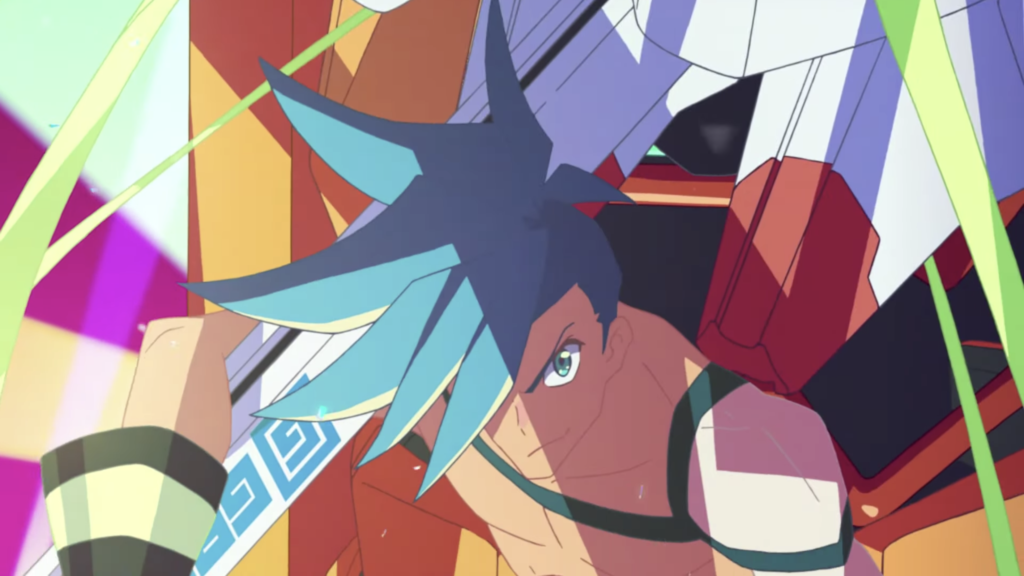 Equally entertaining is Lio, who begins as the antagonist but is quickly shifted into the role of kind-of friend to Galo. He’s younger than Galo and is more quiet and level-headed, but he won’t stand by and let his companions be harmed. His temperament is in perfect contrast to Galo and the two characters work together very well.

Although Galo and Lio spend the most time in the spotlight, the extended cast are all great as well. While some of the members of the Burning Rescue squad did seem stereotypical characters of Trigger’s, they’re all entertaining enough where I can happily let that pass. As a fan of the studio’s works, I can’t say I wasn’t pleased to see some similar personalities here, given how uniquely ‘Trigger’ they are. 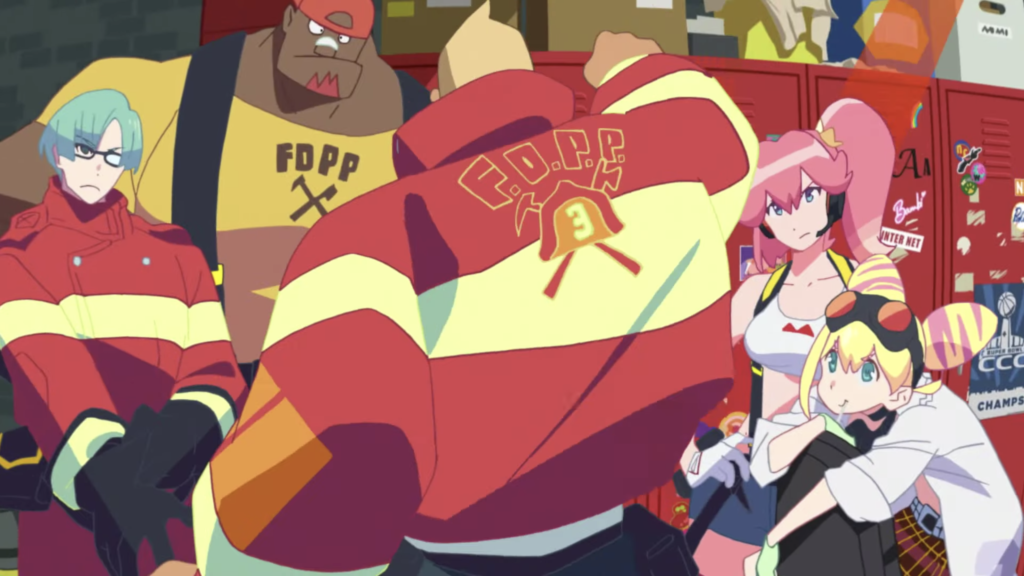 After the first time, I saw Promare I knew I loved it, but I couldn’t quite put my finger on why. Even after my second viewing my affections hadn’t dimmed at all, but I still don’t understand why. Perhaps there doesn’t need to be a well-thought-out reason because ultimately Promare is just nonstop fun and that’s perfectly fine. It never stops for breath, leaping from one thing to the next and that prevents it ever becoming boring, even on repeated viewings. The sheer adrenaline of the story pulls you along as everything gets increasingly more hectic until you can’t help but find you’ve spent the whole runtime with a big grin on your face.

The animation for the film has been handled by Studio Trigger and XFLAG. Initially, the art style takes some getting used to – it’s heavily CGI and very obviously so. However, as the movie goes on, it becomes clear that this was the best choice and has allowed the team to create a beautiful work with some incredible scenes the likes of which we wouldn’t see from anyone but this studio. It’s bright, colourful, stunning and very unique. It’s hard to describe because there is nothing else quite like it, so just trust me when I say it’s a real feast for the eyes. Of course, this is without even touching on the action scenes which are captivating to watch and honestly some of the best fights I have ever seen. I never thought I’d call CGI in anime good, but oh boy was I proven wrong with this one! 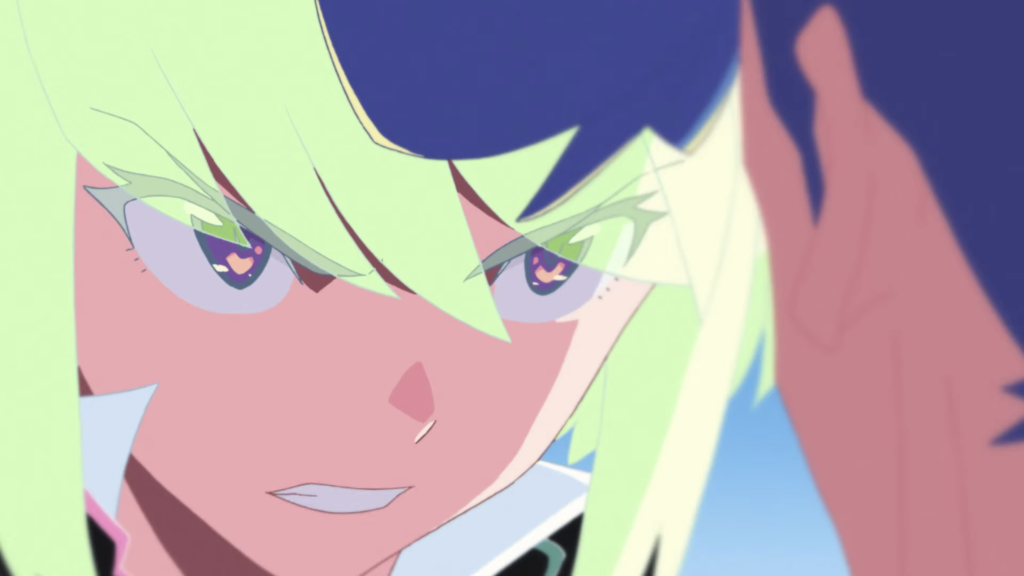 Music for Promare has been composed by Hiroyuki Sawano (Attack on Titan, Aldnoah.Zero, Kill la Kill) and the soundtrack is very catchy. It works hand-in-hand with the animation to bring the world and battles to life. Fans of Sawano’s works will be able to tell straightaway that these tracks have been created by him. Even if you aren’t a fan, you’ll undoubtedly have the opening theme, ‘Inferno’, stuck in your head for quite some time after hearing it.

Finally, let’s talk about voice actors. Earlier I mentioned how Galo and Lio play off one another well and that’s in part thanks to their wonderful voice actors. Galo is played by Kenichi Matsuyama (no other notable anime roles), who gives him the dorky, constantly chipper personality that the role demands. Meanwhile, Lio is handled by Taichi Saotome (also no other notable anime roles), who gives the character a very gender-neutral and soft voice, which suits his design and overall attitude.

Overall Promare is a film not to be missed. There is nothing quite like it out there, certainly nothing which is so much fun for the entire runtime. Hiroyuki Imaishi and Kazuki Nakashima have once again created something truly unforgettable which will be a joy to watch for many years to come. 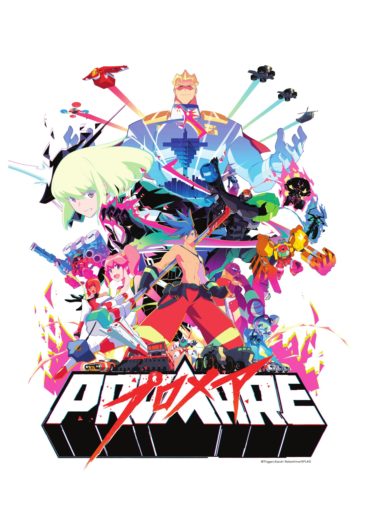