Taking place in an alternate history to our own, the world has been split into three major superpowers with the Holy Britannian Empire holding the Americas, Europa United covering Europe, Africa and Russia, and the Chinese Federation controlling most of Asia. The power balance in this world, however, is tipped firmly to the West, with the Britannian Empire constantly expanding its territory with its superior military while the rest of the world watches on. 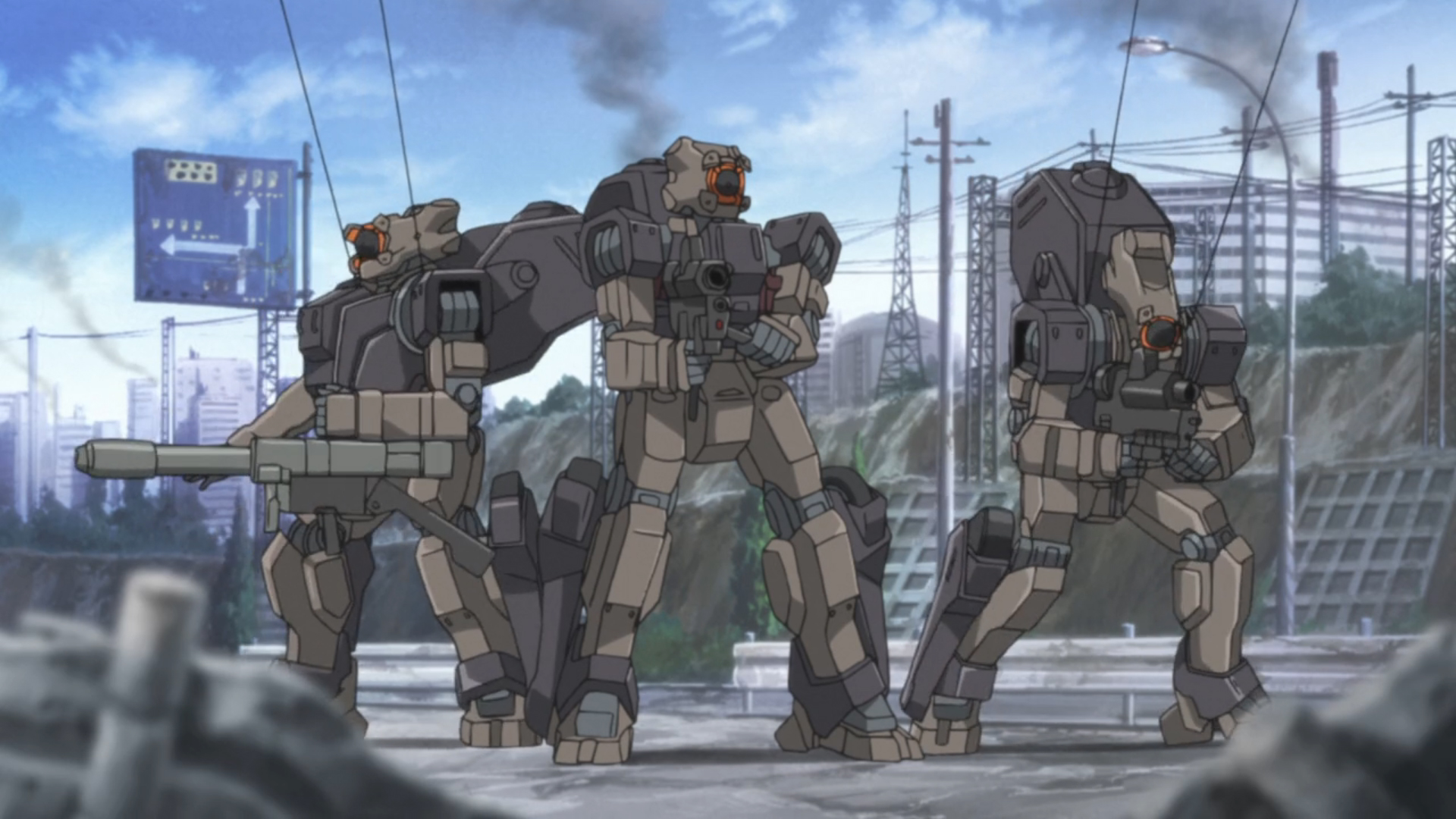 The series’ protagonist, Lelouch vi Britannia, is born into this nation as the eleventh prince, son of Emperor Charles and his consort Marianne. While Lelouch is still a young child, his mother is assassinated in front of him and his younger sister Nunally, who becomes blind and unable to walk with the shock of the attack. Outraged, the young Lelouch demands answers from his father, but is instead rebuffed, and is sent with his sister to become political pawns against Japan: the next country on Britannia’s hit list. The Empire quickly invades, renames it Area 11 and segregates the people of Japan, stripping their national identity and renaming them Elevens.

Several years later, Lelouch, now going by the name Lelouch Lamperouge, is living an ordinary life, attending high school in Tokyo at Ashford Academy, while caring for Nunally. After becoming involved in a terrorist attack on his way back to school after an underground chess match, Lelouch tries to rescue a young woman he finds secured in a steel canister placed in a truck that was thought to be carrying poison gas. Under fire from soldiers who had been ordered to clear out the ghetto in which the terrorists were presumed to be hiding, the woman, calling herself C.C. (pronounced C2) gives Lelouch the power of Geass, which allows him to command anyone to do anything he wants through direct eye contact. Using this power, Lelouch gathers up the resistance forces operating in the country, and begins a grand game of chess against his family and the Empire, seeking revenge for his mother’s death, and wanting to create a peaceful world his sister can live in. 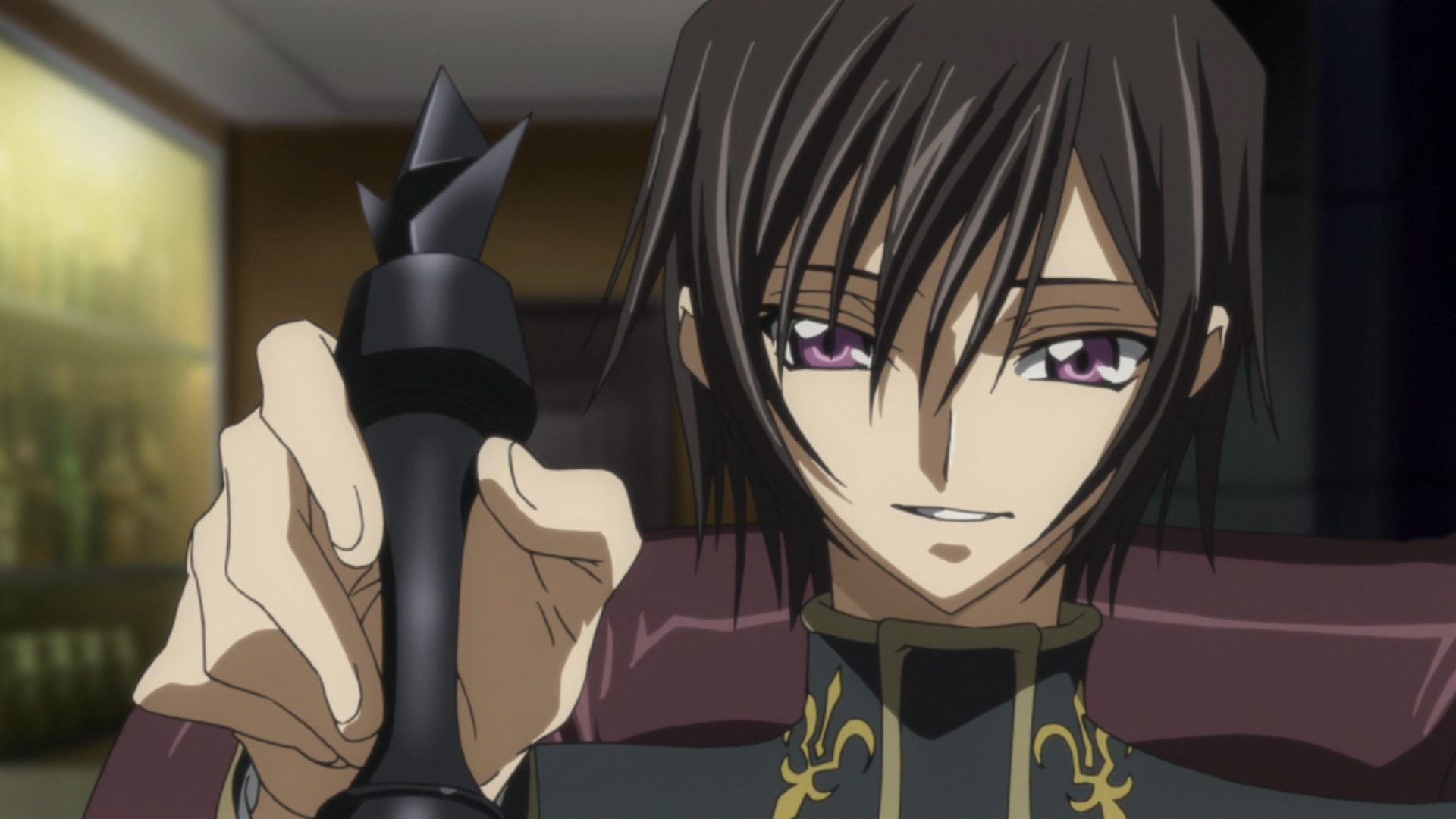 Code Geass is often described as a rollercoaster ride, and I can say that the places it goes with its story and characters are, quite frankly, nuts – dripping in tension and a sense of craziness, while still being very compelling. At the same time, its shocking depictions of racial segregation and genocide offer a stark damnation of war and oppression in perhaps a hope that these horrors of the past don’t keep repeating themselves in the real world.

While there is some serious stuff going on here, as the Japanese fight against the Britannians for independence, the show is immensely fun to watch thanks to how over-the-top it is, and this mostly comes from Lelouch himself. Under his guise as the terrorist and leader of the Black Knights, Zero, Lelouch gave me an anti-hero that I haven’t cackled at so intensely since the likes of Light in Death Note, with the tone of his character taken to the extreme exaggeration of authoritative and commanding. Without the mask, however, Lelouch is a genuine individual trying to do the right thing, yet he is frail and brittle, with the need to protect his sister and his friends often being his undoing. 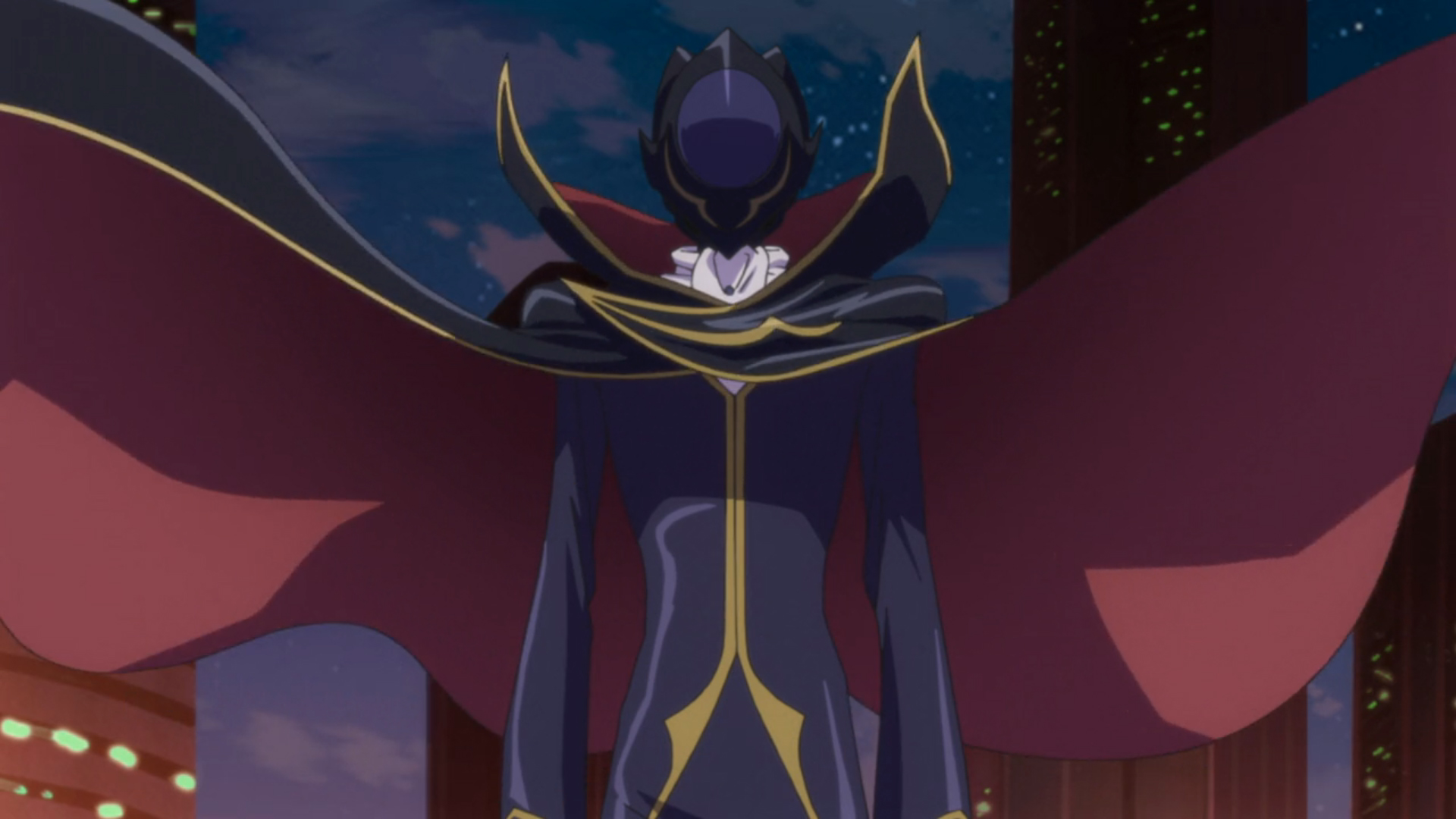 While Lelouch secures a lot of his power through his Geass, I found that I often wasn’t convinced by it, as it frequently feels like a convenient plot device to get him out of tricky situations. Using it feels too easy, and I preferred moments where he couldn’t rely on it as that’s where he was most dangerous and desperate. There’s quite a bit of mythology around the Geass power scattered throughout the series, but it, along with C.C., is underutilised and major plot points regarding it often come out of left field. C.C. herself could have been a mesmerising character, but sadly it just feels as if she’s using Lelouch for her own amusement more than anything else.

The rest of the cast is filled with lots of lovable characters that constantly evolve and change over the course of the two seasons, and it’s really fulfilling to see the journeys that take place on both sides of the battlefield. The series does focus more on Lelouch’s close friends, but by scattering them across the Black Knights, the Empire and the school council, we get to see the conflict from a range of different perspectives. Suzaku, Lelouch’s best friend, and Kallen, one of the first rebels that Lelouch meets, are very similar in how their stories deal with their Japanese heritage in a world full of racism: Kallen choosing Japan over her half-Britannian parentage, and Suzaku becoming an honorary Britannian citizen and working within the military to change it from the inside. The show plays the latter off Lelouch’s more revolutionary stance, often pitting the two friends in a battle to see whose ideals are more effective at bringing change. 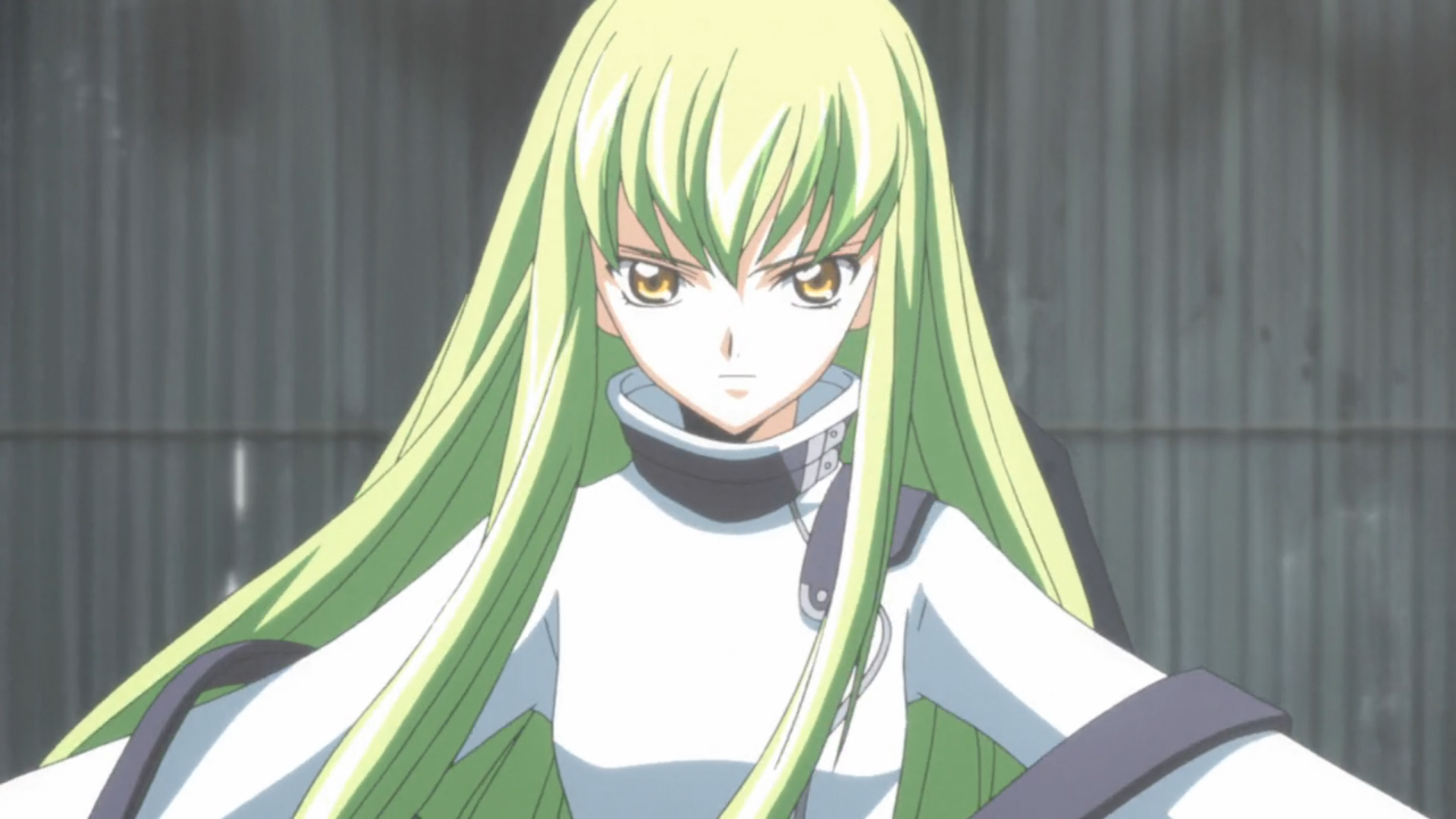 I could go on, as with a cast this large there is a lot to say about each of them, but this does reveal a flaw in that it often feels like there’s so many characters involved that it becomes difficult to follow them all and keep track of all of the changing allegiances. This is particularly felt in the show’s second season, as the war swings from side to side quite rapidly. Even in marathoning both seasons back-to-back, there were characters whose faces I recognised within the Black Knights, but could not remember their names or how they got there.

This is one of the disadvantages of its breakneck pacing, as it leaves little time to properly flesh out many of the characters. There are some lighter episodes that focus more on Lelouch and the members of the school council, which do try to make them more relevant, as well as lightening the tone with some funny filler, but in the grand scheme of things they often work against the show as they pull you out of the action at the most inopportune times, breaking that fast-paced flow. 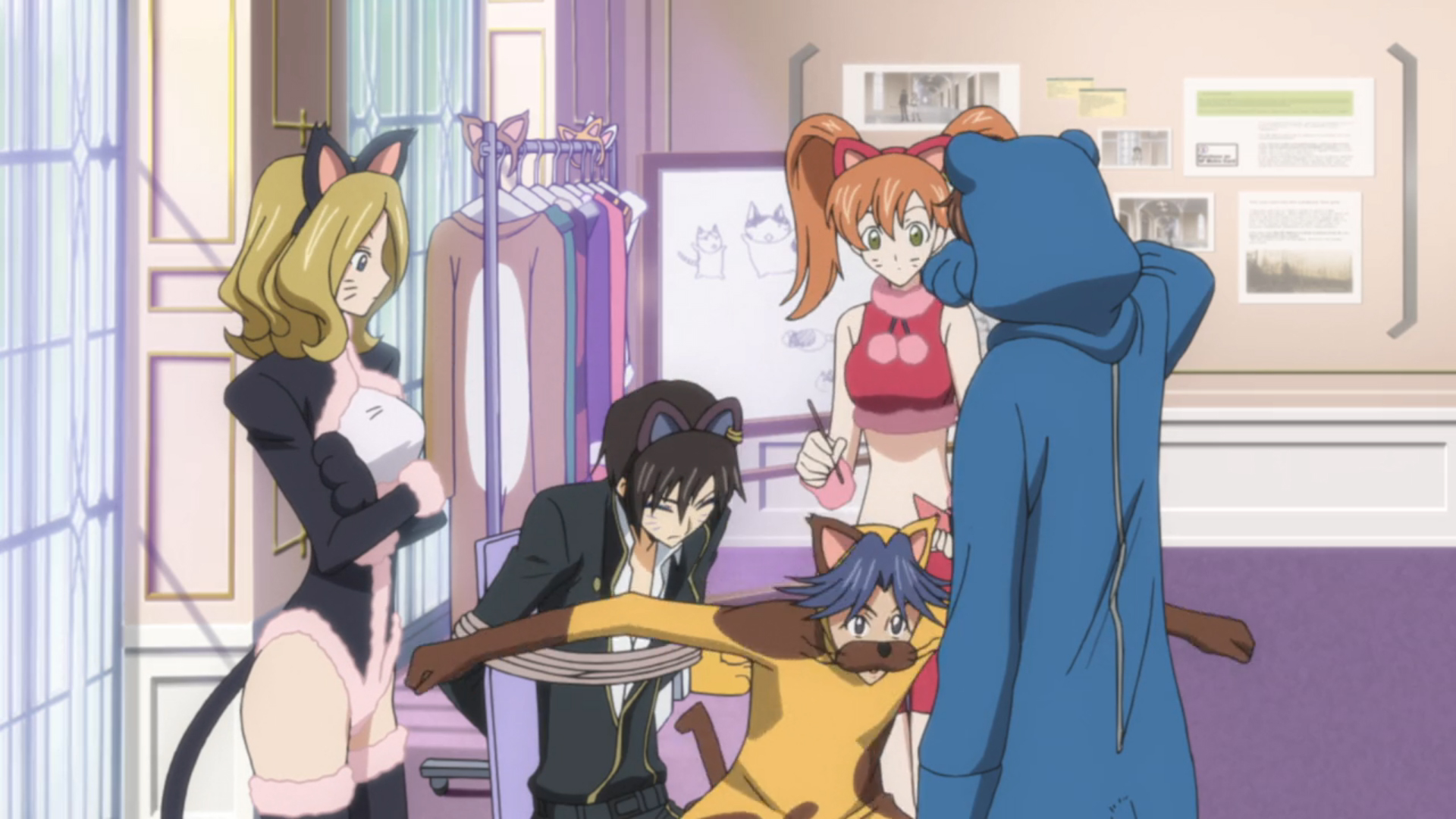 Instead, the pacing works best for the battles, keeping them frantic as the series’ mechs tear into each other. The Knightmare Frames, as they are called, start off quite unique, using foot-like appendages with wheels that allow them to speed along the ground instead of flying or walking. I thought this was a neat idea, particularly when they zoom around on the rail tracks at the beginning. However, they lose that unique feeling and become more Gundam-like as the show progresses, with the more advanced “generations” becoming able to fly and blast deadly laser beams. While these more powerful machines may not be anything different to other mecha series, I actually quite enjoyed watching the arms race between the Black Knights and the Empire as they each crank out even more ridiculously overpowered mechs over time.

Sunrise’s animation is generally great, particularly excelling in the action scenes and showing off their years of experience within the genre, as the Knightmare Frames zoom around the battlefield, while no matter where you look, there’s always something going on on-screen. The character designs for the series are done by CLAMP and they work really well to make each character stand out as an individual. You can see their distinct style in many of the characters, more so in the women of the series such as C.C., yet it does feel more toned down than you would expect from one of their own series. 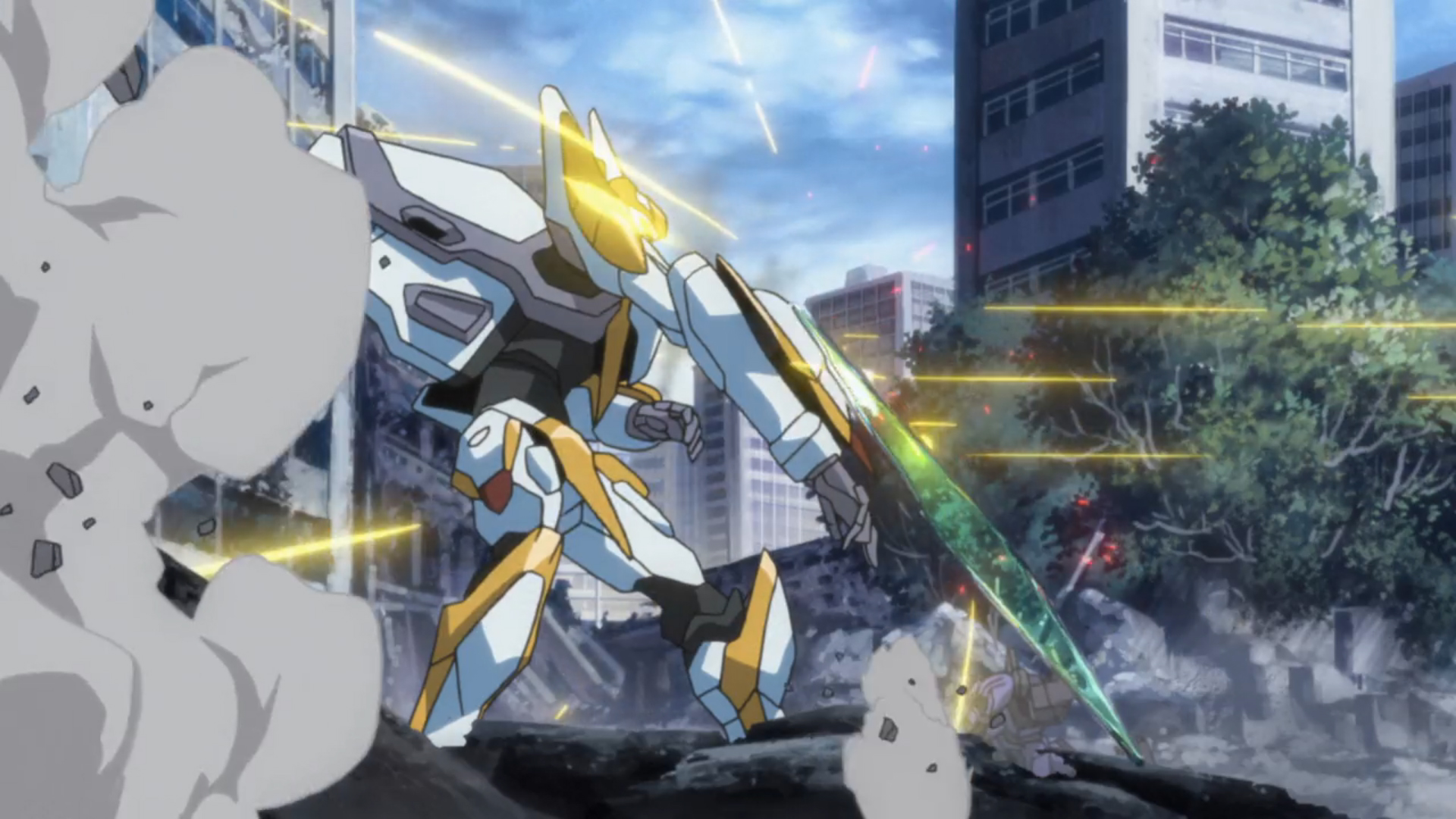 The series’ soundtrack, composed by Hitomi Kuroishi and Kotaro Nakagawa, is okay but not very memorable outside of some main character cues; while the opening and ending themes are a mixed bag. While I love FLOW’s tracks for the series, particularly with the initial “Jibun wo!” of “Colors”, others are either boring, such as Ali Project’s “Yuukyou Seishunka”, or just downright awful, such as “Kaidoku Funou” by Jinn.

The voice acting is good in both Japanese and English, although I did prefer the Japanese as the characters sound more distinct compared to the English dub. Jun Fukuyama does well to subtly switch tone between the more commanding Zero persona and Lelouch’s gentler one; while Tetsu Shiratori does a better job at sounding like a mad scientist for Lloyd Asplund than Liam O’Brien in the English dub, who comes off sounding a bit too posh for the role. 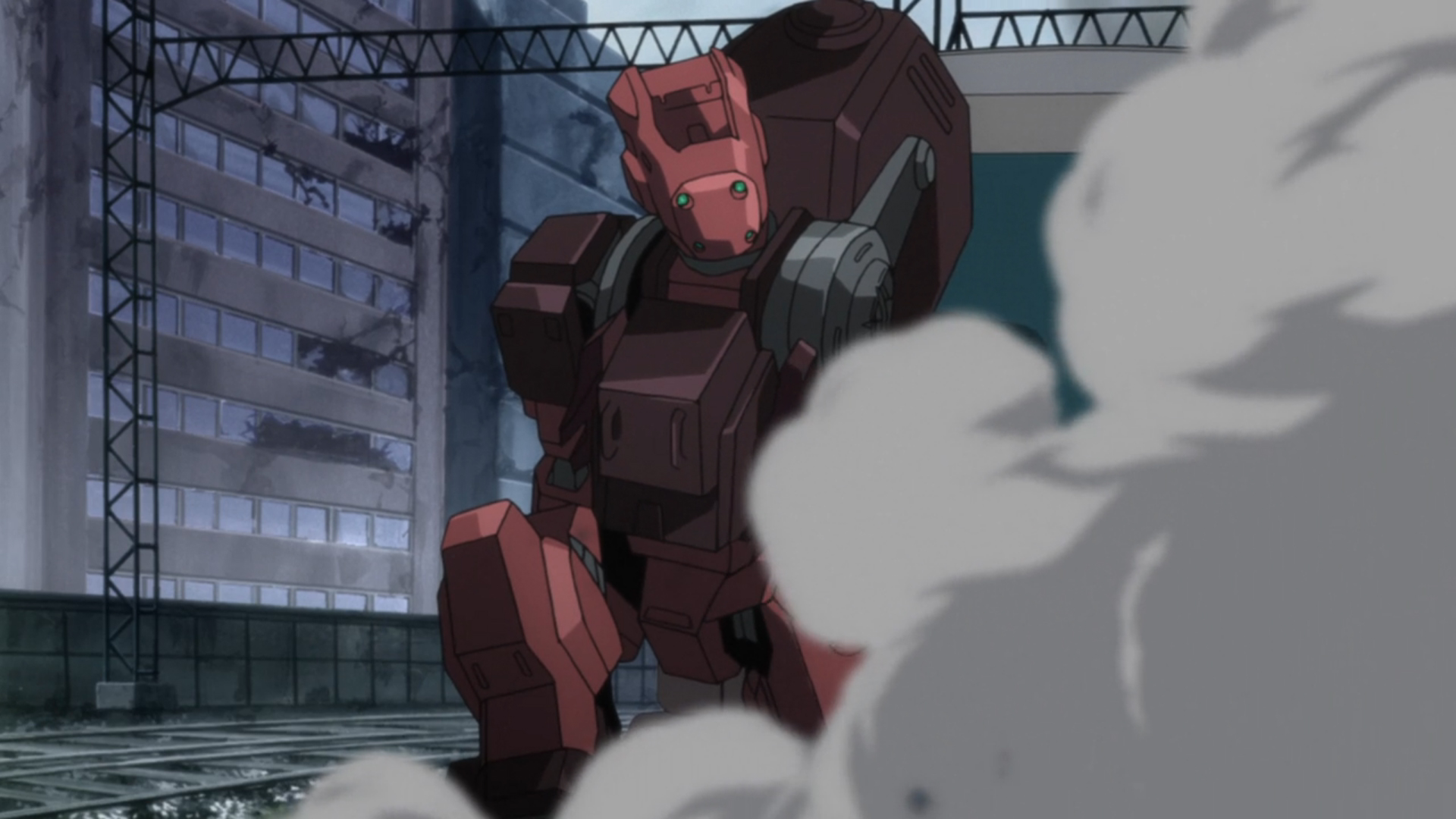 Manga Entertainment’s Blu-ray release of this series features all 25 episodes of Season 1, and all 25 episodes of Season 2 over six discs. While that is the release I reviewed, they are also available on DVD, separated out into a collection for each series. There are lots of extras scattered through the discs, with audio commentaries, clean openings and closings, and trailers; however, the most worthwhile extras are the picture dramas, as they offer a lot of information that isn’t revealed in the actual show, often acting as bridges between episodes.

Code Geass: Lelouch of the Rebellion is an anime series that has to be experienced to be believed: a frantic and breakneck rollercoaster of a show that just takes you along for the ride, with many of its best moments being in its intense action scenes and Lelouch’s moments of desperation. It does have some faults, like the skippable filler and the lack of depth in some of its characters and mythology, yet I can see why it is so loved by mecha fans, as it’s just simple pure fun. 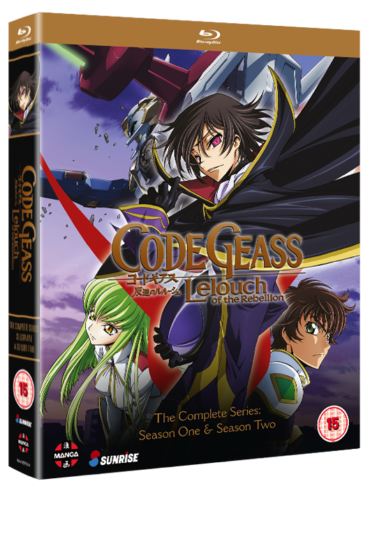