One Piece: Stampede, the fourteenth anime feature film based on Eichiro Oda’s hit manga, will receive a Limited Edition Blu-ray Steelbook release on 8th June 2020, the retailer Zavvi announced today. The Steelbook will be a Blu-ray and DVD Combo Pack, and is currently available to pre-order exclusively on Zavvi for one week only, before becoming available via other retailers.

The film will also be released on Standard Edition Blu-ray and DVD.

The world’s boldest buccaneers set sail for the great Pirate Festival, where the Straw Hats join a mad-dash race to find Gol D. Roger’s treasure. There’s just one little problem. An old member of Roger’s crew has a sinister score to settle. All bets are off when the most iconic pirates of One Piece history band together for a swashbuckling showdown, the likes of which have never been seen!

One Piece: Stampede had its UK premiere as the Mystery Film at Scotland Loves Anime in Glasgow and Edinburgh last October, and was released nationwide by Manga Entertainment on 2nd February 2020. 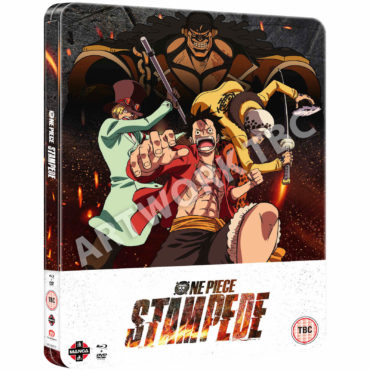 The BBFC has updated their website with a 12A rating for One Piece Stampede’s trailer, potentially suggesting a UK release for the film!