Since the release of Wotakoi in the West, I’ve been keeping an eye out for similar workplace romance stories. This month Kodansha is here to deliver the new manga series Sweat and Soap, which promises a similar combination of love and everyday office problems. Does it offer a delightful read? Let’s take a look!

Our story follows 26-year-old Asako Yaeshima who works at toiletry maker Lilia Drop. Asako has long suffered from sweating copiously and was bullied at school because of it and her body odour. She’s ashamed of her body odour and makes frequent trips to the bathroom to wipe herself down and refresh.

One day Asako is admiring Lilia Drop’s upcoming Spring collection of products when she’s suddenly interrupted by Kotaro Natori who requests to study her scent after he declares it gave him chills! Asako is understandably freaked out by this and makes a run for it, but Kotaro quickly catches up and tries to explain himself.

As it turns out, Kotaro works in Lilia Drop’s planning department and he wants to study Asako’s scent in a bid to give himself some new product ideas. Realising that Kotaro is behind the soaps Asako loves, she reluctantly agrees to help him out for a week, but what starts out as an innocent favour quickly turns into something more steamy…

After Kotaro rescues Asako from a pervert on the train home, the two spend the night together. Since working together they’ve become close and Kotaro has helped put Asako’s fears about her body to rest, which is a much-needed confidence booster. However, now the two are a couple, they’re going to have their fair share of problems to overcome if they want their relationship to succeed!

With Kotaro working in product planning and Asako in the finance department, one of her biggest fears is that she’s not good enough for him. She doesn’t want anyone to look down on her boyfriend because of her average looks or body odour. For his part, Kotaro is unconcerned and just wants to show the world how much he loves Asako, but he understands her perspective and works hard to respect her wishes while combating her fears.

The downside of not revealing their relationship soon rears its head though, as Asako spots Kotaro surrounded by female colleagues from his department. She knows she has no reason to feel jealous of them, but she can’t help those feelings bubbling up – especially with how happy Kotaro looks in their company.

Honestly when I first read the premise and saw the front cover of Sweat and Soap I wasn’t expecting such a sweet romance series. The vibe they give off is somewhat creepy and off-putting, especially as Asako doesn’t look happy with Kotaro standing behind her. The manga is a seinen which means it’s targeted at men in their late teens/early adulthood, so perhaps the imagery is more appealing to that demographic than me.

However, having said that, once you get into the manga itself it’s a lot more appealing to a broader audience. Mangaka Kintetsu Yamada has a clean and attractive style of artwork, which gives off a cute and heartwarming image. Asako and Kotaro both have simple but expressive designs that perfectly convey their thoughts, even those left unsaid. Yamada uses large panels (sometimes a full width of a page instead of smaller panels) to emphasize the actions of his characters and that’s a style I’m fond of in manga right now. He also has a good awareness of how to balance spicy scenes and the wholesome content of the story, making for a compelling and heartwarming read.

This is Yamada’s first full-length series but they have several one-shots under their belt and were a runner-up in the Tezuka Award. In the afterword for this volume of Sweat and Soap, the author comments that this series also began life as a one-shot, which is why Chapter 1 feels like a complete story all of its own. Its popularity allowed it to be turned into a series which has been running in Japan since 2018 and has already reached 6 volumes and counting!

As previously mentioned Volume 1 of Sweat and Soap makes its way to the West thanks to Kodansha Comics. The series has been translated by Matt Treyvaud and the translation reads well with no issues to speak of. Volume 2 of the series is currently scheduled for release in April.

Overall, Sweat and Soap Volume 1 brings a new tale of office romance to the market. While the cover and synopsis may put some readers off at first glance, I encourage you to look beyond that because there is a hidden gem underneath. If you’re looking for a sweet love story involving adult characters then certainly give this one a go!

A free preview of Volume 1 can be read on Kodansha’s website here. 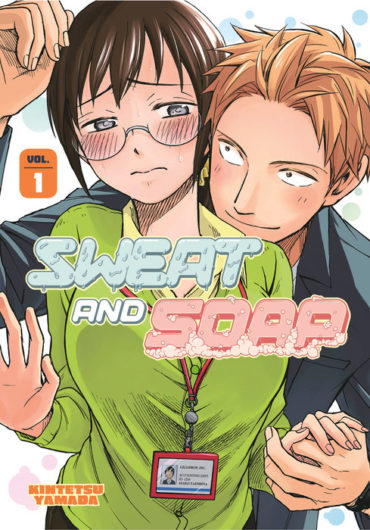