In Volume 5 of Sweat and Soap, we were treated to a cute Christmas date and seeing Kotaro meet Asako’s family for the first time. Now we’ve reached Volume 6 which has its fair share of celebrations with Valentine’s Day right around the corner, as well as Asako’s birthday. Among all these big events, how are our couple doing?

While Volume 5 of the series was fairly light and happy, this instalment takes a much more serious tone. Yes, Kotaro and Asako are as loved-up as ever, but now the subplot from Volume 4 of them moving in together has come to fruition and that has brought with it quite a few problems!

Before the two move into their new place, they first celebrate Asako’s birthday. As her present Kotaro invites her to a perfume maker, where they can create a special scent just for her. As someone who has always been worried about their body odour from sweating so much, Asako isn’t used to wearing any kind of perfume. But thanks to Kotaro’s skills in developing soaps, the two manage to pick out something perfect for her.

With Asako now wearing her new fragrance, the couple set a course toward the restaurant Kotaro has booked for dinner, but when he steps away from Asako to make a phone call she’s chatted up by a handsome stranger. Although Kotaro swiftly returns and breaks the conversation up, Asako is still given and accepts the man’s business card which makes Kotaro feel jealous.

Kotaro knows that Asako would never act on the business card and meet this man, but he can’t help feeling worried that she will. Asako notices his change in behaviour for the rest of the day and once they return to her place, she confronts him about it, which leads to fairly emotional exchange.

Afterwards, the two begin living in their new place together, but this leads Asako to notice Kotaro acting strangely. He’s doing far more of the household chores than she is and is putting himself out to get things done when he’s far busier at work than she is. She feels as though he’s both protecting and tiptoeing around her in ways he never did before they moved in.

While this instalment of the series is certainly not as sweet as others have been, I do appreciate the time spent on these serious issues that have been building between the two. as they’ve spent no significant time living together before now, I think it’s very natural for there to be teething issues. Normal things like not wanting to be a bother to one another, right down to someone taking on too much to give their partner some time to relax.

To get over these things, couples need to talk to one another and, as always, that’s the thing Sweat and Soap portrays wonderfully. Asako and Kotaro never let their issues linger for more than a few days before finally opening up about it and the way author Kintetsu Yamada draws these scenes is always tender and realistic. No relationship is perfect, but together, problems can be overcome and that’s a very important message to give readers of the series.

It’s quite impressive how well-balanced the storytelling has been across the six volumes so far. Yamada manages to never fall too far into the drama nor stay safely in the cuter storylines. I’m sure it’s incredibly difficult to find this balance, but I’m pleased the author has managed to keep it up so far since it has led to one of the best romance manga in recent years.

As usual Sweat and Soap Volume 6 comes to the West thanks to Kodansha and has been translated by Matt Treyvaud. The translation reads well and there are some translation notes at the back of the book, mostly talking about food this time around. Volume 7 of the series is currently scheduled for a release later in July.

Overall, Sweat and Soap Volume 6 deals with some difficult topics as Asako and Kotaro take the next steps in their relationship. Once again the manga is an incredibly sweet and relatable read that belongs in everyone’s collection. 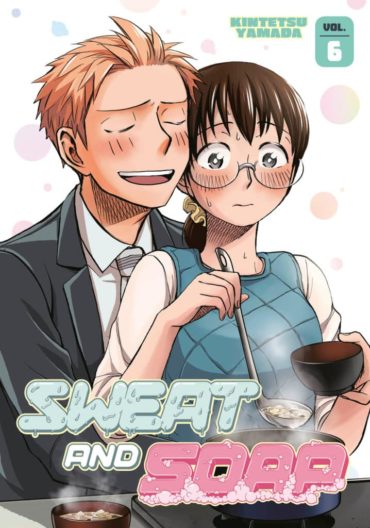