“O, my knight…let your true strength be restored!”

When your childhood friend is a figure skating star competing at international level, it’s only natural to want to go to cheer him on in the rink. But twenty-three-year-old Chitose Igari has a promising career of her own; she’s working for health-and-lifestyle magazine SASSO and is really excited to get a special assignment which will take her all the way to Brazil! What’s more, her good-looking boss, Sawada, is going along too to ‘chaperone’ her (even though he’s not too keen on wildlife or insects). And there’s a slight problem; the Brazil trip coincides with the Grand Prix Finale in Canada in which Kokoro Kijinami (or Kokoppe as she calls him, a childhood nickname) is competing. And Chitose (or Se-chan, as he calls her) knows Kokoro’s secret: he might skate like a dashing knight on the ice but at heart he’s a secret otaku and needs his Se-chan there in the rink to work her magic, pronouncing a spell from their favourite childhood anime to give him the necessary motivation and confidence to perform at his best. What will happen when she’s far away on her work assignment in Brazil? Will Kokoro win through, in spite of the odds, or is he unable to skate without her at his side?

Yayoi Ogawa – best known in the West for her vibrant josei series Kimi wa Pet (You’re My Pet/Tramps Like Us) – returns to josei manga in triumphant form with this fun melange of figure skating and romantic comedy (and a strong dash of affectionate magical girl anime parody thrown in for good measure). Her graphic style has matured a lot since the early days of Kimi wa Pet (the first chapter is included at the end of this volume) and, obviously a fan of figure skating, her portrayals of Kokoro and the other skaters performing on the ice are superb. It’s a visual treat! And she’s lost nothing of her ability to create interesting and memorable people: diminutive Chitose (called ‘Little My’ by her boss, after Tove Jannson’s feisty top-knotted character in The Moomins) makes a sympathetic lead. Although she and Kokoro seem to be in denial when it comes to their real feelings for one another. All the rest of the cast so far are colourful (as to be expected from the author of Kimi wa Pet) from Kokoro’s grouchy coach to the other skaters competing alongside Chitose’s ‘Prince’. There’s even an appearance by the mangaka herself, heavily disguised…

Rose Padgett delivers an enjoyable translation, managing to skilfully convey the differences between Chitose and Kokoro’s ‘homely’ Fukushima dialect that they slip back into when alone together, yet try to hide from the outside world – and standard Japanese. There are three helpful pages of Translation Notes at the end and three more packed with details about the world of skating. A profile page follows dedicated to Kokoro Kijinami. There’s also a charming thank you by the mangaka to the team who worked with her on the manga (including her own skating coach) and a whole page trailer for Volume 2. If that wasn’t enough, we’re also treated to the opening of You’re My Pet (currently available digitally from ComiXology and Kodansha and free to read on Amazon Prime at the moment). Also, a word of praise for the imaginative cover design to Phil Balsman: the matte background makes a great contrast to the Knight of the Ice himself, in full gloss with sparkles and the title lettering very cleverly done to catch the attention of potential readers (check out the word ‘ICE’).

So, if you enjoy the world of competitive ice skating (and loved Yuri!!! On Ice, which, incidentally, this predates by four years) you’re going to love this, even if it has a hetero couple at the centre of the narrative. There’s a need for entertaining, grown-up josei manga like this – and Yayoi Ogawa is just the right mangaka to deliver an amusing and endearing story, which bowls along at a lively pace, yet takes enough time to develop the characters in a satisfying way. There’s ten more volumes to look forward to.

Read the first chapter on the publisher’s site free here. 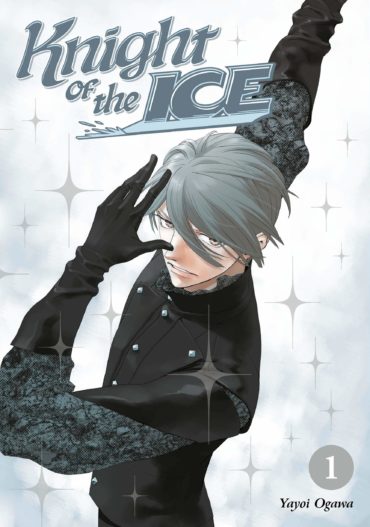 Title
Knight of the Ice