The summer anime season is upon us and one highly anticipated adaptation is romantic comedy Rent-A-Girlfriend. In the run-up to the anime airing, manga publisher Kodansha have just brought the series to the English market. Today I’m here to check out the first volume and find out if it proves an entertaining read.

The story follows 20-year-old college student Kazuya Kinoshita, who is living off the million yen his parents gave him and enjoying his school life. Unfortunately not everything in Kazuya’s life is going well as he’s just been dumped by his girlfriend whom he’d been dating for a month! She even went as far as to block him on social media.

After two days of not sleeping and crying over his lost romance, Kazuya stumbles upon an app for a ‘rental girlfriend’. Thinking he has nothing to lose and tormented by thoughts of his ex-girlfriend with her new boyfriend, Kazuya decides to give the service a shot.

The girl Kazuya chooses to spend a day with is Chizuru Mizuhara, who appears to be perfect girlfriend material. However, after their ‘date’ Kazuya researches Chizuru on the internet and discovers that this perfect first date was an act she puts on for every customer. In a fit of anger, Kazuya leaves her a bad review but this will come back to bite him later…

Ultimately Kazuya ends up renting Chizuru again, hoping to confront her about why she puts so much effort into her job when she’ll only be spending a few hours with someone. As Chizuru begins to argue with Kazuya about the fact she’s just being professional and didn’t deserve a bad review for their last date, Kazuya receives a phone call telling him that his grandmother is in hospital.

Kazuya rushes over to the hospital with Chizuru and ends up introducing her as his girlfriend, which his grandmother is delighted to hear! Not wanting to disappoint his family, Kazuya is now stuck lying to them and Chizuru certainly isn’t best pleased about being stuck with the man who left her a one-star rating!

I’m sure to many of you the idea of renting a girlfriend seems alien or something to look down upon, but rental services are a common practice in Japan. You can pay for a rental partner, friend, sibling or parent to fill a gap in your life for a few hours a day. These services are strictly regulated and in Kazuya’s case, the rules prohibit him from any physical contact or being alone in private with Chizuru.

Our protagonist is completely uneducated when it comes to these services and so we as readers can learn more about it alongside him. Of course, this manga is a romantic comedy and although it does go to great lengths to teach Kazuya about renting a girlfriend, it spends most of its time putting him in ridiculous scenarios.

The manga’s set-up is fairly unique and I certainly enjoyed seeing Kazuya’s life descend into utter chaos as the story went on. Volume 1 includes the first 5 chapters of the series and that’s enough to give us a solid grasp of the series’ sense of humour and what it intends to do going forward.

While author Reiji Miyajima has a couple of other manga to their name (although none in English), Rent-A-Girlfriend is their first long-running series. Despite this, the series is surprisingly well written and the artwork is detailed and attractive.

While Kazuya comes off as an immature and sometimes sleazy guy, I like that Miyajima has written Chizuru to be a strong female character. She’s always there to put Kazuya in his place and isn’t likely to go along with his nonsense. The chemistry between them alleviates any uncomfortableness that the series could have potentially had.

The only thing I don’t like about Miyajima’s artwork is Kazuya’s design. Compared to the other characters in the series it feels out of place, perhaps because the proportions of his face are off. I think that’s something that could improve as the series goes on and it’s not a major problem, but still worth noting.

As previously mentioned, this series comes to the West thanks to Kodansha Comics and has been translated by Kevin Gifford. The translation reads well with no issues and there is a page of translation notes at the back of the release. Rent-A-Girlfriend is on-going in Japan at 16 volumes and Kodansha has Volume 2 of the English release set for August (although this is likely to change).

Overall, Rent-A-Girlfriend offers an entertaining read with a unique set-up. If you’re looking for a new long-running romcom to replace the recently concluded Domestic Girlfriend or just fancy something in the genre, then this is certainly worth a look. There is plenty of potential for ups and downs and I’m looking forward to seeing how things develop for the cast. 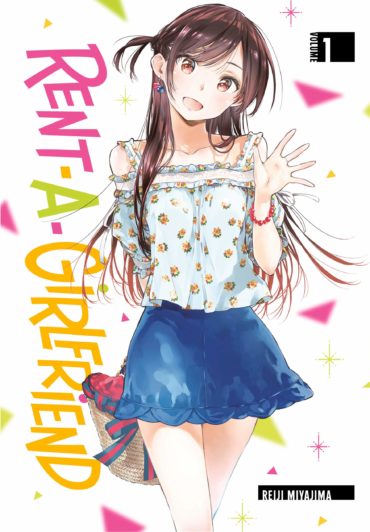