The story follows high school girl Nina Kamiyama, who keeps to herself and dresses in the boys’ school uniform. Nina was formerly known as Karen Amamiya and was a member of the idol group Pure Club, but after being attacked by a fan Nina retired from the industry. After the attack, Nina shunned her femininity and everything that makes her a woman.

Suddenly a girl from a nearby high school is attacked, sending Nina’s classmates into a frenzy of worry for themselves. For Nina, this brings back memories of her attack and concern that it could be the same person (since her attacker was never caught), but surely they wouldn’t still be after her…?

Not Your Idol is trying to be a lot of different things. On one hand, it’s a psychological thriller, but on the other, it’s trying to stand up for women and how they don’t deserve to be harassed by men just for being female and wearing skirts. The problem is that it tries to juggle too much and doesn’t manage any of it all that successfully.

The biggest issue is perhaps Nina herself. When we first meet her she’s a strong female lead, but the introduction of a male love interest, known as Hikaru, starts to break down her character. Hikaru is part of the judo club at school and one of Nina’s classmates. After the warning from their teacher about a girl being attacked, Hikaru tries to get closer to Nina under the pretence of protecting her.

While Nina is at first adamant that she doesn’t need a man to protect her, her strong resolve begins to crumble as time goes on. Nina even begins to wonder if she could be a pretty girl who can stand beside Hikaru, a thought that I feel is quite far removed from what Nina’s personality is supposed to be. There’s a conflict between Nina saying that girls don’t dress up to impress boys and then wondering if she can be a cute girl for Hikaru. If all it took was one boy to pay attention to her, Nina would have overcome her trauma and resolution to cast off her femininity long ago.

Even away from the relationship between Nina and Hikaru, the manga has quite a few rough edges to smooth out. It spends time on the budding romance between Nina and Hikaru, Nina trying to overcome her past trauma, and on the threat still at large, which is a lot for one volume! It’s mixed messaging and difficult to get into when you’re not sure what to expect next.

Interestingly in Japanese Not Your Idol was titled Sayonara Miniskirt (or Goodbye Miniskirt), which feels like a more fitting title, even if unintentionally. The story feels almost as though Nina is rejecting her idol persona and female clothing than it is her rejecting being a woman full stop. The title Not Your Idol projects a strength of character that Nina just doesn’t have. It says that she doesn’t want to belong to anyone, but that doesn’t come through in the story at all.

This series has been created by mangaka Aoi Makino (who has several titles to their name before this, but none licensed in English), who does an okay job with the artwork. Makino is good at conveying emotions and has nicely detailed art, but I found the character designs difficult to get on with. Everyone has huge eyes that don’t fit well in more compact scenes and I found them very distracting. They almost look like dolls rather than real people.

As previously mentioned Not Your Idol Volume 1 comes to the West thanks to VIZ Media and has been translated by Tetsuichiro Miyaki. The translation reads well with no issues to speak of.

The series is on-going in Japan at 2 volumes, although it does seem to have been on hiatus since last Summer so the next volume may be the last of it. Volume 2 is currently scheduled for an English release in October, although I imagine this might yet change.

Overall, Not Your Idol Volume 1 is a mixed bag. There is too much going on to get a grasp of where the story is going and what it wants to say. It’s clumsy and somewhat frustrating to read. There are certainly some interesting elements here but so far they’re not enough for me to recommend this to shojo readers. Perhaps it’s a title worth revisiting when Volume 2 rolls around. 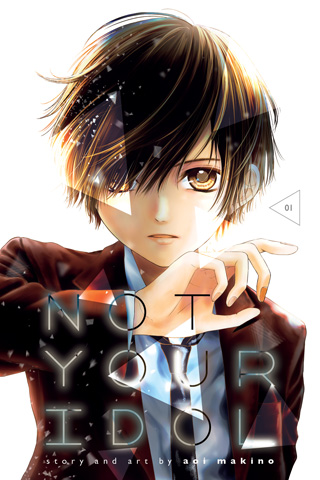 Title
Not Your Idol Volume 1

Not Your Idol Volume 2 Review

A few months ago Viz Media released the first volume of Not Your Idol into English. Despite a disappointing first instalment, we check out Volume 2 to find out if the series has improved.