WARNING: This is a mature title for adult readers only and the review contains spoilers to Volume 1 and Volume 2.

For those who have been following Hell’s Paradise, a lot of information as to the setting and the mysterious elixir of life are finally revealed in this volume.

At the end of the last book Gabimaru, Sagiri, Yuzuriha and Senta had stumbled across abandoned villages and found one girl on her own. They are then attacked by one of the island’s monsters, a tree monster to be exact, which they attempt to fight. The girl herself is also strong and capable of landing a few blows on Gabimaru until he uses some vines to tie her up.

Yuzuriha defeats the tree monster, who then speaks to them and says that he can provide the gang with information about the area. The tree monster, named Hoko, leads the gang and the girl, called Mei, to a village that has been abandoned for over 1,000 years, mainly because it has a bath that Yuzuriha wants to use.

Here, Hoko explains some of truths about the island. The monsters refer to themselves as the Soshin and to the island as Kotaku. The elixir, which the Soshin refer to as Tan, can be found in the misty centre of Kotaku, called Horai. Kotaku is ruled by the “immortal father” Lord Tensen, who refuses to allow any human who sets foot on the island to leave. He transforms humans into ever-lasting blossoms, free from earthly desires, which become the source of Tan. Senta notes that many of these names have links to the Tao. Gabimaru, however, is more interested in finding the Tan and returning home to see his wife again and goes off on his own to locate Horai.

Elsewhere on the island, Nurugai and her guard Tenza try to look for ways off the island, but soon encounter one of the Soshin, one capable of moving from one gender to another, who fights them. When it looks like nothing can stop the Soshin, they are saved by Tenza’s blind master Shion, but even then, not all of them will escape the wrath of this Soshin, with one of the group being defeated. It is not before long that this Soshin has an encounter with Gabimaru too.

As mentioned, in this third volume the main feature is the revealing of new information key to the story itself. We finally hear from the island’s natives themselves, and we can put a name and a face to Lord Tensen, who appears to be the main antagonist in the tale. We also learn about details of the actual elixir, and that it might be possible that characters whom we thought were out of the equation could return. Other new characters in the story, especially Hoko and Mei, are also entertaining: Hoko acts as a kind of guide although he wants little interference from his visitors, while Mei is cute yet at the same time hugely strong, being able to hurt the mighty Gabimaru. One of the nicer moments in the story sees Sagiri giving Mei a bath.

There are other parts of the story that make for moving reading too. One is a flashback with Gabimaru and his wife during a bathing scene, where Gabimaru says that his wife should not try to hide a scar over her eye with her hair. In terms of bathing, this leads to some fan service with Yuzuriha. You can argue that same fan service applies to Gabimaru too, if you like your guys covered in scars, that is.

The art and battle scenes are still gripping to watch. Tenza’s fight with the genderbending Soshin makes for a spectacular and also violent episode. This in turn leads to that Shoshin’s battle with Gabimaru, which is a gruesome affair, but one that will keep you reading.

In terms of negatives, there is the odd element of Caleb Cook’s translation that does bring up questions. I for one am not entirely convinced by one passage in which Tenza, in the vital moments of his fight when he is on the verge of death, that he would shout: “Not on my watch!!” It feels a bit American/Hollywood action film cliché.

As we move forward, it certainly looks like there will still be more action to come as the gang continue in their quest, and face more dangers in their attempt to find the elixir. As to what the dangers are and how they will overcome them, that is to come. 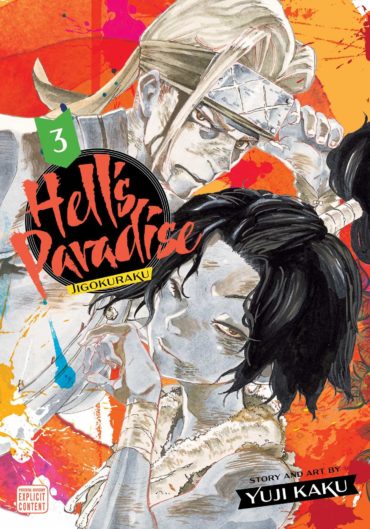