WARNING: This is a mature title for adult readers only, and contains spoilers to Volume 1, Volume 2 and Volume 3.

The fourth volume of Hell’s Paradise still contains a lot of action and violence, but in this volume we also see the move into something else that may well be considered only suitable for people aged 18 and over.

Gabimaru has once again just defeated some of the local monsters, the Soshin, while helping the rather helpless Soshin girl Mei. The beginning of this edition sees him encountering another of the criminals sent to the island to find the elixir of life, the one-handed swordsman Tamiya Gantetsusai, who is accompanied by his Yamada Asaemon executioner Fuchi. Gabimaru judges Tamiya, and offers him the chance to team up with him to fight the Soshin. Tamiya agrees, partly because his overall ambition is not the elixir of life for himself and to become literally immortal, but to become metaphorically immortal in the stories and legends that will passed down by others after his death. However, things become stranger for Gabimaru when suddenly he sees that Mei has instantly aged into a teenager and can speak some words.

Soon the group find themselves fighting more Soshin. Meanwhile, the tree-like Soshin Hoko, who had been looking after Mei, explains to Gabimaru’s companions more about how the island of Kotaku works. The ruler, Lord Tensen, is made up of seven immortal, gender-shifting beings. The humans that live on the island can live long lives, around 1,000 years, but will eventually become tree-like, much like himself. He also explains something called “Tao”, a type of energy that flows through all living creatures. Harnessing the Tao is how Tensen’s servants fight.

Meanwhile during their fighting, some of the Soshin discover that Mei is with Gabimaru’s group. They address her as “Lady Mei”, and Gabimaru discovers that she originally came from Tensen’s palace. She was thrown out as she only had, “yin-aligned chi” and was, “an inferior breed”. Her only choices were to die or retrain as a “training partner”. You see, it turns out that there are five ascetic methods for training how to use Tao. The most important is called “bochu jutsu”, and it requires a training partner as this method requires what they called “intimate congress”. In other words, to use Tao, you need to f***, and Tensen wants to use Mei for that reason. This revelation leads to Gabimaru fighting to protect Mei even more, and to stop the Soshin from treating Mei like an object.

Upon reading all this, my feelings towards Hell’s Paradise have become more complex and uncomfortable. The fact that this series is a particularly violent one, and there are plenty of fight scenes to keep the readers entertained in this volume, doesn’t really bother me. However, now that sex has been brought into it, and by the sound of things, sex that is not consensual, the story takes a very different tone. For starters, the fact that Mei seemingly has no power of her own and relies on Gabimaru and Hoko to protect her now makes it feel like Mei is falling into the “damsel in distress” cliché. Also, we do witness the aftermath of one of Tensen’s sex scenes, and that is shown to also be very bloody, so the sex itself is rather extreme and uncomfortable viewing.

Another issue is that the story is constantly moving away from Gabimaru and his friends to other members of the expedition to the island, who at this point in the story at least feel rather minor. Yes, they do have some good fight scenes, but it doesn’t really seem to move the plot on that much. At least with Gabimaru’s friends we are with some of the main characters still and some of the information around the island can be learned, but these other little pairings seem to be not that interesting.

It does feel that the story is becoming a bit less entrancing as it is relying more on the sex and violence rather than the plot to move things forward. Hopefully things might pick up again in Volume 5. 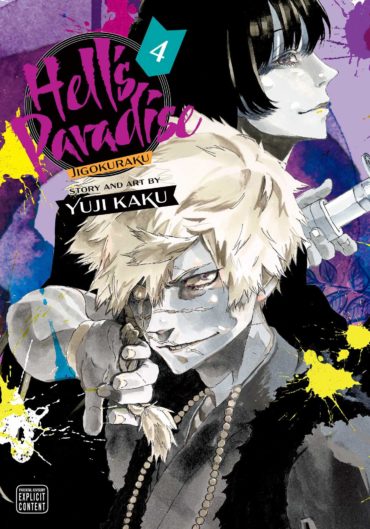