Any adaptation of a manga by CLAMP has instant appeal, as the fan base is so devoted to it. One of the longer of the anime versions of their work at 49 episodes (not including the OVA version as well), there is plenty to digest in this Blu-ray release of the TV series, coming to the UK for the first time.

The series begins at Tokyo Tower, a key location for many of CLAMP’s works – some of their other series, such as CLAMP School Detectives and Tokyo Babylon also have their opening chapters set there. At the tower are several groups of children on school trips. Among these the people are three girls from different schools: the energetic Hikaru Shidou (red), the cool-but-often-angry Umi Ryuuzuki (blue), and the smart Fuu Hououji (green). As the girls meet each other for the first time, a bright light shines upon the tower and they hear a female voice calling for help. Soon the girls find themselves disappearing from the tower and landing in an entirely new world. 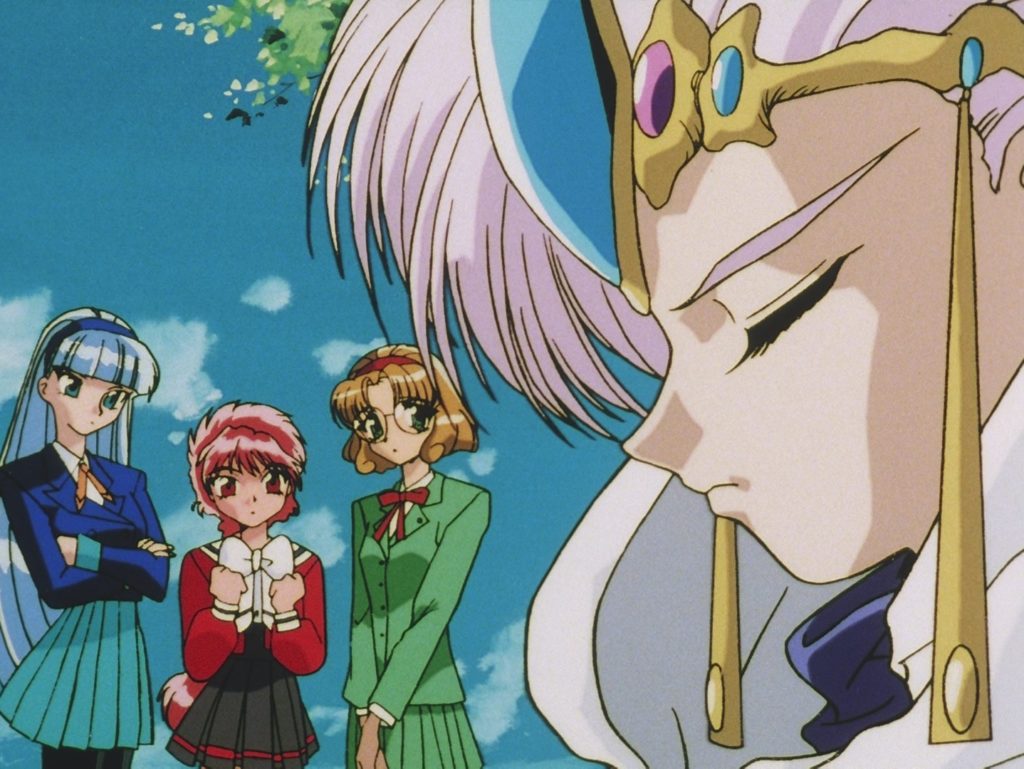 The first person they meet is the Master Mage Clef. He tells them they are in the land of Cephiro, which is ruled by the wills of the people who live there. The person they heard when they were summoned was Princess Emeraude, the “Pillar of Cephiro” who keeps the land in check through the power of prayer. However, she has been kidnapped by her high priest Zagato. Now, various monsters roam the land, and it is up to Hikaru, Umi and Fuu to save her. To do so, they must become the legendary “Magic Knights” by summoning three beings called “Rune-Gods”.

Clef helps by bestowing magic on the girls, but he is only able to give magic to Hikaru before they are attacked by one of Zagato’s loyal minions. Clef helps them to escape, meaning he can only talk to them remotely. This is done by the help of a strange creature called Mokona, who can seemingly create things using a jewel in the centre of Mokona’s head. This same jewel allows Clef to speak to the girls, with later episodes allowing him to give Umi and Fuu magic too. Hikaru’s magic is based on fire, Umi’s on water and Fuu’s on wind.

On their journey to rescue Princess Emeraude, the girls first need to get special weapons made for them by the master smith Presea. With Mokona guiding them, they face many of Zagato’s monsters and subordinates on their journey but also make alliances, most notably with the swordsman Ferio, who falls in love with Fuu. As they secure the material needed and eventually get their weapons made, the girls progress and travel to find the three Rune-Gods: Selece, Windam and Rayearth. 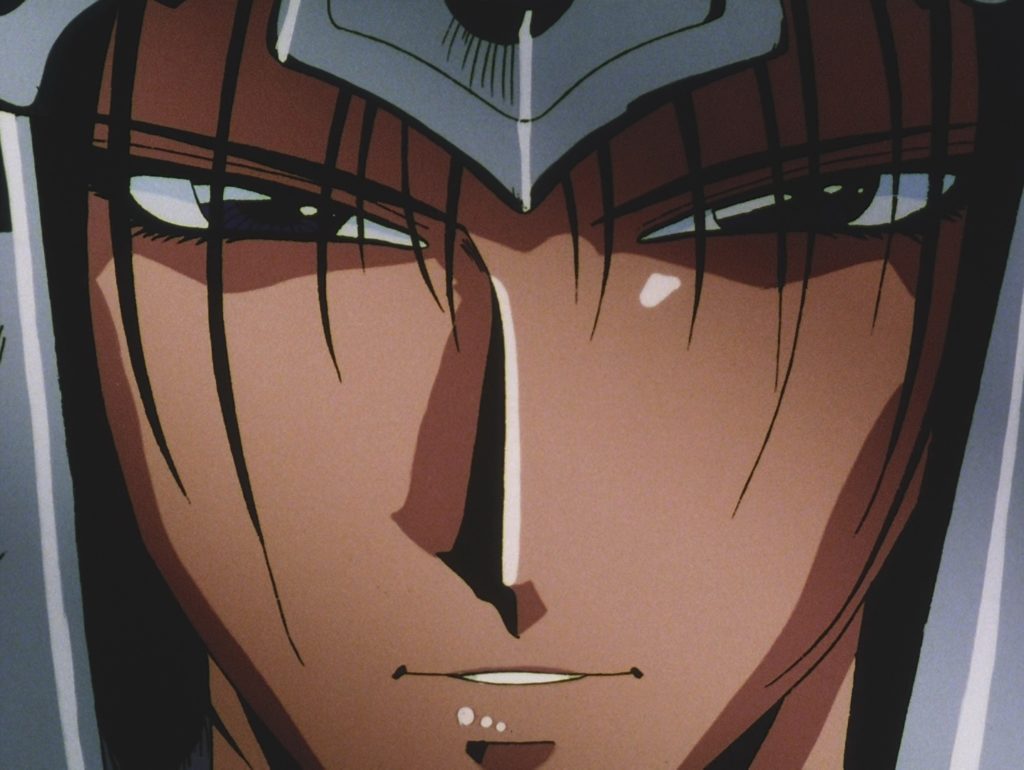 Magic Knight Rayearth is of particular interest to anime fans today because, while isekai series set in other worlds are now very commonplace, this was one of just a small number back when it began in 1994. Around the time the anime started, the manga version of another hit isekai series, Escaflowne, had only just began. Although Rayearth was certainly not the first in this genre that had yet to be named at the time, you could argue that CLAMP were early pioneers. The fantasy setting allows the artistic talent of the group to shine through, with Cephiro having a wide variety of landscapes: deserts, oceans, lakes, volcanos and floating islands make up this wonderful world.

Both anime also use mecha in a fantasy context. While they don’t appear for most of this collection, the later episodes sees the three girls piloting mecha based on the Rune-Gods. However, “piloting” is perhaps stretching things. It is not exactly clear how much of what is done is due to the knights or due to the Rune-Gods, and nothing at all is shown as to how they work. Looking at both, Rayearth is probably the better series in terms of fantasy, but Escaflowne is superior regarding the mecha. 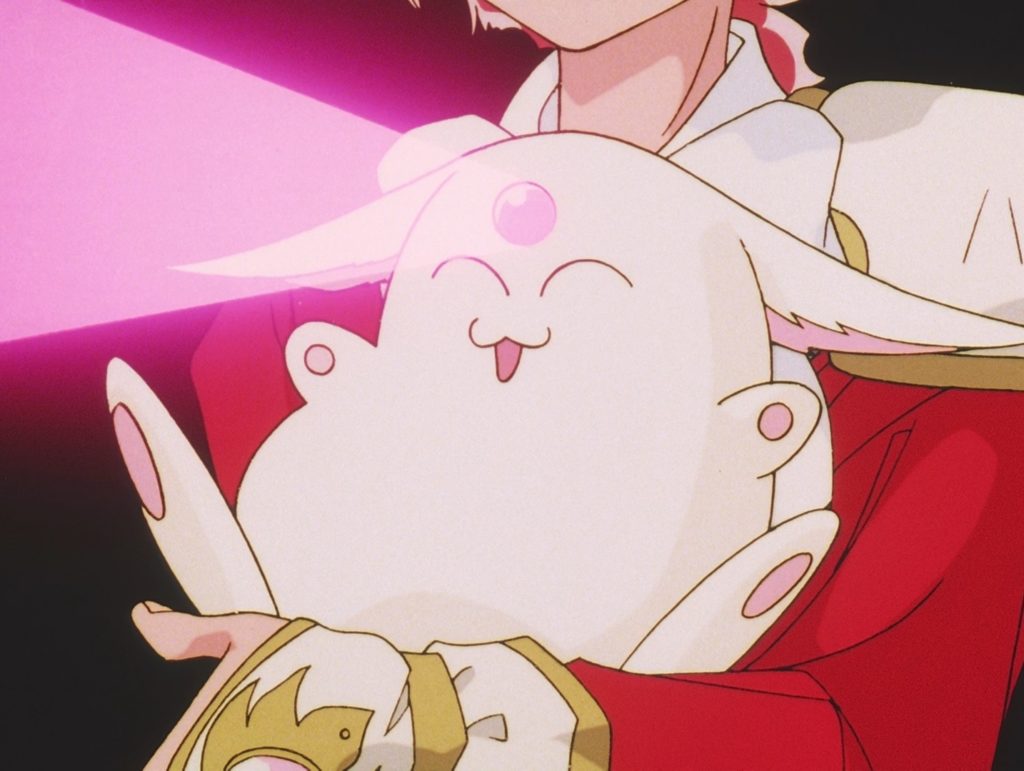 One other area in which Rayearth is superior to Escaflowne is humour. The main trio often provide many laughs, with Hikaru being loud, headstrong and rushing into things, Umi constantly wanting to get back home and Fuu acting as the straight-woman, while also providing some romcom elements with her relationship with Ferio. Also, the anime often depicts the main characters in chibi form for added laughs. The names of the people of Cephiro also have some comedy to them, in that most of them are named after types of car – e.g. the Mitsubishi Emeraude, the Mazda Clef, the Honda Civic Ferio, the Nissan Presea and the Zagato coach-building firm from Italy.

Having said this however, there are times in the series where scenes played for laughs backfire rather badly. In fact, looking back at Rayearth, it contains probably the most politically incorrect moment in all of CLAMP’s work – which considering the fact that their debut manga RG Veda was an adaptation of Hindu mythology featuring a predominantly white cast, is saying something. This occurs in the second episode where Presea tries to trap Mokona in a cage, and thinking she has done so sees her celebrating in a Native American headdress while whooping. After realising she has instead caught the three girls, she does the same whooping scene saying that she might boil them in a pot – which among other things, is a different racial stereotype. This kind of stereotyping only occurs this one time, and while at the time it was made it was not seen as offensive as it is now, it still feels disturbing whether you see it on screen or CLAMP’s original manga, where it also occurs (see p. 135 in the paperback Dark Horse version). 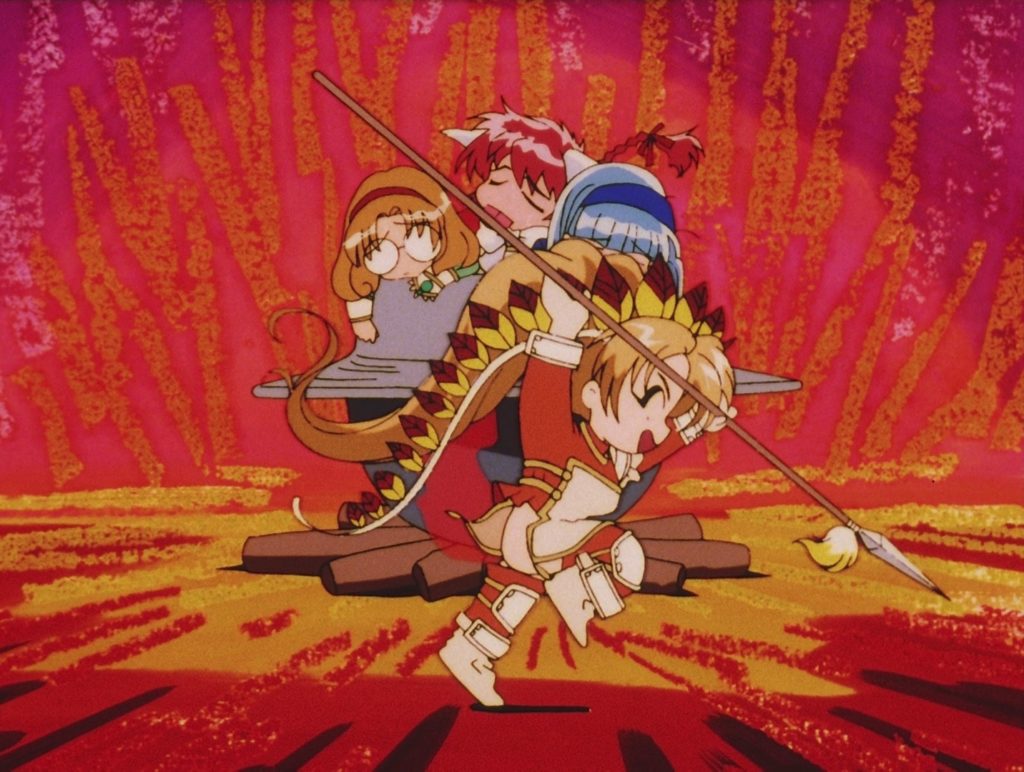 Concerning the sub and the dub, for me the English dub feels too cutesy American for my tastes. I would personally go for the subtitles version. The subtitled version however does have issues too. For example, it is unclear as to what gender Mokona is, if Mokona has a gender at all. In the original Japanese, Fuu refers to Mokona as “Mokona-san”, but this gets translated in the subtitles as “Sir Mokona”, when the term “-san” is gender-neutral. Mokona does not speak in the series so it is impossible to ask Mokona any questions regarding gender, although if you were to ask the version of Mokona in CLAMP’s later series Tusbasa in which the characters does talk, you would probably get the answer: “Mokona is Mokona”. There arealso other issues with the subtitles. In the anime, the land the girls are sent to is spelt “Cephiro”. However, in the English-language version of the manga, it is spelt “Cefiro”. If you remember back to the naming conventions of the series, you perhaps will not be surprised to learn that there is also a car called the Nissan Cefiro. It is unclear as to whether this change in spelling is a simple mistake or if it was done for another reason, such as copyright, but whatever the reason, the joke is lost at some point.

For the music, probably the best piece is the first opening track, “Unyielding Wish” by Naomi Tamura. It is a pleasant track that fits the tone of the show well.

The collection lists the extras as: next episode previews, bumpers, recaps and omake endings, although there is no “extras” selection on the discs to speak of; it’s just a list of what is on in-between each episode. One extra not listed however which is of more interest is a 16-page artbook, mainly of images that are used as inserts between the adverts in the second series of the anime. Oddly, this 27-episode long collection includes six episodes from the second series, when you would think it would be better to divide the two collections up and keep each series separate.

While Rayearth is a series that certainly has some issues, so far most of this collection has been fun to watch. The relationship between the three main characters is a joy, and the way they have developed makes the second collection one that will be worth watching. 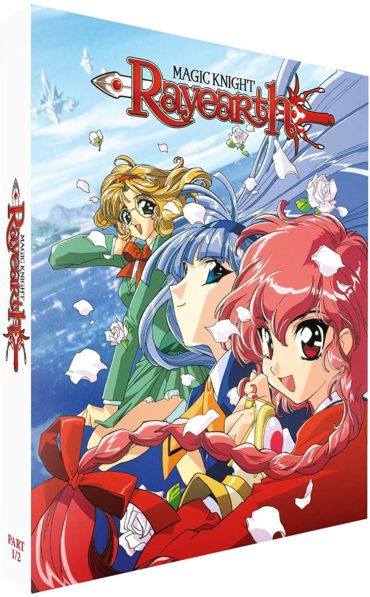