Welcome to another game of Spot the Car Reference, where we try to find as many automotive links to an anime fantasy series as we can.

That’s what it feels like watching Magic Knight Rayearth. Having watched all the series and read the original manga, it is surprising to see how many of these references you can come across: not just places and characters, but even things like ships and weapons have car references in them. I’ve come across some lists displaying some references, but nothing universal, so every time something new is mentioned, I’d have a look and sure enough something about cars crops up. It appears that CLAMP’s decision to try and make their names memorable has in at least one way worked. For the purposes of clarification, all the car references will be made clear in sections marked in square brackets.

As stated in the last review, Rayearth is a story told in two parts, and as Part 2 begins in the first collection, it is only right to begin with a summary of the beginnings of Part 2 and the events that led to this collection. 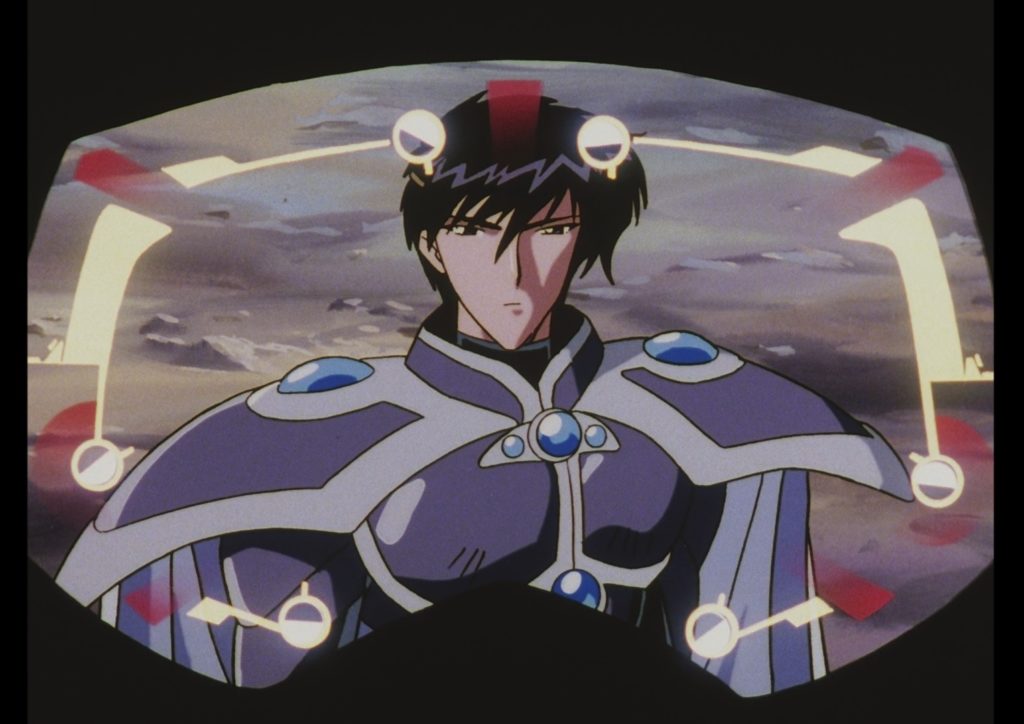 The first part of the story ended with Hikaru Shidou, Umi Ryuuzuki and Fuu Hououji finally returning home to Tokyo after helping to solve the crisis that plagued the land of Cephiro [Nissan Cefiro], killing the high priest Zagato [Italian coachbuilding firm] and, most shockingly, killing the person who brought them to Cephiro, Princess Emeraude [Mitsubishi Emeraude], whose wish was to die with her beloved Zagato. Back in Tokyo, the three girls have become rather sad and detached from modern life, and meet again in Tokyo Tower, where Hikaru wishes to return to Cephiro. Once again, the great light shines out and sends the trio to Cephiro.

However, Cephiro has changed greatly since they were last there. The loss of Emeraude means that the Pillar of Cephiro, who prays and controls the land with their will, has been lost. Thus Cephiro has started decaying and is slowly being destroyed, with the only remotely safe place in the land being a giant castle. The three girls make it to the castle, meeting some old friends as well as encountering people who previously fought for Zagato but are now fighting to support Cephiro and everyone in it.

Their old guide, the Master Mage Clef [Mazda Clef], informs the trio that things are even worse than they appear. As well as Cephiro crumbling due to there being no Pillar, flying fortresses from three other worlds have travelled to Cephiro, each with people wanting to become the Pillar themselves. 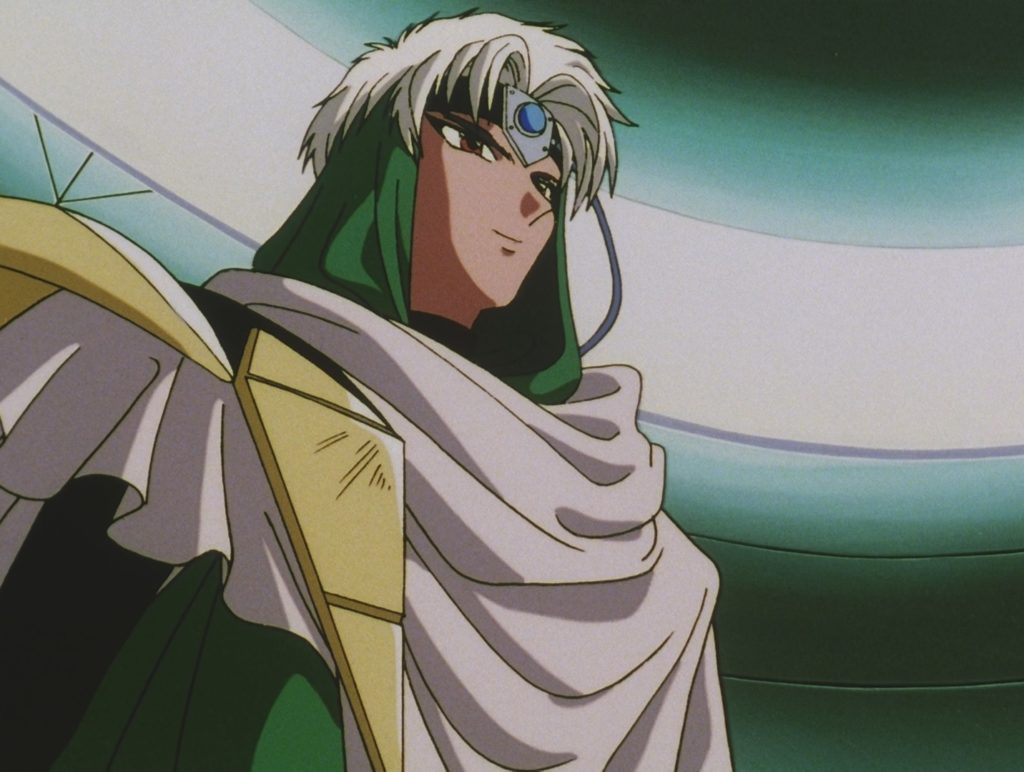 First is Autozam [ex-branch of Mazda], a technologically advanced world that is running out of energy. They are led by the sickly Eagle Vision [named after the… err… Eagle Vision, which was sold in Europe as a Chrysler], captain of the NSX [Honda NSX] which is armed with Laguna Cannons [named after the Renault Laguna or the Laguna Seca racetrack, I’m not sure which]. The other members of his crew are Geo Metro [which like “Eagle Vision”, is entirely the name of the car] and Zazu Torque [named after ZAZ car makers of Ukraine]. They mainly fight with their own mecha, the FTO and GTO [makes of Mitsubishi].

Second is Chizeta [Italian car maker], a small world that is overpopulated. Led by the princesses Tarta and Tatra [named after India’s Tata Motors and Czechia’s Tatra car company] from their fortress Bravada [Oldsmobile Bravada], the pair want to invade Cephiro in order to colonise the land. Their world is also influenced artistically by Indian/Middle Eastern styles, with the pair fighting with a pair of summoned giant djinn. 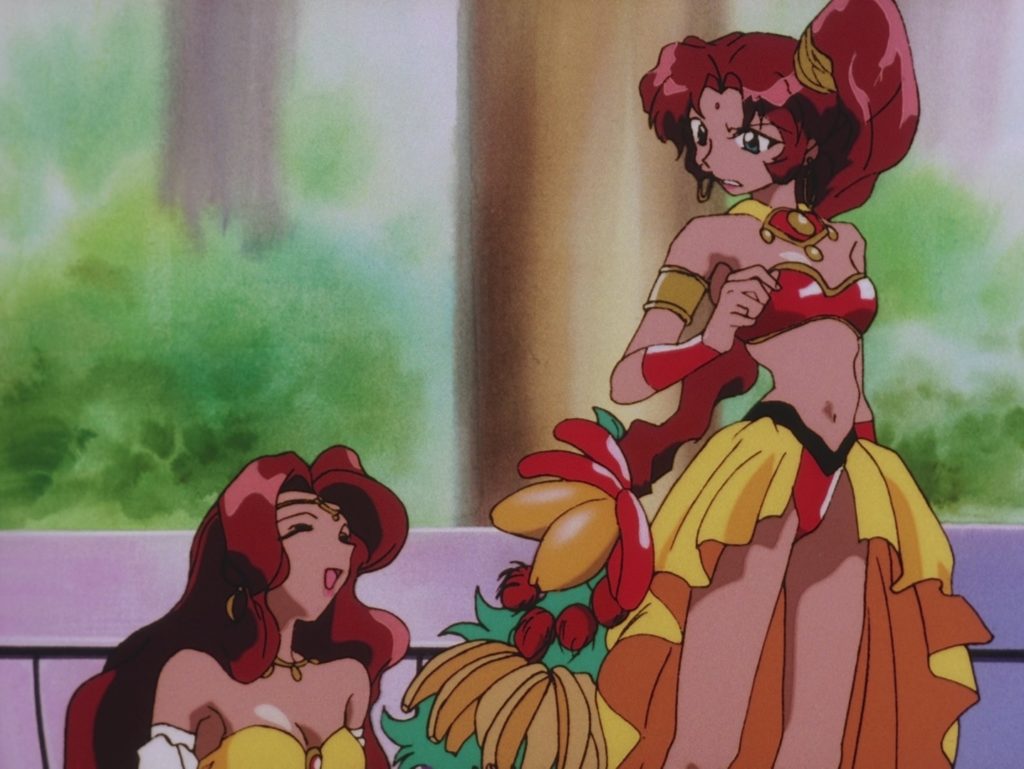 Hikaru, Umi and Fuu once again control the power of the Rune-Gods in order to fight against the invading forces as the Magic Knights. As well as their old allies supporting them, some new ones have also joined, the most interesting being Lantis [Mazda Lantis], Cephiro’s only magical swordsman, who is usually accompanied by a small fairy called Primera [Nissan Primera] who is very jealous of any woman whom she thinks is trying to separate her from Lantis. Lantis has his own problems, one of which is that we soon learn he is the younger brother of Zagato, but we also learn that he has been away from Cephiro, having spent time on Autozam in the company of Eagle.

This is still not the end of the troubles for the Magic Knights, as there is a fourth, even more malevolent invader. At first, Zagato’s old ally Alcyone [Subaru Alcyone] fights the Knights on her own, but we then learn that she is being controlled by an evil being called Debonair [Mitsubishi Debonair]. Her allies include Nova [Chevrolet Nova, rather than Vauxhall Nova], a strange girl who claims to love Hikaru but also wants to kill her. They, along with the other invaders, are all trying to become the new Pillar, and the Magic Knights will have to fight for their lives to stop them. 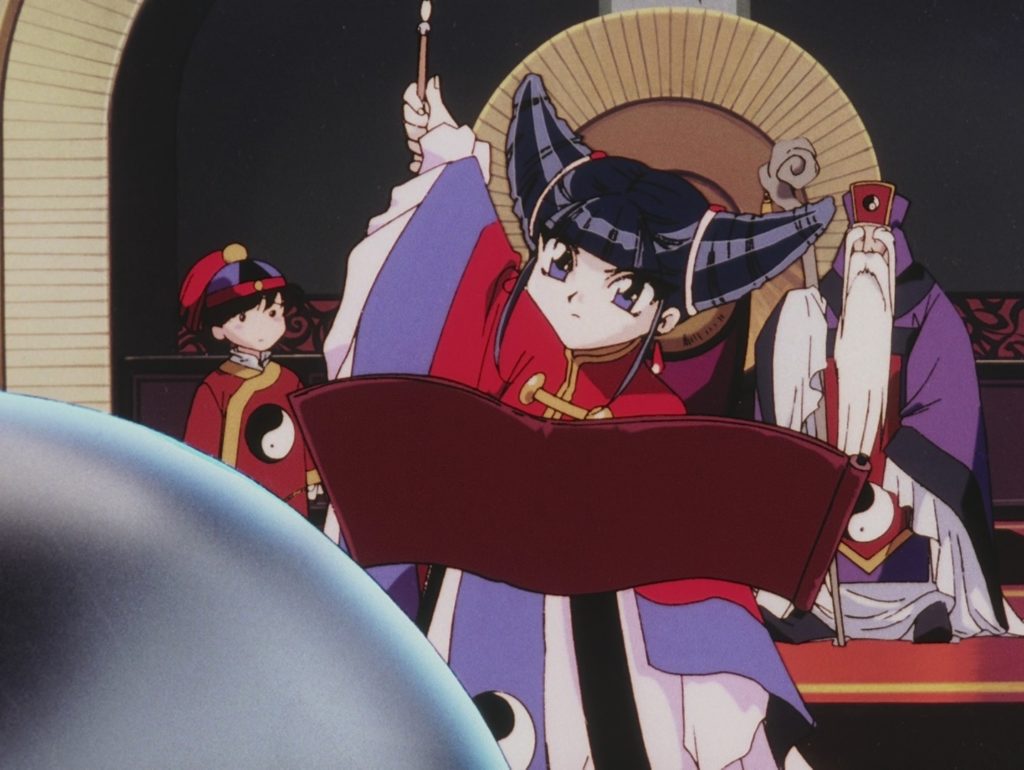 The second half of Rayearth is obviously a lot darker than the first, dealing as it does with the subject of invasion from other lands. It gets even more disturbing when Debonair and Nova become part of the story, with the relationship between Nova and Hikaru adding a psychological aspect to the drama. On top of this, there is also a philosophical element when it comes to the Pillar system that maintains Cephiro. Is it just that one person should sacrifice themselves to maintain the happiness of everyone else? Is it worth sticking to this system or should an alternative be found?

There is also a lot more action in this collection, as it sees battles between the Rune-God mecha against the various machines and spirits put forward by the various oppositions. However, there are still other things that come out to play. Mokona [named after one of CLAMP’s members], the long-eared white blobby guide to the Knights in the first half of the story still provides comedy to the story. Meanwhile the three Knights all begin to form romantic ties with people from Cephiro. Fuu had already established a relationship with the green-haired scarred swordsman Ferio [named after CLAMP’s very own green, scratched Honda Civic Ferio],while Umi became friendly with the beast summoner Ascot [Honda Ascot], one of Zagato’s former allies who has since changed his ways (and shot up in height too), but in this collection Hikaru also starts to fall for Lantis. This in turn adds to the comedy as it annoys the jealous Primera. 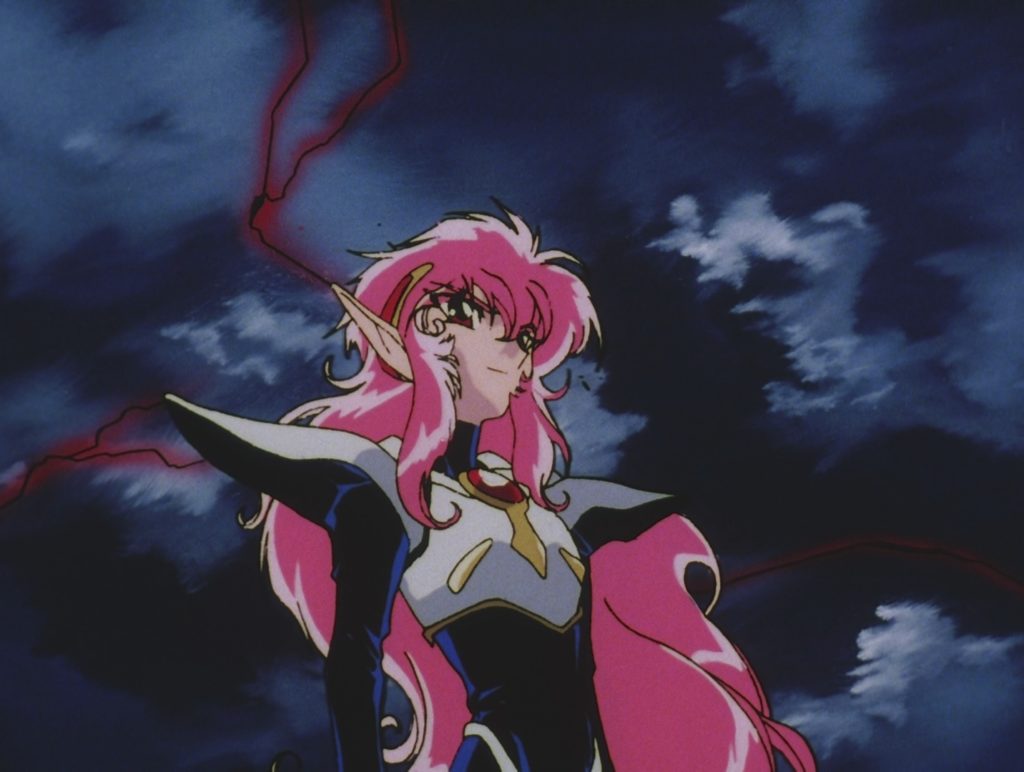 One problem that the anime has, however, is the fact that it differs considerably from the original manga, primarily because it was still being written by the time the anime ended. The plots thus are dramatically different. Debonair and Nova only appear in the anime, and Lantis’s main concern is shutting down the Pillar system altogether. Characters that are killed in the anime are alive in the manga, and vice versa. I personally prefer the manga version of the story, but the anime reworking has its own little merits too, with the way the relationships between the characters play out, as well as the action sequences that do have a punch to them.

Regarding this collection specifically, this one has a lot more extras than the first. As before, there are art cards, but on the discs there are also plenty of bonus features: interviews, outtakes and commentaries from the English cast; episode previews and bumps; recaps and omake endings; the original English pilot; trailers; slide shows of the storyboards and production art; and all of the openings and endings (personal favourite being the final opening song “Still Embracing Light and Darkness” by Naomi Tamura).

However, the main extra feature is on its own special DVD. This is the three-part OVA version of Rayearth released in 1997. This was released in the UK back in 2003 by Manga Entertainment, and was for ages the only Rayearth anime available in the country. It was also only released with an English dub. For the first time ever, we now have the original Japanese, although the release appears not to have been digitally restored in any way. Also the subtitles here spell things different in comparison to the TV version: e.g. “Fu” for “Fuu” and “RayEarth” for “Rayearth”. 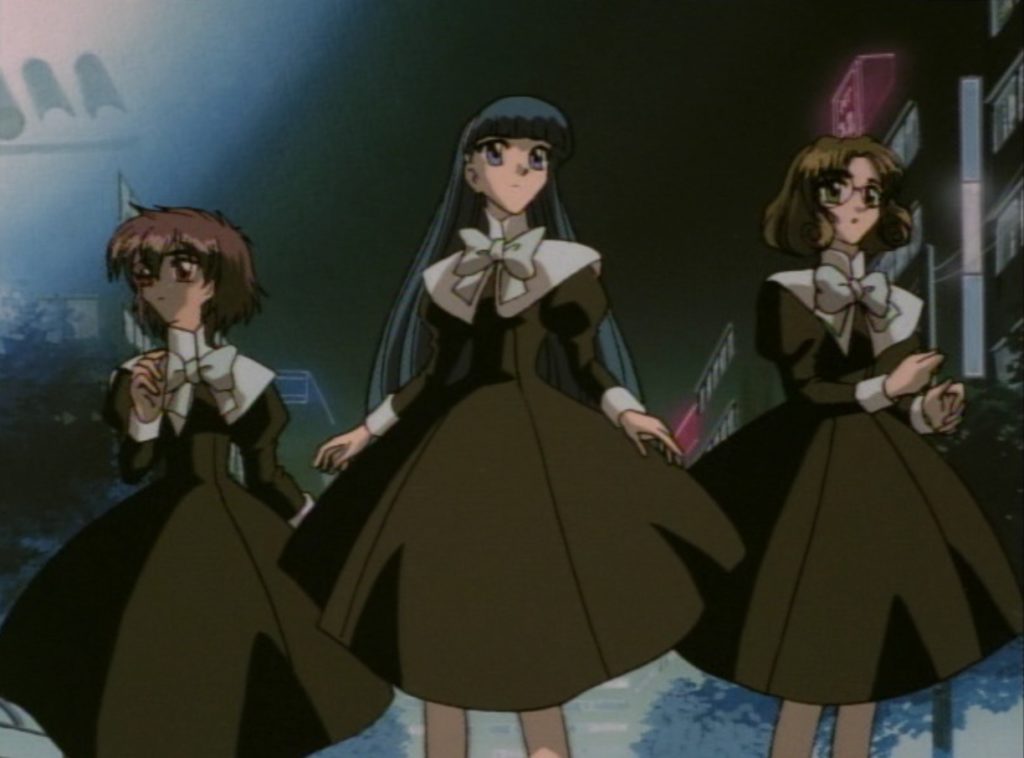 For those concerned about the differences between the original manga and the TV anime, you should know that the OVA differs the most out of all three versions of the story. Rather than coming from different schools, Hikaru, Umi and Fuu all go to the same school and are about to graduate in a week’s time, but then Tokyo is invaded by forces from Cephiro. Instead of being a story of girls travelling to a new world, the OVA tells a story of our world being under attack. While Mokona and Clef try to help the girls and provide them with magic powers, many other elements change too regarding the other characters. These include Eagle being depicted as the younger brother of Emeraude, and the one masterminding the invasion of our world. It is even darker in tone than the second half of the original story, with the people of Tokyo disappearing as the girls fight alone against the invasion. It feels more like CLAMP’s apocalyptic series X, but with added fantasy and mecha elements thrown into it.

Magic Knight Rayearth is an important series in that it helps to demonstrate the development of the CLAMP group. Having already established themselves with series like X which would go on to be written after Rayearth’s completion, and after they finished creating Rayearth for Nakayoshi magazine, their next project for this publication would become their most popular work: Cardcaptor Sakura. When you compare the three works together, you see how diverse the group are, with one series being apocalyptic and grim, the second a fantastical adventure series in another world, and the third a child-friendly magical girl story. Not only that, but they were still working on other manga while doing Rayearth; not just X, but also the Korean folktale Legend of Chun Hyang, romantic essay series The One I Love and the yuri sex comedy Miyuki-chan in Wonderland. It’s no wonder CLAMP are so popular when they can create so many works that appeal to different kinds of people.

Anyway, I’m going back to the first collection to see if I missed any more car names. 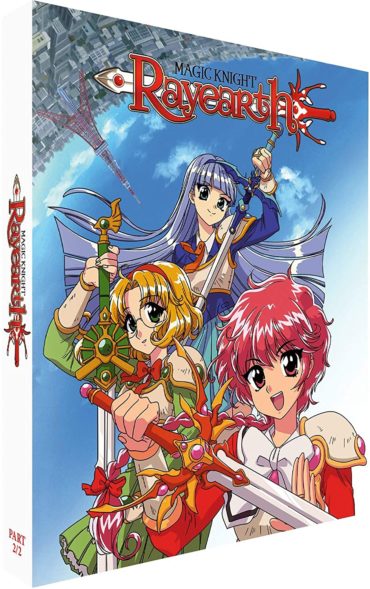