Those who follow the work of Naoki Urasawa will know that in the past his series have involved crossing paths with the work of other artists. For example, his series Pluto is based on Osamu Tezuka’s Astro Boy. This single-volume work also sees him working with another well known creation.

Mujirushi follows Takashi Kamoda, the owner of a factory that makes resin goods, who is struggling to make money. He thus avoids paying his taxes, and asks his wife what he should do with the money they save. She says they should take a cruise. However, Kamoda is caught and is subsequently punished for non-payment. His wife meanwhile wins a luxury cruise from a street lottery and goes away on her own, leaving Kamoda to look after their daughter Kasumi alone.

The cruise itself is on board the Beverly Duncan, which is owned and named after a controversial US Presidential nominee – someone with the face and attitude of Donald Trump, but the hairstyle and gender of Hillary Clinton. Kamoda is persuaded by a businessman to make rubber masks of Duncan to sell, but then suddenly Duncan tones down her awful behaviour, the opposition candidate gets caught in a scandal, Duncan easily wins the election and the demand for the masks drop.

With his debts mounting and nothing going right for him, things change when Kamoda finds a crow with a message on its leg. It reads: “Mujirushi”, meaning “sign of dreams”. It also contains a sign, a parallelogram with two parallel lines going down the middle of it, splitting it into three parts. Kamoda and Kasumi use all of this to locate a shabby building which is home to the “French Enlightenment Institute”. They enter and meet with a mysterious individual who calls himself “The Director”. He is an eccentric gentlemen wearing a bow tie, and has a thin moustache and three prominent front teeth. If you are familiar with certain anime series, who might recognise this man. He is Iyami from Osomatsu-kun.

The Director/Iyami begins to tell Kamoda and Kasumi about his trips to France. This includes meeting President Mitterrand and proposing to him the construction of the glass pyramid that forms the entrance of the Louvre. His favourite painting in the Louvre is Vermeer’s “The Lacemaker”. He loves it so much that he has made a fake one. This is where Kamoda and Kasumi become involved. The Director offers Kamoda the chance to sort out his debts if he and Kasumi travel to Paris and make the original Lacemaker “disappear” for a brief moment in time. During this time, the fake Lacemaker will be sold for a fortune, only for the original to “return” safely.

Kamoda agrees to the deal, taking Kasumi with him. Soon however, a scandal involving President Duncan and Kamoda’s fleeing wife, and the Japanese police force’s efforts to arrest the Director for art smuggling, result in Kamoda dealing with even bigger problems than the ones he has had to face previously.

One thing that should be pointed out from the start is that if you are not familiar with Osomatsu-kun or Iyami, don’t worry. I’m not that up to speed on this series either, but it won’t hamper your enjoyment. However, if you are already a fan, then you will be in no doubt be happy to see this little spin-off devoted to what is probably the most famous side character in the story. There are touches to the story throughout, with each of the chapters being referred to the French ordinal numeral and Iyami’s catchphrase “Sheeh!”

Urasawa’s trademark ability to establish and bring about a thrilling story are all on display in this single book. Not only do we have Iyami explaining his detailed scheme to make money from selling forgeries, but at the same time there is also this ongoing plot about Duncan which leads to a scandal that is accidentally exposed by one of the elements in the scam. We also have elements of a love story, with a tale of romance involving Iyami back in France.

Given Iyami’s origin in a comedy series, humour also plays its part in the series too. At a moment of tension in the scam, Kasumi loses a vuvuzela that is meant to be used to signal when her father should steal the painting. As a result, a French fireman friend who is in on the scam has to impersonate the vuvuzela instead, leading to the start of what becomes one of the major unravellings in the scam.

Although I am unable to access the name of the translator of this manga as that information was unavailable in the digital copy I was given to review, not only do there appear to be no major issues, but the translator is also able to deal equally well with both the original Japanese and also the French translations that occur in the book too.

The artwork is also worthy of highlighting. Urasawa’s depiction of Iyami looks spot-on, and he is able to add even more depth in this somewhat more serious comic in comparison to the more humorous depiction he has in the original Osomatsu-kun. Despite all of this, probably the one character that stands out the most is President Duncan. The fact that Urasawa appears to have crossbred both Trump and Clinton into one figure is very disturbing, as is the story that sees her getting elected. As well as the characters, the depictions of actual art in the museum is also worthy of praise, especially of “The Lacemaker” which is the main focus of the entire book.

Many of Urasawa’s works are pretty lengthy, and so new readers might be put off by most of them. Thus, if you are new to him, then this short work may well tempt you into examining more. Of course, this title also has the ability to make you want to learn more about Osomatsu-kun. The latter is certainly true in my case. 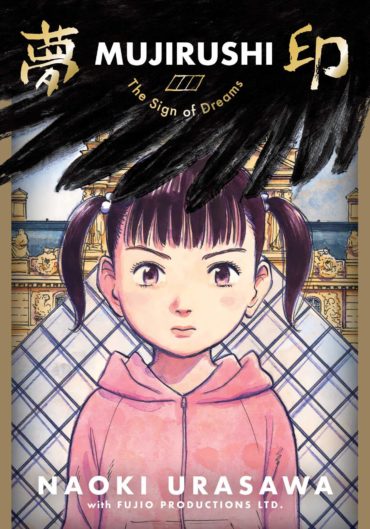