“I shouldn’t be here… but I so wanted to see you, Mashuu…”

Mayu, lively younger sister of Satoko Tawada, new to Tokyo, makes contact ‘by chance’ with teenaged Mashuu, Satoko’s ‘my boy’, and drags him off to karaoke with her just for fun. This baffles Mashuu, but he’s too polite to refuse and, of course, Mayu is Satoko’s sister, so it’s a way for him to find out more about his very special ‘Miss Satoko’. But who should they meet at karaoke but none other than Mashuu’s grandma, out for an evening’s fun with her friends and fellow K-pop fans. Mayu and Grandma instantly bond over a shared love of Korean music and drama (and one good-looking/charismatic performer in particular) resulting in an invitation for the sisters to the family house.

Satoko finds herself going along, against her better judgment, caught up in Mayu’s whirl of enthusiasm. She’s about to start a new job and may not have much spare time for a while – and she’s still painfully aware that she was warned in no uncertain terms by Mashuu’s father, stern Motoki, to stay away from his son. He was even responsible for her job move to Sendai. She has never been sure whether she should have reported Mashuu’s case as child neglect and this first visit to the house since those difficult days is going to stir up painful feelings of self-recrimination. Yet Mashuu has reassured her that his grandmother has been looking after him and his younger brother and now she’ll have the chance to see for herself. Where Mayu breezes her way in, Satoko is far more reticent and wary, tentatively introducing herself to Grandma as Mashuu’s onetime football coach. Which, in a way, she was, and yet so much more…

But then the narrative switches to Mashuu trying to do P.E. at school when feeling feverish. His childhood friend Nao Ogata offers to accompany him to the nurse’s office, where it’s obvious he’s in no fit state to stay in school. But is Grandma answering her phone?

Everything seems to be going wrong – but perhaps it’s the beginning of a different understanding between adolescent Mashuu, who’s no longer a child, and Satoko, whom he still idolizes. Thanks to his Grandma’s warmth and practical nature, Satoko now has proof that Mashuu has a stable home life. And thanks to sister Mayu’s outward-going personality, Satoko is able to relax a little around Mashuu and be true to herself again. A chance meeting at the station between Satoko and Nao Ogata leads to a girls’ shopping expedition (it’s nearly Christmas) and a hint that Satoko is changing, producing a moment for the reader – as well as Satoko – of genuine revelation. What I want is to open up Mashuu’s world. So that I can meet him there again.

Hitomi Takano shows us some new facets of the relationship between Satoko and ‘her’ boy, Mashuu. The mangaka steers just the right side of melodrama, keeping her story involving and believable (although there are two happily coincidental meetings driving the narrative forward here that strain the credibility a little). The drawings are sensitively done, as before, and the way the mangaka sometimes shows us how Mashuu views Satoko (and vice versa) is really touching.

The last pages – which I won’t spoil – are especially meaningful, expressing an important shift in Satoko’s mindset, a truly pleasing indication of change to come, a breath of fresh air…perhaps. Volume 7 is promised in 2021 from Vertical and Volume 8 has just come out in Japan. This story could go still in so many directions… and Hitomi Takano is too skillful a storyteller to opt for the predictable path. The plain but elegant Vertical Comics edition matches the earlier five volumes with Kumar Sivasubramanian’s translation deftly conveying the different voices of the characters.

If you’ve been following this unusual slice-of-life story, you won’t be disappointed by the latest instalment to be translated into English. Even though it seems at first glance that this volume is just a series of meetings, there’s a great deal going on below the surface of these ordinary people’s lives and Hitomi Takano’s skill is in making them so relatable through her art and her portrayal of her flawed but fascinating characters. 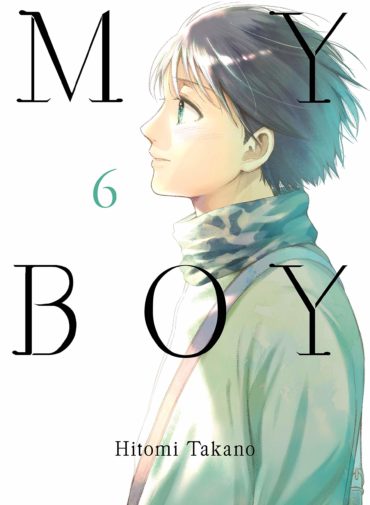