Spoilers ahead if you haven’t already read this far…

Mashuu (now in high school) and Satoko have settled into a comfortable routine: they meet up regularly in a coffee shop to study together, Satoko learning Chinese for her work, Mashuu preparing for class the next day. This suits them both well as it means they keep in regular touch. Surely no one could possibly object to them studying side-by-side in such a public place?

Mashuu has grown into a good-looking young man who attracts girls’ attentions wherever he goes (he’s constantly being asked to pose for a selfie with random strangers). And then there’s shy Nao Ogata, his classmate and childhood friend, who’s gradually realizing that she hates the female attention he’s attracting because she has feelings for him herself.

But the turbulent time in Satoko and Mashuu’s past has not been forgotten. Back then, her superior at work (and onetime boyfriend) Fumitaka Shiikawa forced her to apologize formally to Mashuu’s father for interfering in his young son’s life and precipitated her moving back to Sendai to put some distance between herself and the then twelve-year-old Mashuu. So when Hayami senior takes his sons to a VR exhibition, whom should they encounter there but Shiikawa. And Shiikawa, whose motives have never been clear, especially to himself, proceeds to talk with Mashuu. Soon it becomes obvious to the reader that Shiikawa sees Mashuu as a rival for Satoko’s affections. And when he reveals to Mashuu that he and Satoko went out together at college, Mashuu is so shocked that he’s unable to speak. The older man is shown in a less than flattering light as the conversation continues, enjoying the power he thinks he’s exerting over his younger rival for Satoko’s affections (even though Mashuu insists that he doesn’t see Satoko ‘in that way’).

This is a prelude to a conversation between Satoko and Shiikawa that maybe should have taken place years ago. Talking about Mashuu leads them to reminisce about their time at university together. One of Mashuu’s questions has been preying on Shiikawa’s mind and, over coffee, he eventually asks Satoko, “Did you ever even once feel like… you loved me?”

All the way through this beautifully drawn, thought-provoking series, Hitomi Takano has focused on the central friendship between an older woman and a lonely boy. Now that boy has matured into a high school student, their friendship is altering and deepening. But others are affected by their close bond. Shiikawa’s motivations when it comes to Satoko have seemed confused at best and more often than not, manipulative and controlling throughout the whole narrative. If he can’t have her, it seems, he’ll make sure that no one else can. Takano draws his facial reactions and body language very tellingly as he talks to Mashuu, cleverly contrasting the older man’s knowing expressions with the earnestness and honesty of the young man. More affectingly, young Nao slowly realizes as she and Mashuu hang out with their high school friends that he only has eyes for Satoko and is deeply hurt, driving her to confront Satoko in the local mall.

Certain themes have run through these volumes, one of them being the lending or giving of a handkerchief. This time, it’s Satoko who gives hers to Nao when the girl breaks down in angry tears. But the dominant theme that recurs throughout these chapters is that of ‘the person’. When Mashuu is challenged by Shiikawa, saying, “You think of Satoko as a woman, don’t you?” the young man replies, “I think of Miss Satoko… as a person.” Coming away from the confrontation, Shiikawa bursts into mirthless laughter at Mashuu’s response, startling one of his co-workers – but later we see him deep in self-examination, reflecting on his past before seeking out Satoko to discuss what’s been troubling him, it seems, for a long time. Perhaps it’s a little late in the day to delve into Shiikawa’s troubled backstory but it enables us to learn more about his and Satoko’s time together as students – and explain why he treated Satoko so unsympathetically. However, thinking back to university days reminds Satoko of a class in which Plato’s Symposium featured, especially the theory that humans were originally creatures with two heads, four arms and four legs – and were then split in half and separated, only to spend their lives searching for their missing half to become whole once more.

The Vertical edition benefits (as in earlier volumes) from a very readable translation by Kumar Sivasubramanian; there are no notes but a helpful one-page summary of the story at the beginning, with character profiles.

The ninth volume (due out in March 2022) will be the last – and it will be fascinating to see what kind of resolution Takano will offer her readers. The implications throughout the volumes have been that certain people are soul-mates, no matter what difference there might be in age between them, and like Plato’s incomplete, divided humans, they will search for their other halves so they can become whole. But will the mangaka allow her characters a ‘happy’ ending? 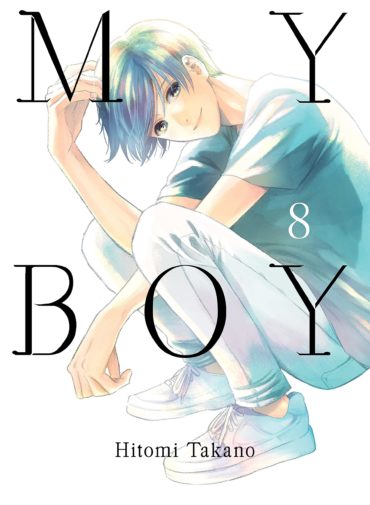