Having been away from the series for six months or so, it’s finally time to dive back into Rent-A-Girlfriend with Volume 5. But has the absence made me grow fonder of this romantic comedy? Let’s find out!

Back in Volume 4, Kazuya found himself faced with the new girl, Ruka, who quickly confessed her feelings for our protagonist and twisted his arm into becoming her boyfriend. With Ruka knowing the truth about Mizuhara’s job as a rental girlfriend and Kazuya dreaming of having a real girlfriend, he reluctantly agrees to date her.

This brings us to the start of Volume 5, where Ruka is confronting Kazuya about his feelings for Mizuhara, having worked out that there is more to their relationship than meets the eye. Faced with no other choice, Kazuya finally tells her about how his and Mizuhara’s grandmothers are friends and would be heartbroken to find out Kazuya and Mizuhara weren’t actually dating.

Shortly after telling Ruka the truth, Kazuya and Mizuhara are set to have a family dinner with Kazuya’s parents and grandmother. Having found out about this, Ruka turns up at the restaurant and proudly declares herself Kazuya’s girlfriend, which sets off all sorts of trouble!

In classic Rent-A-Girlfriend style, Kazuya manages to lie his way out of the situation in a way that is sure to come back to bite him later on in the series. While the storyline with Ruka takes up a substantial part of this book, the second half focuses on Kazuya’s friend Shun going on a date with Mizuhara.

Shun previously rented Ruka before she started dating our protagonist and it turns out that Shun had strong feelings for her, so he’s heartbroken by her falling for Kazuya. Hoping to break him out of his funk, Kazuya arranges for Shun to go on a date with Mizuhara who can show him there are plenty of other fish in the sea (even if you just rent someone).

Perhaps the best thing about Volume 5 is the fact that so little time is spent directly with Kazuya. Yes, he’s a big part of the storyline with Ruka, but this book is more focused on Ruka and Mizuhara. This is certainly a welcome change, given the fact that Kazuya can often be the biggest problem the series has. Ruka, in particular, has a much more grounded storyline than a lot of the other characters, so more time spent with her is always welcome.

In the last chapter of the book, we’re introduced to a new rental girlfriend who I’m looking forward to seeing more of since she wasn’t in the anime adaptation all that much. Of course, I’m sure many readers will groan about the inclusion of yet another female character, but I think that, provided she’s not also head over heels for Kazuya, she’ll make an interesting addition.

What’s most impressive about Rent-A-Girlfriend is that, even after five volumes, I’m still very attached to the overall story. While it certainly has its issues here and there, I can’t look away from whatever new train wreck our protagonist finds himself involved in next! I do think author Reiji Miyajima deserves praise for creating something which is in equal parts fascinating and ridiculous; it’s great fun. Provided you switch your brain off and can ignore some of the issues, of course.

Rent-A-Girlfriend Volume 5 comes to the West thanks to Kodansha Comics and has been translated by Kevin Gifford. As always the translation reads well with no issues to note. Volume 6 of the series is already available with Volume 7 due out in July.

Overall, Volume 5 of Rent-A-Girlfriend proves itself one of the stronger entries in the series with Kazuya taking a back seat to Mizuhara and Ruka. With the introduction of a new character fast approaching, this has been a good opportunity to take a break and flesh out the cast we already have. 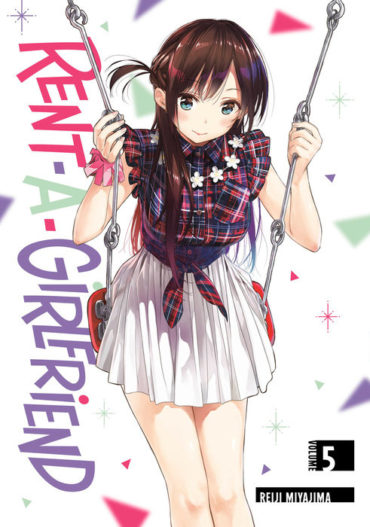