In the previous volume of Rent-A-Girlfriend, protagonist Kazuya went on a trip to the beach with his friends and ex-girlfriend Mami. At the beach, he ran into rental girlfriend Mizuhara and her group of friends where one thing led to another and somehow the two ended up taking a boat trip together. However, disaster struck and Mizuhara fell overboard with Kazuya swiftly jumping in to save her! As we reunite with our cast in Volume 3, we find out if both of them are okay…

Although it was Kazuya who jumped into the water to save Mizuhara, when she wakes up on shore, she finds Kazuya unconscious beside her and quickly performs CPR, which thankfully brings him back to life. With no lasting damage, the two are free to go home after an overnight stay in the hospital, but now they can’t get each other off their minds!

Being saved by Kazuya causes Mizuhara to realise she’s become somewhat attached to this idiot and although it hasn’t quite blossomed into love, there is definitely an attraction there. Meanwhile, Kazuya’s stunt on the boat led him to miss meeting up with Mami, but despite having hoped to get back with her in Volume 2, he’s not too bothered now. Even when he tries to daydream about sleeping with Mami,  his mind quickly wanders to Mizuhara.

Things are made all the worse when Kazuya and Mizuhara’s grandmothers scheme to get them to sleep together on a hot spring trip they’ve booked! The two are stuck sleeping in the same room and spending the day together, which leads Kazuya to realise he wants to get to know the real Mizuhara, not just the perfect persona she puts on as a rental girlfriend.

Compared to the first two instalments of Rent-A-Girlfriend’s manga this entry is more heartfelt. I still don’t believe Kazuya is a good protagonist (or frankly a decent human being), but it’s easier to understand his fascination with Mizuhara after being saved by her. The same can be said for Mizuhara, who is always at her best when she’s being honest with this idiot main character.

Most of all I think this storyline has given Kazuya some much-needed maturity. Instead of simply thinking about himself he’s starting to think about the feelings of those around him, especially the girls. He’s still a long way from being likeable, but this arc does give me some hope for his future.

That said, just having Mizuhara more involved instantly made the manga better than in Volume 2 (where she wasn’t present for half the volume). She’s the most grounded character in the series and the only one with any concept of right or wrong. It’s nice to see her vulnerable for once as she battles with her feelings for Kazuya and slowly realises she likes him.

Of course, Rent-A-Girlfriend is a drama and so neither character is going to be given time to work these feelings out. Yet another new girl is introduced at the end of this volume, one who seems to know Mizuhara’s secret! This bombshell is sure to be the core of the next volume and I’m eager to see how it plays out, even if slightly disappointed to have another character introduced already.

Volume 3 of Rent-A-Girlfriend comes to the West thanks to Kodansha Comics and continues to be translated by Kevin Gifford. The translation reads well with no issues to note. Kodansha has Volume 4 of the series scheduled for release in December.

Overall, Volume 3 of Rent-A-Girlfriend is a significant improvement on the previous instalment. Both Mizuhara and Kazuya have received notable character development and although the series still has problems, it’s still an enjoyable read if you can overlook the flaws. 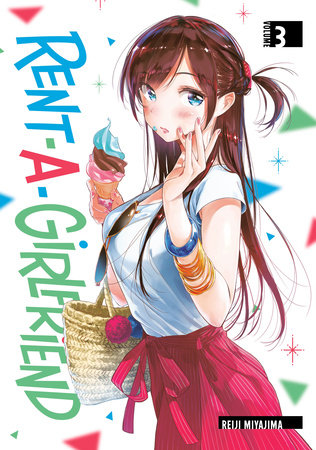