At the beginning of the year, publisher Yen Press began releasing light novel series Wandering Witch: The Journey of Elaina, which I reviewed and felt was inconsistent in tone. Nevertheless, I liked the series enough to take a look at the manga adaptation, which Square Enix has started to release. Does it prove a better read? Let’s find out!

The story follows Elaina, a witch who, inspired by tales she read in her childhood, has become a travelling witch. Elaina never stays in one place for long since she wants to see everything the world has to offer. This is the story of the countries she visits and the people she meets along the way – both good and bad.

Volume 1 of the series contains four chapters, all focused on a different story. The first sees Elaina meet a novice witch who is looking for someone to mentor her to pass the witches’ exam. The second tale sees her coming upon a man-eating field of flowers, while the third finds her in a town with inflated costs, thanks to fake currency. The final entry in the book sheds light on Elaina’s backstory and how she became a witch and left her hometown behind.

When I reviewed the light novel I complained that the tone of the series was all over the place. Elaina is a plucky, confident woman but in the source material she came off as being too calm and chipper for the grim situations she often found herself in. With very little of her inner thoughts making it into the manga adaption, her personality feels like it fits better and rids the series of the disjointedness I felt reading the light novels.

I think the manga also benefits from having fewer and more varied stories in this first volume. While the tale about the flower field is not for the faint-hearted, the rest are entertaining and fun to read. It doesn’t leave a shadow of gloom over you which, when things are said and done, was a problem with the source.

It’s not often that I find myself enjoying an adaptation more than the original work, but in this case, the manga adaptation of Wandering Witch surpassed my expectations. It leaves me wanting to tell lapsed readers of the light novels or even newcomers to the series to begin with the manga. The series feels like it’s better suited to this medium and less likely to get bogged down by Elaina’s narration.

Mangaka Itsuki Nanao (who also works on the manga adaptation of The Apothecary Diaries) has brought the world to life with detailed, memorable artwork. Nanao gives Elaina a wide range of expressions, which work successfully in any situation. The art is well rounded, with Nanao successfully conveying both the comedy and the darker moments of the story. It leaves me excited to see how they will cover upcoming stories in the series.

As previously mentioned, this series comes to the West thanks to Square Enix and has been translated by Taylor Engel. The translation reads well with no issues to speak of and seems consistent with the light novel, despite being a different translator. The series is on-going at 2 volumes in Japan and Square Enix currently have Volume 2 scheduled for release in English in December.

Overall, Wandering Witch: The Journey of Elaina Volume 1 proves an entertaining read with a likeable protagonist and interesting stories. This manga adaptation is the best way to experience Elaina’s tale, with beautiful artwork that conveys the world and characters feelings wonderfully. Both readers new to the series and those who have read the source material will find a lot to like here.

A free preview of the manga can be read here. 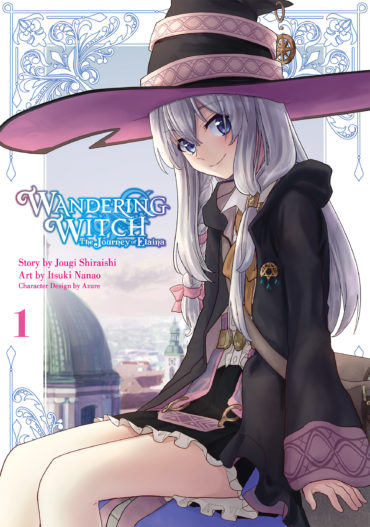