New manga publisher Square Enix Manga hasn’t been around long, but already they’ve delivered a variety of series such as A Man and His Cat, Hi Score Girl, and Cherry Magic! Thirty Years of Virginity Can Make You a Wizard?!. However, until now the company has been lacking a solid fantasy adventure. Today we’re taking a look at Volume 1 of Suppose a Kid From the Last Dungeon Boonies Moved to a Starter Town, which is here to fill that empty slot.

The story follows Lloyd Belladonna, who dreams of nothing more than becoming a soldier in the capital city of the Azami Kingdom. Lloyd currently lives in the small but – unbeknownst to him – legendary  town of Kunlun, whose village chief Alka is reluctant to let the boy set out on his own. One day she finally gives in to Lloyd’s demands, but only on the condition that he seeks out a witch called Marie who will look after him. Lloyd readily agrees and sets out, but will the capital prove to be tougher than the young boy expected?

At first, Marie refuses to take Lloyd in, but after he explains that Alka sent him, she quickly changes her tune. It turns out that Alka used to be Marie’s mentor, but more than that, the idea that Lloyd has come from Kunlun catches her interest.

It turns out that Kunlun is known for creating heroes who serve to defeat demon lords and otherwise unstoppable evil. Lloyd believes himself to be weak but by normal standards, he’s one of the most powerful people in the kingdom! So begins the tale of a boy who believes himself to be a weakling, and the world that’s unprepared for his unmatchable powers.

While this first volume of Dungeon Boonies (as we’ll refer to it), spends most of its time setting up the world and introducing the cast, it still finds time for Lloyd to get himself caught up in adventures. He has to go through a test to become a soldier, but while waiting for that, Marie puts the boy through his paces.

Even simple things like being asked to do some shopping lead Lloyd to run to the next town over just to get the cheapest prices, solving various issues on the way. His approach to life is nothing like a normal person’s and so Marie sets about trying to beat better sensibilities into him, while being shocked by his strength.

What makes this series fun is that all of the cast are very sweet and easy to grow attached to. While characters like Lloyd are often annoying in other series when they refuse to acknowledge their abilities, he’s so cheerful it’s hard to feel anything negative toward him. He’s a great protagonist and his airheadedness is balanced out well by Marie.

This manga adaptation has been created by Hajime Fusemachi, who brings the series to life incredibly well. Dungeon Boonies is originally a light novel series (with an anime adaptation in the works too), but you wouldn’t notice if you didn’t know better. Unlike some light novel adaptations, Dungeon Boonies feels like it was ready-made for manga.

Perhaps the most important thing is that Fusemachi excels at capturing the comedy elements of the story. Character expressions are exaggerated and heighten the impact of the dialogue or situation the  cast find themselves in. Even away from the comedy, Fusemachi does well to convey the fantasy world of the series and while panels can be quite busy from scene to scene, they do a good job of drawing your eye to the important things. I’m excited to see how the artwork will change as we get into more fight scenes, which presumably will happen next volume.

As previously mentioned, this release comes to the West thanks to Square Enix Manga and has been translated by Andrew Cunningham who also translates the original light novels for Yen Press. The translation reads well with no issues to note. The release itself is smaller than Square Enix’s other books so far, coming in at roughly the same size as a Seven Seas manga (which I honestly prefer). It’s also worth noting that there’s a colour page included at the beginning.

Overall, Suppose a Kid From the Last Dungeon Boonies Moved to a Starter Town offers an entertaining fantasy adventure. While an overpowered protagonist unaware of their powers is certainly not a new idea, the characters and striking art style more than make up for it. This is a release not to be missed!

A free preview of Volume 1 can be found on the Square Enix Manga website here. 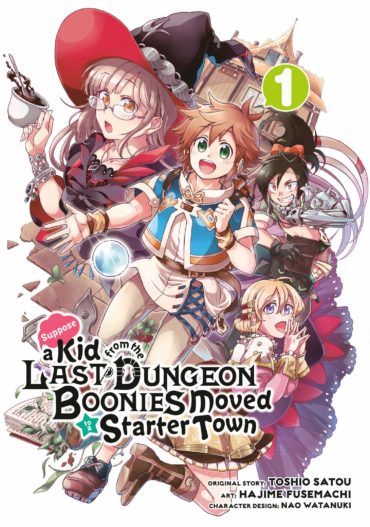