Pianist and teacher, widower Fuyuki Kanda has taken the plunge and become the owner of a cat: one-year-old exotic shorthair Fukumaru. Even though Fukumaru is not the prettiest of cats, Mr. Kanda falls in love with him straight away, even though he’s never been a pet owner before. His best friend Kobayashi is a dog enthusiast and can’t understand why Mr. Kanda has opted for a feline companion. But as Fukumaru and his doting owner begin to learn how to live together in harmony, we get to learn more about the reasons why it’s taken the man so long to commit to looking after a pet. An extended flashback shows us Mr. Kanda’s strict upbringing (lots of piano practice!) and germaphobe mother meant that he was forbidden from touching ‘filthy  animals’ or playing with the local children when he was a child. We also get to see some touching memories of Mr. Kanda’s late wife – and the fact that they were discussing getting a cat because she’d always wanted to have one, before tragic events overtook them. And, an intriguing glimpse into the childhood of one of Mr. Kanda’s younger colleagues at the music centre, Yoshiharu Moriyama, reveals a child whose early dreams of making music have been  tarnished by their ambitious family and a prodigiously talented little brother.

Interspersed with these flashbacks are many 4-koma pages showing life with ‘Daddy’ from Fukumaru’s point of view – and Mr. Kanda’s affectionate bafflement at some of his cat’s behaviours: hair balls, sofa-scratching, cat toys, litter scuffing. It’s still all-out war between Fukumaru and the hated grand piano – ‘The Black Thing’ – which the cat thinks takes up far too much of his Daddy’s time. The artwork from creator Umi Sakurai is still a little rough-and-ready at times, but there’s no doubting the warmth of her feelings toward her characters, whether feline or human. However, the text and the images tread a very fine line between genuinely affecting the reader’s feelings and slipping into sentimentality. We understand that Fukumaru has saved Mr. Kanda from a lonely life without his beloved wife and Mr. Kanda has saved Fukumaru from languishing in the pet shop unadopted because he’s ‘different’ and ‘ugly’. But the message doesn’t need to be continually reinforced by the second volume – and new developments, such as Mr. Kanda permitting himself – at last – to pet Kobayashi’s beloved dog Chako are a promising sign that he’s beginning to recover from his bereavement. The time scheme skips around from past to present, perhaps because this is a web-manga (and has won an award in Japan in this category) and is first delivered to readers in bite-size episodes before being gathered up into a tankoubon. This doesn’t help in terms of linear plot development – but, perhaps, this story is meant to be consumed this way, a little at a time.

As with the first volume, Square Enix have used good quality paper and included four colour images at front and back, including one very cute 4-koma page of the cat’s owner in cosplay. The translation by Taylor Engel continues to give us Fukumaru’s ‘meowy’ voice very convincingly: ‘Fukumaru Furry Flurry P-P-P-P-Punch!!!’(attacking his own reflection in the mirror, because…). It’s another nicely produced volume which any cat owner or enthusiast will be happy to own and dip into! I can only hope that in subsequent volumes Umi Sakurai can keep the delicate balance between gentle humour and sentiment just right. Fukumaru’s personality (more than a little tsundere) will probably go a long way to ensuring his story stays the right side of the line. 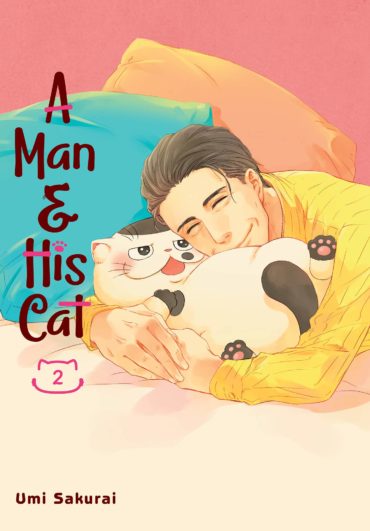 Title
A Man & His Cat Volume 2

Age rating
A All ages

A Man & His Cat Volume 7 Review

Enter Geoffroy Lambert, the handsome and charismatic concert pianist who’s been nursing a grudge against Fuyuki Kanda for many years. Why has he suddenly asked Mr. Kanda if he can study piano with him? Find out in Volume 7 of A Man & His Cat (and look out for kittens)!