Retired concert pianist Mr Kanda and his year-old exotic shorthair cat Fukumaru are still learning about each other and now the time has come for the widower pianist to arrange for a procedure at the vets that most cats undergo these days. Or as the nice lady at the pet shop cheerily puts it, “He needs to have his cherries picked!” But it’s hard to tell who finds this more painful: Fukumaru or his tender-hearted owner!

Since his wife’s death, Mr Kanda has been unable to carry on his career as a concert pianist, turning instead to teaching and avoiding performing in public. We learn more about how this trauma came about when his young, enthusiastic and irrepressible colleague, Moriyama, insists on taking him to a concert by Kanade Hibino. Kanda’s kindly nature leads him to agree to go, not wanting to disappoint the young man, but the stress is so great that he has to leave halfway through. Moriyama is mortified – especially when he learns about Kanda’s past from other teachers at the music centre (he was oblivious up till now). But Kanda, not wanting Moriyama to feel bad about the experience, invites him round – and it’s love at first sight between Moriyama and Fukumaru.

Meanwhile, Kanade Hibino noticed Kanda – once his idol and his rival – leaving his recital halfway through and it stirs up all kinds of bitter memories for him. But there’s no time to brood when his mother suddenly descends to blithely hand over her cat Marin as she’s moving to a new property where pets aren’t allowed. Hibino, seething at the imposition, hasn’t a clue what to do with a cat and ends up in the pet shop buying stuff when who should he run into – literally – but Kanda?

It’s been a while since Square Enix brought us the next volume in the popular 6-volume (ongoing) series by Umi Sakurai and in the meantime a live action TV series has come out in Japan! Interspersed between the human drama chapters (and it really is turning into quite a drama with buried resentments, trauma and life-inflicted wounds scarring the three musicians) are chapters about Fukumaru’s memories of being a kitten, being the runt of the litter, and his beloved mother). For all the humorous 4-koma moments between chapters, it’s become quite the melodrama (no pun intended) with everyone’s emotions dialled up to 11.

Like several manga currently appearing in translation in the US (Monster and the Beast, Sasake and Miyano, Cherry Magic), A Man & His Cat began on the internet, in this case on Twitter, and moved to Gangan Pixiv and Monthly Shonen Gangan, allowing mangaka Umi Sakurai to ‘develop it in lots of ways!’ (according to the Afterword). By this third volume, I find the alternating of the humorous moments with Fukumaru and the deeply painful moments to be rather awkward, especially those dealing with Kanda trying to come to terms with his wife’s death (and the revelation here that perhaps he wasn’t at home in her last days as he could have been, carrying on his busy career as a performer). Moriyama is an endearing character, filled with youthful enthusiasm, composing songs for his group to play – but even he is portrayed as reacting to everything at 110%, making for an exhausting read. I find this series works best when Fukumaru is behaving like a cat and there’s less anthropomorphizing going on. The ‘I love you!’ has now been done so often that it comes across as rather mawkish and oversentimental, losing its impact. And I’m a cat person! (For a more realistic depiction of a cat and their owner, try With a Dog AND a Cat Every Day is Fun by Hidechi Matsumoto (and check out our review!)).

However, your mileage may vary, and there’s no doubt that the handsome large format edition given to this series by Square Enix Manga (colour pages at the front and the end, good quality paper) is a very attractive way to read this manga. The translation by Taylor Engel continues to convey Fukumaru’s meowy way of ‘speaking’ amusingly and Lyn Blakeslee’s varied lettering choices deal well with the range of emotions (so many feelings!).

A Man & His Cat delves deeper into Fuyuki Handa’s past as a concert pianist as his life with Fukumaru continues and the focus of the story shifts onto another man and his mother’s cat. 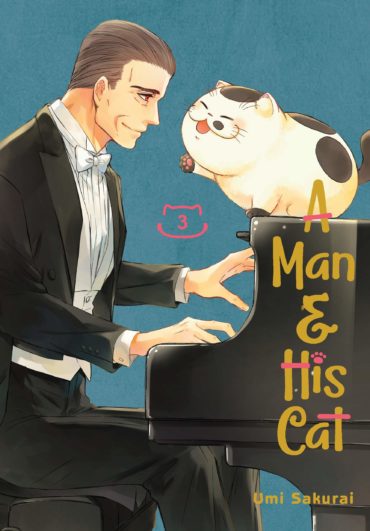 Title
A Man & His Cat Volume 3

A Man & His Cat Volume 7 Review

Enter Geoffroy Lambert, the handsome and charismatic concert pianist who’s been nursing a grudge against Fuyuki Kanda for many years. Why has he suddenly asked Mr. Kanda if he can study piano with him? Find out in Volume 7 of A Man & His Cat (and look out for kittens)!